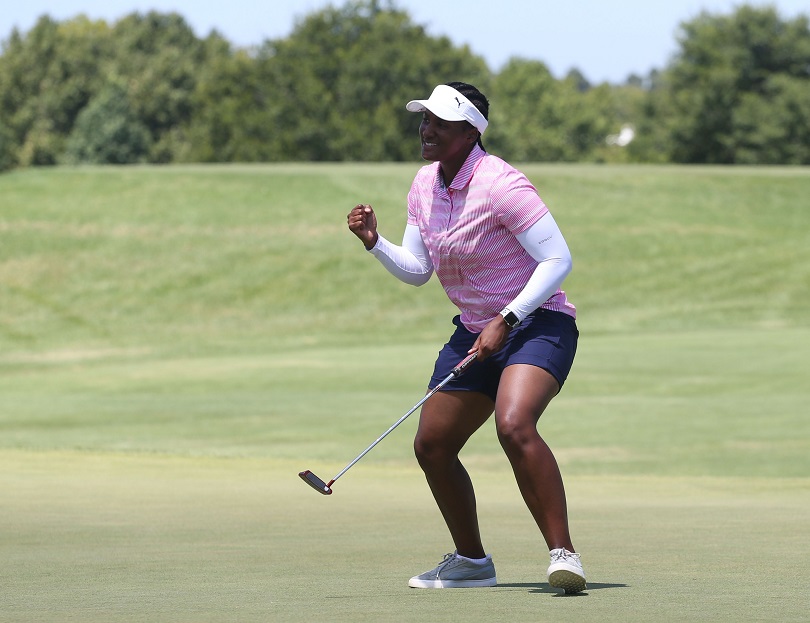 On a tense and dramatic Sunday at Fancourt, Nobuhle Dlamini drained a 32 foot uphill birdie putt at the final hole of the Outeniqua Course to seal a Sunshine Ladies Tour hat-trick with a two-shot victory in the Dimension Data Challenge.

Just a few minutes earlier, the big-hitting Swazi golfer tapped in for well-timed four at the par five 17th to take a one-shot lead. The birdie-birdie finish for a five-under-par 67 earned Dlamini a R70 000 pay-day on a winning total of two-under 214.

“I had to really stop myself from running around on the green when that last putt dropped,” said the delighted Dlamini, who banked an additional R30K for partnering amateur Francis Tremearne to victory in the Betterball Team Competition.

“I was so excited, but Brittney (Fay-Berger) still had to putt. I played the 17th hole exactly as I planned and I wanted to get the birdie at 18 to have a bit of a cushion. Britt and I both hit good tee shots up the 18th fairway, but her approach took a huge bounce off the back.

“You don’t want to hit it past the flag and leave yourself a slippery and fast downhill putt, so I told my caddie I’m going to hit it seven foot short. It came up a lot shorter, but it was the right call. I had a one-shot lead. At worst, I’d be in a play-off. The moment I stroked the ball it looked good.”

Dlamini posted rounds of 76 and 71 over the first two days at George Golf Club and was four shots behind joint leaders Monique Smit and Bertine Faber when the action moved to Fancourt.

Smit gave the local crowd reason to cheer with a birdie start, Faber matched her birdie with one of her own at the second and Dlamini kept pace with her first birdie at the second.

While Smit and Faber slowly faded out of contention, Kim Williams made a run for the lead with birdies at two, seven and 10. The three-time Sunshine Ladies Tour winner led the field on three-under for most of the day, but Dlamini put the field Williams on notice with a run of birdies from seven.

“I just holed a bunch of really good putts,” said the 27-year-old Dlamini

“I missed very few fairways and I hit my irons and wedges really good. I bogeyed 11 but I birdied 14 to stay within two shots of Kim. As I walked to the 17th tee, I saw Kim was in trouble and I figured she might drop a shot at shot.

“I hit three-wood down the middle, but I just missed the green with my approach. I chipped it give, though and that gave me a one shot lead after Kim made a double at 16.”

Dlamini had a short, but tense wait to know for certain. “Ivanna (Samu) or Lejan (Lethwaite) were level par and if one of them made an eagle, it would be a play-off,” Dlamini said. “It was a bit tense, because everyone was coming to congratulate me, but I don’t count my chickens before they hatch.

I never count my chickens before they hatch. Only after they finished on level-par, I let that winning feeling flow over me.”

Dlamini battled with a knee injury at the start of the sixth Sunshine Ladies Tour season and posted an unmemorable top 20 finish in the Canon Sunshine Ladies Tour Open, but the form that took her to winner’s circle twice last year showed up during Serengeti Team Championship.

“I saw a physiotherapist after Irene and I was back to full strength and was striking the ball really well at Serengeti. I felt I was playing well enough to win, and after the three birdies on the front, I knew I could win if I kept patient and stuck to the game plan.

“This is one of my absolutely favourite events and I look forward coming to Fancourt every year. I am extremely proud to join the list of Dimension Data winners. I only got into the one Ladies European Tour event and I decided to stay in South Africa. Next week I’m going trophy hunting in the SA Women’s Masters and I can’t wait to defend my SuperSport Ladies Challenge title the Wild Coast in two weeks.”

Samu and Lewthwaite both closed with rounds of 69 to tie for second.

Williams carded a 73 with a double bogey finish and tied for fourth on two-over with GolfRSA Elite Squad amateur Kajal Mistry, who also registered a 73.

All competitors RSA unless otherwise specified and amateurs indicated as AMA