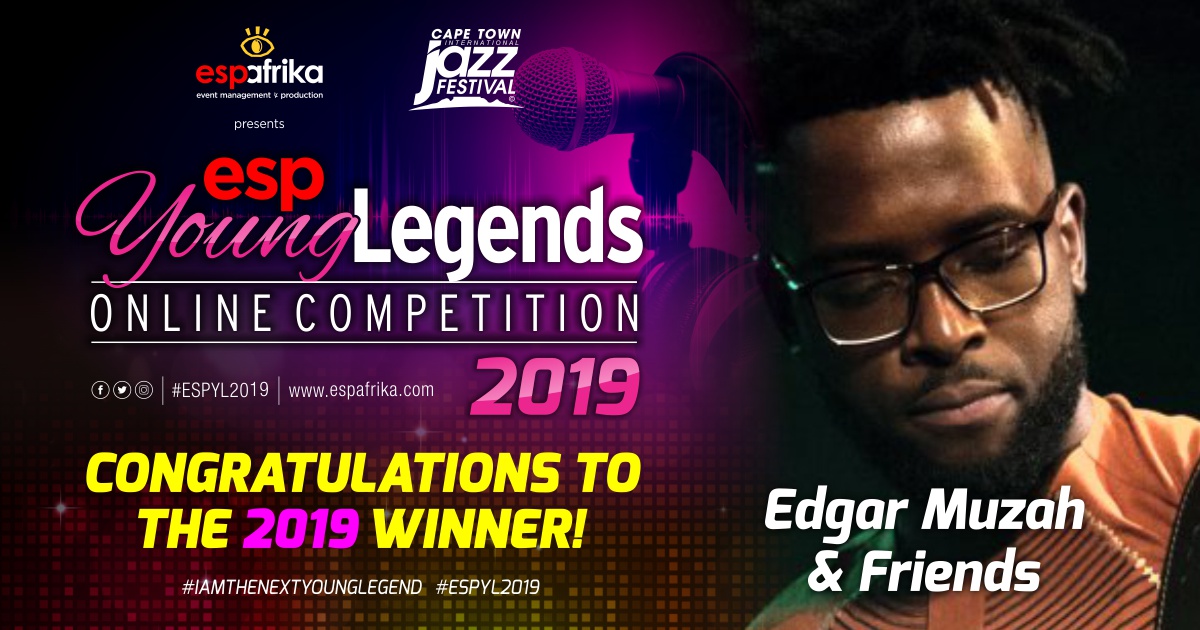 Muzah currently lives in Port Elizabeth in the Eastern Cape and plays with Take Note, one of South Africa’s fresh, young bands. The espYoungLegends competition is all about ensuring that new talent gets stage space alongside some of the greatest, more experienced jazz musicians in the business.

Muzah has been hard at work making a name for himself though. He has already gained international experience, performing in various countries as a session musician for other artists. He has also worked with a number of artists as a producer and composer.

One of the recent albums he worked on was with Zimbabwean world music artist Willis Wataffi. This effort received three Zimbabwe Music Awards in March 2016.

Muzah’s first solo outing, Project Dimensions, featured most of the artists he has worked with, produced and written music for. It received recognition in Finland, England and Germany where he was scheduled to tour in early 2017.

“I owe every step of my journey as a musician to the giants, people I have worked with, who have mentored me to be the musician that I am. I am grateful to the great Chaka Chawasarira and Oliver Mtukudzi for being fathers to my craft,” says an elated Muzah.

“We are committed to nurturing young talent. This is part of our legacy. We want to ensure that future generations of artists are able to access opportunities. We owe it to the future of jazz, which has served us so well, to give young artists a chance at the CTIJF,” says Domingo.

CTIJF 2019 celebrates the last 20 years of international and local jazz, and is set to take place on 29 & 30 March 2019 at the Cape Town International Convention Centre.

Tickets for CTIJF 2019 are available exclusively at Computicket. CTIJF 2019 Weekend Passes will remain the same price as last year:

Official sponsors of the 20th annual Cape Town International Jazz Festival are the Department of Arts and Culture, Independent Media, AYO Technology Solutions and host city, the City of Cape Town. Other sponsors include Coca Cola, M-Net and Diageo.

CTIJF 2019 Premier Hospitality packages are on sale now. Celebrate 20 years of jazz, with the very best that Africa’s Grandest Gathering has to offer in 2019! Contact Samantha Pienaar on 021 671 05 06 or email hospitality@espafrika.com for more information.

The CTIJF 2018 After-Movie shows what the CTIJF has to offer and can be viewed at the link: http://bit.ly/2NXqFf3