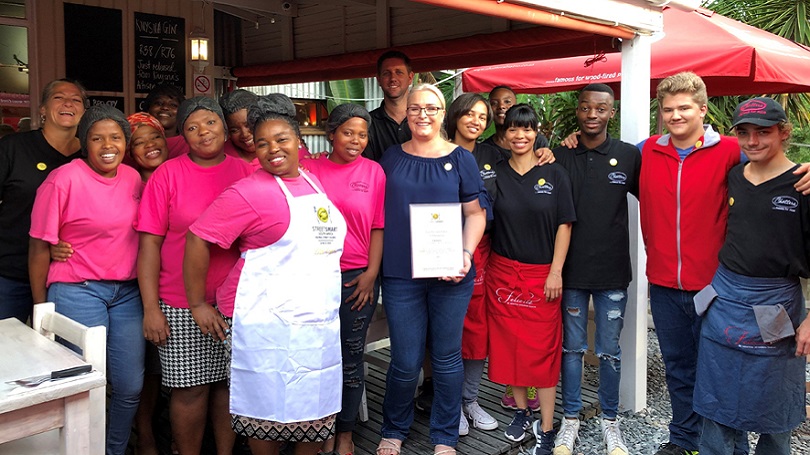 Four Southern Cape restaurants have been ranked amongst the country’s Top 20 establishments making a difference to the lives of vulnerable children R5 at a time as partners of StreetSmart SA.

High five goes to Chatters Bistro of Knysna for cracking the national Top Five list, followed by the other top achievers, Belvidere Manor, also of Knysna, and The Fat Fish and Nguni Restaurant, both of Plettenberg Bay.

“We at Chatters are so very proud to find ourselves once again, in the top 5 fundraisers for STREETSMART nationwide. It just goes to show what a difference a R5 donation per table can make, even in a small town such as Knysna. Thanks must, of course, go to all our diners who have supported this initiative, especially those regulars who visit us more than once a week and insist the donation should be added to the bill each time. Thanks must also go to our staff, particularly the front of house team, who are all 100% behind StreetSmart and are always happy to answer any questions. Let’s hope we can do even better next year,” says Clare Dixon, owner of Chatters Bistro, Knysna.

In addition to the 101 restaurants throughout South Africa where patrons can make a voluntary R5 donation added to their bill, guests at an increasing number of wine tasting rooms, B&B’s, guest houses and hotels are now able to make a contribution.

All funds raised support organisations working with street children within the area where the establishments are located putting the money donated to work where it is needed most in the local community.

StreetSmart SA is a conduit fundraising organisation that partners with restaurants, accommodation establishments and wine tasting rooms, to receive donations from diners and guests to support their own locally based beneficiary organisations. In this way, locally run programmes that prevent the vulnerable from becoming street children, and help those already on the streets through reintegration back into schools or families, can be funded.

Every cent of the donations received by StreetSmart establishments goes to organisations that support vulnerable children through education, skills training and family reunification, in order to give them a chance to normalise their lives and to be re-integrated into society.

“Congratulations to the four Southern Cape restaurants for donating their way into the national Top 20 StreetSmart partners! We can all do our bit. Your StreetSmart contributions of R5 literally changes lives because it enables us to support programmes that work towards normalising the lives of vulnerable children and children living on the streets. So, please join our StreetSmart partner network and give responsibly,” says Melanie Burke, StreetSmart Chairman.

StreetSmart SA invites more restaurants, accommodation establishments and wine tasting centres to participate and more diners and guests to choose to go to StreetSmart establishments – in this way more children’s lives can be changed.

StreetSmart SA was set up in 2005 by a group of concerned Capetonians under the patronage of Archbishop Emeritus Desmond Tutu and comprises resourceful board members representing business and the hospitality and tourism industries.

StreetSmart SA is registered as a Public Benefit Organisation as well as a Non-Profit Organisation and ensures that every cent donated by diners, guests and patrons goes towards social and educational upliftment projects for street children. StreetSmart’s goal is to be part of the process of social normalisation and to encourage the public not to give money into the hands of a child as this keeps them on the streets. In essence, frequenting and donating at a StreetSmart establishment is the responsible way to help a street child.