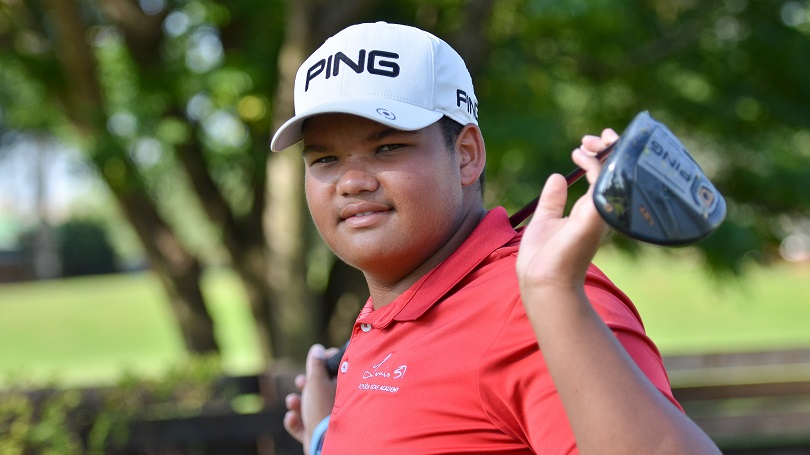 Both youngsters produced some fabulous shot-making to come up trumps in the three- to four-club wind in the quarter-final and semi-final sessions today. With more of the same on the menu for the final, this showdown could be one for the books.

Nienaber’s journey to the final featured some prized scalps.

The country’s number one ranked amateur set a winning course when he dispatched reigning Junior Open champion Martin Vorster 5 & 3. Next, he routed former South of Ireland champion James Sugrue 4 & 2 to set date for a spot in the top eight with local favourite Luca Filippi.

The Milnerton golfer was targeting the elusive double after winning the 36-hole qualifier, but Nienaber reeled in a trio of birdies on the back nine to take the match 2 & 1.

Nienaber three-putted the second, but recovered with birdie at the third to square the match and he put the Ernie Els and Fancourt Foundation member under pressure with arun of four birdies from the fifth to go 4-up.

“I made a great up-and-down from the greenside bunker at five,” said Nienaber. “At six, I came up short of the green, but I chipped it close and boxed the birdie putt.

“I made a six-footer for birdie at seven and wedged it to six foot at eight. Then Deon started his assault with birdies at nine and 12. We halved 14 in birdies and he made another great birdie at 16 to go 1-down. The flag was at the back and the wind was pumping from the left. I hit my tee shot 15 metres left of the pin and he pitches his three metres behind the flag and made putt.”
The pair halved 17 birdies and Nienaber sealed a 2 & 1 win with par at the closing hole.

Nienaber said that winning the SA Amateur title eclipse his victory in the 36-hole Amateur Championship qualifier and his runner-up finish in the Brabazon Trophy.

“Those were two very special achievements, but putting my name on the SA Amateur trophy has been a dream throughout my amateur career,” said the Quintin Williams Golf Academy student.

“I was very disappointed to make an early exit last year, so I’ve made this year’s SA Amateur a serious goal in 2019. My dad (Waldo) came with me and he has been by my side from the get-go and to go into the final with my dad is really special. I made fast starts in all my matches except in the semi against Deon, and that will be the main strategy for tomorrow’s final round.”

Unheralded Duminy has been a force on the junior circuit for some years now and the Louis Oosthuizen Junior Golf Academy member has been equally impressive in Cape Town as he plotted a course to the final.

The 16-year-old mowed down Englishman Mark Hyde 6 & 4 to open his campaign, and took out Scotsman Kieran Cantley with a 17-foot birdie at the 19th hole to make the top 16.

He defeated Pretoria golfer Stals Swart 2 & 1 to make the quarter-finals, where he sent Irishman Ronan Mullarney packing with a 3 & 2 result. The Pinnacle Point golfer went up against Caolan Rafferty from Ireland in a semi-final that also went the distance.

The pair matched each other with a bogey and two birdies apiece to stay all square until Rafferty birdied the par five 14th. Duminy struck back with a birdie at the next hole and the status remained all square until the 18th hole, where Rafferty overshot the green with his approach,

“I missed a few birdie chances in the match, but I played solid golf tee to green and it was a tight battle,” said Duminy after his 2 & 1 triumph.

“Since the start of the week, I have focussed on playing the course and to forget who I am playing, but I am looking forward to playing Wilco in the final. It’s a huge opportunity for me to test myself against one of the top golfers in the world. My strategy has been to hit fairways and greens and to try to make a few quick birdies, and I’ll stick to my game plan for the final. My dad (Hilton) is coming through from Mossel Bay to caddie for me and I think that will keep me calm and focused, too.”