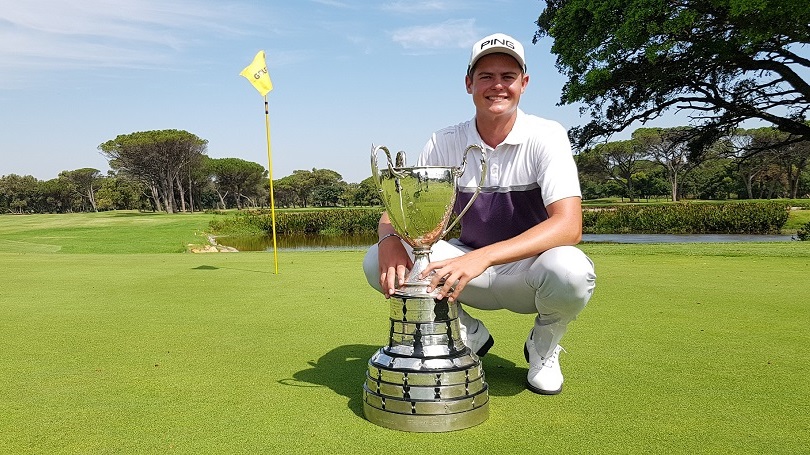 In a gripping final round then went the distance at King David Mowbray Golf Club, the world number 59 was ruthlessly tested by 16-year-old Jordan Duminy in the 36-hole final.

The 2018 Amateur Championship qualifier winner was undoubtedly the favourite going into the final day, but unheralded Duminy showed maturity beyond his years to knock out two top Irish golfers to reach the final and he never backed off in the last clash.

On the back foot for most of the final, an uncharacteristic fist-pump after he holed a par-putt at the 36th hole to beat Duminy 1-up, signalled Nienaber’s joy and relief at achieving a lifelong dream.

“It is such an honour for me to lift this trophy,” he said.

“At the start of the week I said that I rated this championship higher than the runner-up finish in the Brabazon Trophy or winning the qualifier at the Amateur Championship last year. It’s been a dream for many years and I am overjoyed that I finally achieved it.”

There was little to separate the two players after their first tee shots.

Duminy gave Nienaber a three-foot putt at the first, but got his first inkling of playing in the really big leagues after he lagged his first putt form the front of the green to three feet and had to putt to halve the hole in birdies.

At the next hole, Duminy leaked his tee shot left and Nienaber went up for the first – and only – when the Mossel Bay youngster paid the price with a bogey.

Nienaber dropped a shot at four, but recovered with a birdie at five to stay 1-up, but Duminy levelled the game with a gain of his own at the par five sixth. He went 1-up at seven when the Free State golfer surrendered another shot.

“I definitely didn’t bring my A-game to the final and it was a see-saw battle between us, with him going up and me trying to square. Jordan was unbelievable solid. He drove it well and his short-game was outstanding. He holed putts from everywhere and he made very few mistakes.”

“I hit a good shot into 16 and boxed the birdie putt, and at 17, I made another birdie putt after Jordan overshot the green. We halved the 18th in pars to start the last 18 holes all square. I was streaky with the putter and hit some errant tee shots. He was really solid, though. Credit to the little guy; he was in the match and it would take some hard work to beat him.”

Duminy birdied the first and the fourth to move 2-up through 24 holes.

The Louis Oosthuizen Junior Golf Academy member kept the lead until Nienaber clawed a shot back with a birdie at 25th, but was still 1-up through the turn after Nienaber cancelled a bogey at the short eighth (26th) with a birdie at the 27th hole.

Duminy had a birdie chance from 10 foot, but his putt missed the mark.

“It may have looked as if I didn’t break a sweat, but my heart was racing a few times, especially when I gave a hole away coming down the home stretch,” Nienaber said after he closed out the victory with a par at the last.

“I hit it into the trees left and Jordan was in the trees right. We both had tough shots to the green with the flag on the left near the water. I managed to work it on the green. Jordan was in the really thick stuff and he caught a flier that went straight and finished under a cart. He had to chip in and he missed his par putt. I gave that last putt everything I had.

“Jordan never gave an inch. He never gave me a chance to pounce, but my own game didn’t allow for it to happen either. I really had to work for this one. I’m absolutely ecstatic.”

In addition to the amateur world golf ranking points he earn with this victory, Nienaber will get another stab at the Freddie Tait Trophy with a start in the South African Open Championship later this year.

But first, he has the South African Stroke Play Championship at De Zalze Golf Club next week on his mind. “I came so close last year, going five-under in the final round, but I just couldn’t catch Oliver Gilberg. I ended up finishing third, so I will enjoy this for a bit and switch my focus to the SA Stroke Play. More than anything, I would love to win the double.”