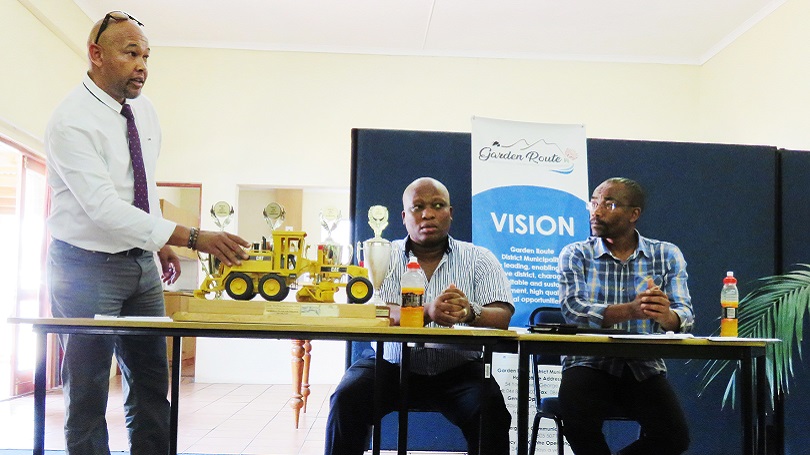 Certificates and trophies were handed out to those individuals and teams who excelled in their work 2018/19 financial year.  The event is steered by Executive Manager, Roads Services: Mr John G Daniels and by his side on the day to deliver messages of support were GDRM Executive Mayor, Cllr Memory Booysen and Municipal Manager, Mr Monde Stratu.

Mr Stratu commended everyone, saying that they are “willing to leave families and loved ones behind to do the work,” making this district “amongst the best in the country in terms of roads maintenance and construction.” Mr Stratu added that the Department has “excelled consistently over time,” which demonstrates the level of “commitment of each staff member.” He concluded that this generation should do anything in its power to ensure that the next generation inherits a better country than their predecessors.

In his address, Cllr Booysen said that Council is in serious discussion about the future of the Roads Department and that these discussions are seen in a positive light.  He added that the recent developments with Ekusasa Mining provides the opportunity for possible collaborations with GDRM Roads to see if the current formula they use for gravel roads in the northern parts of South Africa and other African countries can be adapted to use on gravel roads in this district.

Mr Daniels echoed the gratitude expressed by Mr Stratu and Cllr Booysen, adding that maintaining approximately 6 200km of roads is no easy task. “People mostly only see trucks and graders coming and going, but very few understand the amount of work being done, sometimes in harsh conditions. Workers are continuously exposed to the elements of nature, but through perseverance and passion are able to deliver quality work that makes us amongst the best in the country.”