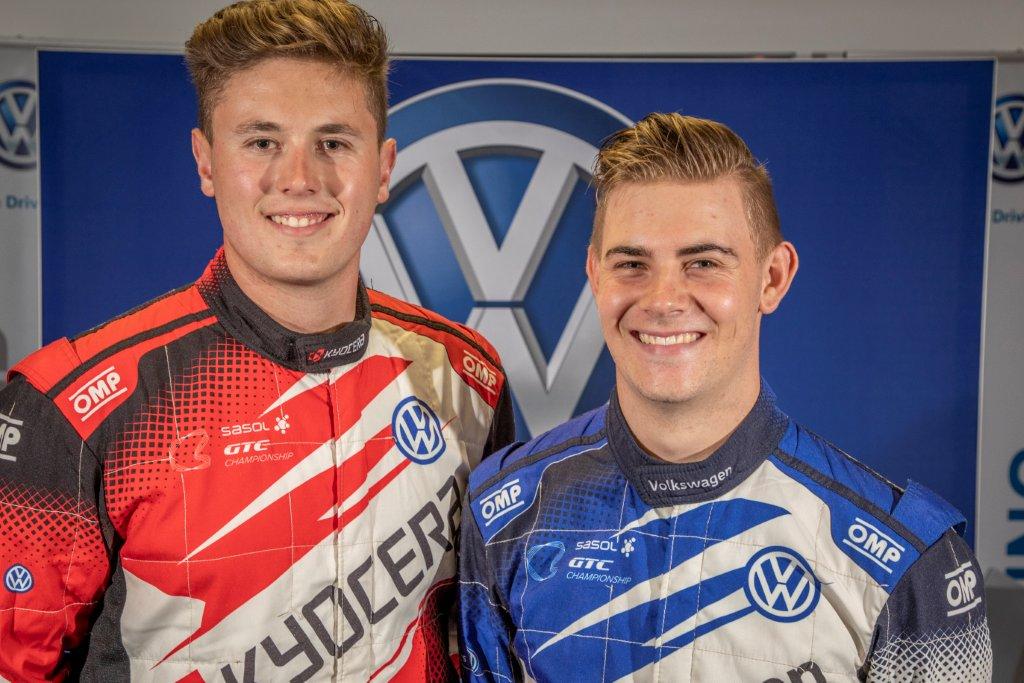 Brian Joss – After an encouraging 2018 season which included a number of victories in the country’s premier circuit racing series, Volkswagen Motorsport is eager to take on the 2019 season and they have their sights set on winning more than just a few races.

Besides having championship aspirations for the two GTC drivers, Volkswagen also hopes to continue their domination of the GTC2 category.

After completely dominating the GTC2 category over the past two years, 19-year old Keagan Masters will now make the step into the GTC class where he will join teammate Daniel Rowe behind the wheel of one of the GTC Jettas.

“Keagan is a real talent,” commented Mike Rowe, head of Volkswagen Motorsport. “He served Volkswagen extremely well by winning the past two titles in the GTC2 category and although he is still young, we felt it was time to swop his Golf GTi for the GTC Jetta.”

Masters is up to the challenge but at the same time also very realistic about taking the big step. “The Jetta is completely different to the Golf that I am so used to,” said Masters. “It is a lot bigger, it is a lot faster and it has massive downforce thanks to all the wings and other aerodynamic aids, but most importantly, it is rear-wheel drive so it will take some getting used to. And the competition is tough because this is where all the big boys are, but at the same time I am training hard and preparing myself mentally and I hope to be competing near the front of the field as soon as possible.”

The young man from Hartbeespoort joins Daniel Rowe who will enter his third season at the pinnacle of the sport. Rowe had a great 2018 season which included victory on three separate occasions but the 25-year old is aiming much higher in 2019. “We made massive strides during 2018 and I learnt a lot,” commented Rowe. “This year we want more. We have a few plans and strategies and the team has worked very hard to make the car as fast as possible. I really believe that with this Jetta and the team that we have, that we can fight for more than just race victories. It would be fantastic to reward Volkswagen with the title at the end of the year.”

The two race cars have been completely rebuilt during the off season at their Midrand home by Graeme Nathan and his team and are ready to be transported to Port Shepstone where they will compete on the tarmac of the Dezzi Raceway for the very first time. “Graeme and his team are now more familiar with the car than ever before. They have turned out two immaculate Jettas and the lessons learnt from last season will come in handy as we take on the championship and the competition in 2019,” added Mike Rowe.

Besides gunning for glory in the GTC category, Volkswagen Motorsport has every intention to continue their domination of the GTC2 category. The Golf GTi has won the majority of races over the past two seasons and even though champion Keagan Masters has moved on, Volkswagen is confident that the GTi will remain the car to beat. Adrian Wood returns for his second season behind the wheel of the Kyocera-backed GTi while former multiple karting champion Bradley Liebenberg joins the Volkswagen family in another Golf GTi that will sport Volkswagen Driving Academy livery. “Adrian was very competitive, especially towards the end of last season and if he can continue with that form he will undoubtedly be a front runner once again. In the same breath we are very excited to have Bradley join our family. He is known for his speed and talent and hopefully him and the GTi will find each other soon which will make them a tough combination to beat,” said Rowe.

Volkswagen Motorsport is indeed confident about its driver line-up, but the team has another ace up its sleeve in the form of multiple South African racing champion Michael Stephen who will play an integral role in the team’s daily running and racing strategies. “I am extremely pleased to be a part of this family and I really hope that my knowledge and experience will help the team to achieve new heights,” said the multiple champion.

The Dezzi Raceway and its 2.5 kilometre layout will be new to most of the GTC field which means that racing Saturday March 2 could be very close. “We expect nothing less, but we are ready for the challenge and we are going for gold,” concluded Rowe.