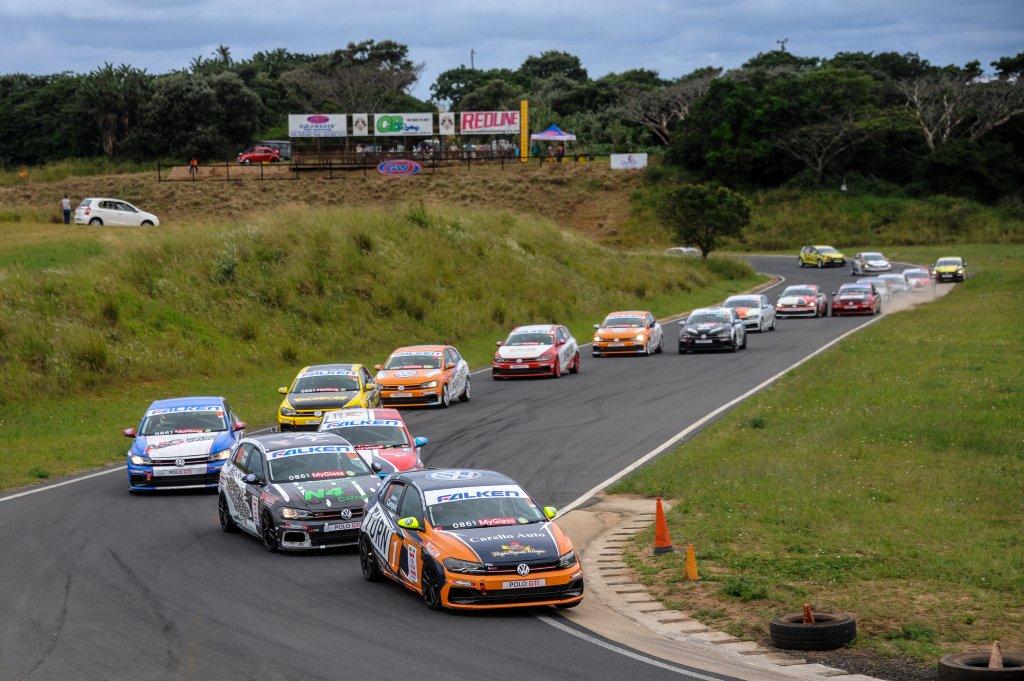 Brian Joss – The Falken Polo Cup undoubtedly lived up to its reputation as the country’s most exciting racing formula when the 2019 season started with two action-packed races at the scenic Dezzi Raceway near Port Shepstone on the South Coast of Kwa-Zulu Natal.

When the dust settled, the two race victories were shared between current champion Jeffrey Kruger and former champion Chris Shorter, with the latter walking away as the overall winner once the times were added up.

The Dezzi Raceway certainly provided a beautiful backdrop to Falken Polo Cup racing, but the 25 young hopefulls didn’t have any time to admire the scenery when it was time to qualify for their respective grid positions. A hot and humid South Coast turned into a very wet one when the heavens opened up the moment the qualifying session started. All 25 Volkswagen Polos are now on slick tyres from series sponsor Falken, and although they perform great in dry conditions the organisers declared the session a wet race which allowed the teams to change to wet weather tyres. What followed was a frantic few minutes in pitlane as crews raced to get their cars out on track in time. It was a slippery affair to say the least as all 25 drivers battled to stay on track while also trying to top the timesheets. The fastest 6 drivers at the end of regular qualifying each gets one more chance in the form of one single flying lap to try and influence the order of the starting grid. As expected, times were close but when the flag was waved, it was youngster Bradley Liebenberg who pipped defending champion Jeffrey Kruger to pole, followed by Jason Campos and the first of the Shorter brothers Chris.

So that’s how things stacked up after qualifying. What followed was two extremely close races that had the passionate Dezzi Raceway crowd quite literally on their feet for the combined 20 laps of action. Bradley Liebenberg, who returned to this form of racing for the first time since

2016 started the race from pole position, but he had trouble negotiating the first corner and lost a number of positions in the process. This opened the door for Jeffrey Kruger and that was all the defending champion needed. With a clear track ahead of him, Kruger put in a series of consistent laps to build a comfortable lead of more than six seconds. Behind the leading car a series of tough battles was fought for almost every position. Jurie Swart and Keegan Campos collided in a first corner incident that nearly saw the Polo of Swart roll over, while a spirited drive saw young Liebenberg fight his way back through the field after his first corner incident. In the end, it was Kruger who started his title defence in the perfect manner by claiming the victory, more than six seconds ahead of Jason Campos. Chris Shorter’s return to the series saw him cross the finish in a fine third, just three tenths of a second ahead of Stiaan Kriel. Liebenberg recovered to finish fifth, ahead of Volkswagen Motorsport’s Jonathan Mogotsi who recorded a sixth place finish.

In Falken Polo Cup, the top 6 qualifiers draw their starting positions for the final race of the day which usually causes some havoc but also excitement. This quite literally put the cat amongst the pigeons as once again the field were all jockeying for positions during the first few corners of the race. It led to some paint being swopped and a few moments that had members of the growd grasp for air, but 10 eventful laps later it was former champion Chris Shorter who saw the checkered flag first. He crossed the line ahead Bradley Liebenberg, Jeffrey Kruger, Keegan Campos and Stiaan Kriel.

Times from both races are added to reveal the overall winners for the day.

When the calculations were completed, it was Chris Shorter who came away with the overall victory ahead of Jeffrey Kruger. It was a very popular victory for the young man who together with his brother Matt missed the 2018 season due to personal reasons. His return to the sport could not have been any better and it sets up an exciting fight with current champion Kruger for the rest of the season. Liebenberg was third overall, just beating newcomer Stiaan Kriel to the podium. Jason Campos got fifth, a mere six tenths of a second ahead of Volkswagen Motorsport’s Jonathan Mogotsi.

“It was an incredible weekend of racing,” commented Mike Rowe, head of Volkswagen Motorsport. “The series once again proved how popular it is with competitors and spectators alike and it also serves as proof of the level of talent we have in this country. It was also the first time that the new GTi’s raced on the Dezzi circuit and together with the Falken slick racing tyres, the cars went faster around the 2.5 kilometers than ever before. If this opening weekend was anything to go by, we are all in for a very exciting and intense season,” Rowe concluded.

The next round of the Falken Polo Cup will take place on 5 and 6 April at the Zwartkops Raceway to the west of Pretoria.