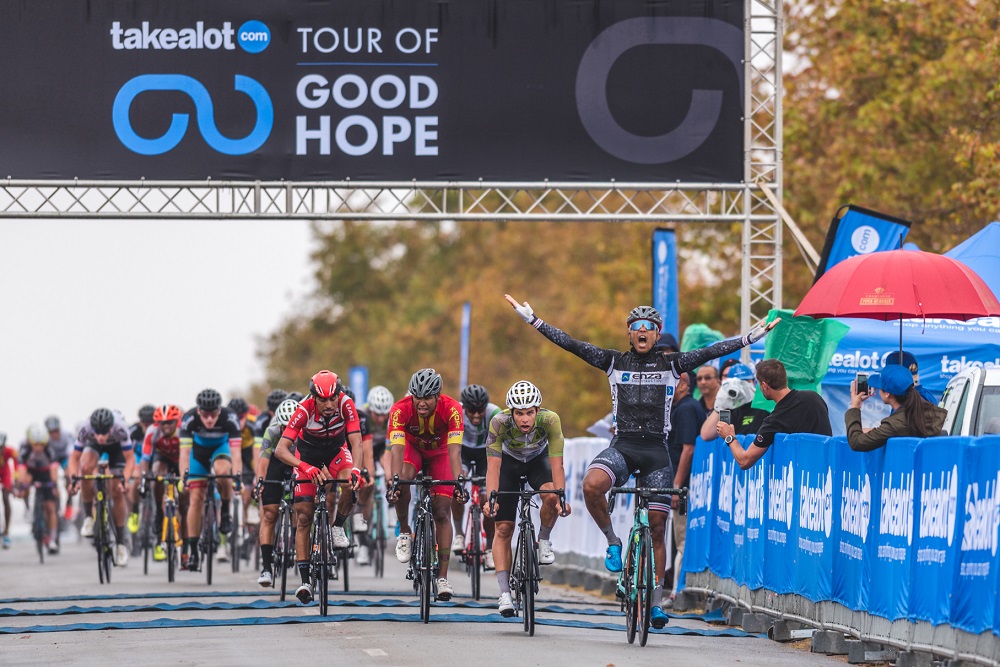 Nolan Hoffman shrugged off a few anxious moments early on today to time his sprint to perfection, capturing the opening stage of the Takealot Tour of Good Hope cycle race for the second year in a row.

South Africa’s premier road tour got under way in inclement weather near Paarl in the Cape Winelands, but it did not stop the elite category going out with guns blazing on the short 58.5km first stage.

The event has UCI 2.2 status for the first time this year, allowing riders to earn international ranking points. It has resulted in teams from France, the United Arab Emirates and Brunei contesting the race.

Riding for Team Enza after securing a sponsorship with Enza Construction, Hoffman edged his rivals in the final dash for the line, finishing in 1:18:18.

He was followed by Ryan Harris (TEG Procycling) and Graeme Ockhuis (All4Security). All three podium finishers were credited with the same time.

Hoffman, who grew up in the region but now lives on the West Rand in Gauteng, said they knew the pace “would be hot from the start”.

He praised his team for their work in closing the gap on Cycle Power’s Orion Craig, who broke away about halfway through the stage, and said they could not have asked for a better result for their new sponsor.

“With about 3km to go, Gustav Basson from TEG Procycling attacked and my teammate Steven van Heerden had to chase really hard to bring him back,” said Hoffman, who will defend his Cape Town Cycle Tour title on Sunday.

“We caught him just before the last kilometre and it was a bit of a mess as all the teams were trying to bring their sprinters through to the front.

“I then got on the wheel of a TEG rider and was able to time it perfectly in the end.

“It was not easy because it drags up a bit in the last kilometre and then there is a slight downhill in the 200m towards the finish.

“I knew I had to get the sprint going just before the crest and I managed to get the perfect jump on Ryan. From there I knew I could do enough to take it.”

Earlier, Hoffman said they had taken the breakaway by Craig seriously, describing him as a dangerous competitor.

“We know that he is a strong guy and we couldn’t let him get too far up the road.

“Our boys took the responsibility of closing the gap, but it was not easy because the rain spiced things up a bit and the wind was swirling a lot and changing direction.

“It was well within the last 10km that we managed to close him down and ultimately I must pay tribute to my teammates for the stage win.”

He added that securing a sponsor had motivated the team to produce something special.

“It’s incredible to start like this and shows that we have done the hard work. To deliver [a stage win] for the boys when they take the responsibility is an awesome feeling.

“And it could not have been better payback for Enza Construction and the faith they have shown in us.”

In the women’s race, defending champion Ariane Luthi sent out a signal to her rivals by winning the opening stage in 1:40:06, ahead of Liezel Jordaan and Catherine Colyn.

The Swiss pro, a former Cape Epic champion, won four out of the five stages on the way to her overall victory a year ago and will be looking to consolidate her yellow jersey position in tomorrow’s second stage of 114km.