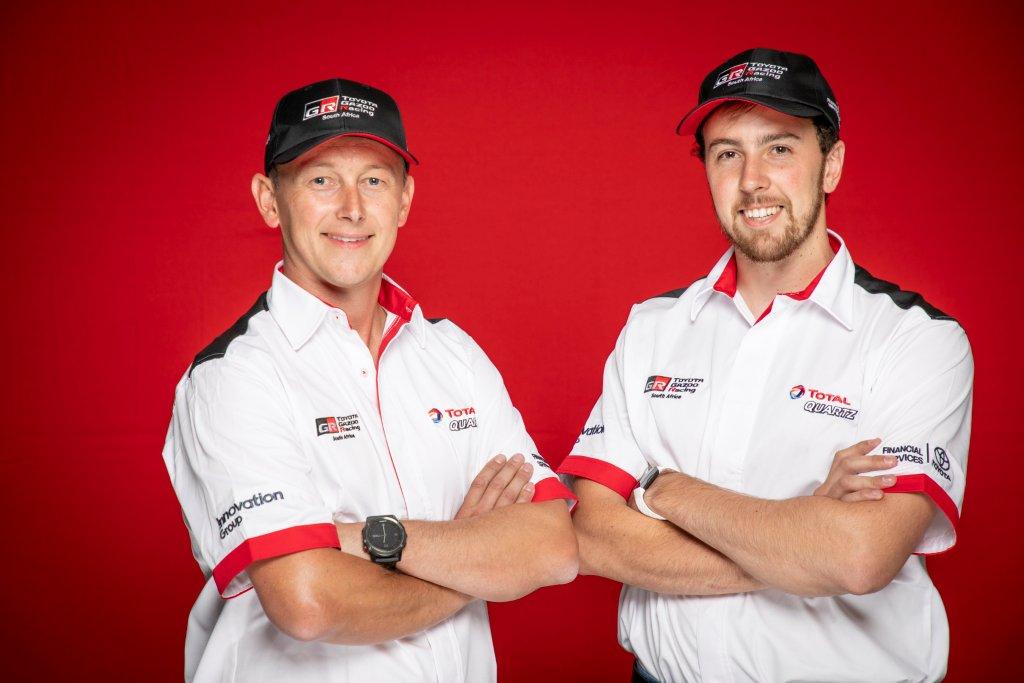 Brian Joss – The year could hardly have started better for Toyota Gazoo Racing South Africa, with a win on the world’s toughest motorsport event, the Dakar Rally.

The locally-built Toyota Hilux that achieved this historic victory in the hands of Qatar’s Nasser Al Attiyah and French navigator, Mathieu Baumel, was largely developed during the South African Cross-Country Series (SACCS), where it will continue to compete during 2019.

Last year saw Dakar veteran Giniel de Villiers and navigator Dennis Murphy triumph as overall champions of the SACCS; with teammates Henk Lategan and navigator Barry White taking the honours in Class FIA. Both drivers will be back in action for 2019, though Lategan will have a new navigator beside him when he lines up for the start of the season at the Mpumalanga 400, on March 15th, 2019.

Brett Cummings will strap into the navigator’s seat beside Lategan this year, and the East London-born motorcycle ace is looking forward to the experience.

“It is extremely exciting, and fits in with my own aspirations to return to Dakar on four wheels, rather than two,” says Cummings of his new role. “I’ve been fortunate to race bikes all over the world, and finished the Dakar Rally twice. I’ve also navigated in the cross-country series before, and even though my experience is limited, I’m certain that I can bring a lot to the team.”

Cummings started racing 1999, at the age of 16. It wasn’t all plain sailing, as he suffered a fractured ankle after another competitor rode into him, but things improved markedly from there. After racing locally, Cummings started competing on the global stage, with his first international event being the Australasian Safari in 2012. He finished 4th overall and won the Dakar Challenge.

This set him up perfectly for his first assault on the Dakar Rally in 2013, though he also took part in the Merzouga Rally in Morocco, in order to learn the Dakar navigation system before the race. In 2014 he became the first South African to enter and finish the fearsome Malle Moto category for unsupported bikers, finishing second in class.

More international races followed, as well as a stint in a cross-country Toyota Hilux beside Thomas Rundle; and a shift in focus to fitness came next. Now it is time for the next chapter in Cummings’ racing career, and the hot seat in a Dakar-winning Toyota Gazoo Racing SA Hilux fits the bill perfectly.

“We are excited about Brett joining the team,” says Toyota Gazoo Racing SA Team Principal, Glyn Hall, of the new signing. “Brett brings a different perspective to the team, having competed in so many races all over the world. He is also young and fit, and we believe his energy will be welcomed in the squad.”

Another man with youth on his side is Henk Lategan, who proved his pace during the 2018 SACCS. The youngster had a torrid start to the season, but quickly found his groove and won the Atlas Copco 400 in Bronkhorstspruit overall.

“We always knew that Henk was quick, but he needed time to settle in with the team, and get used to the Toyota Hilux,” says Hall of Lategan’s performance. “By the middle of the year he was keeping Giniel honest in every race, and we’re expecting more good things from Henk this year.”

But, as PJ O’Rourke famously put it: Age and guile beat youth, innocence and a bad haircut – and the veterans in the team, Giniel de Villiers and Dennis Murphy, will be looking to build on their success from 2018.

“I started the year with Rob Howie in the car,” says De Villiers, “but an injury in Qatar saw Murphy take over as co-driver, and we’ve really had a lot of fun together. Winning the championship really crowned a vintage year for Toyota Gazoo Racing SA.”

The team will be fielding two Class FIA Toyota Hilux race cars – the same version of the car that won the Dakar Rally in January, 2019. “We will, of course, be working on refining our Hilux with an eye on Dakar 2020,” says Hall. “There’s still more development to be done, and we know the competition won’t be sitting on their hands during the year either.”

The Toyota Gazoo Racing SA squad will also be supported by brothers Johan and Werner Horn, who campaign the Malalane Toyota Hilux as part of the TGRSA squad in Class T of the championship. ‘Gifpyl’, as their steed is affectionately known, has proved to be quite lethal at times, and work during the off-season will see the team ready to take on their arch enemies in the form of Lance Woolridge and Ward Huxtable, in the Ford Ranger.

The Malalane lads were Class T champions in 2017, but lost their crown to the men in blue after a hard-fought battle in 2018. They are hoping to set things right again in 2019, and will be full of energy when they line up for the start in Dullstroom. Even though they hail from Malalane, the Mpumalanga 400, Round 1 of the season, is proudly supported by Malalane Toyota – and as such it is a home-away-from-home race for the Horns.

“We know our car is good, and we are ready to go racing,” says the effervescent Werner Horn of the season ahead. “Now we’re just counting the sleeps until we can fire up Gifpyl and get the season going.”

Now, in the front-wheel-drive era, the Class R2N Toyota Gazoo Racing SA Etios has proven a formidable machine, and in the hands of Botterill and Vacy-Lyle, has become the car to beat for at least the last three years.

“We’ve been fortunate to win so many championships on the trot,” says Botterill. “But the car remains good, and the championship is alive and well. And we’re more than ready to face the new season.”

It won’t all be plain sailing, however, as the pair will undeniably start the year with a big target on their backs. With that said, their 2018 season didn’t start too well, with a DNF on their home event. But then the pair found their mojo and pretty much set the pace for the rest of the season.

An exciting new member of the Toyota Gazoo Racing SA squad is GTC racer Michael van Rooyen, who will campaign an all-new Toyota Corolla in the GTC series, starting with an away-race at Dezzi Raceway on March 2.

Van Rooyen is something of an anomaly in the team: The only driver without a navigator; and the only car that races on slicks. Toyota last fielded an official entry on tarmac back in 2002, when Charl Wilken and Mark Cronje raced the Toyota Corolla RXI in Class B of the SA Production Car Championship. Wilken won the championship that year, and as such Van Rooyen has big boots to fill.

“We’ve just got to get on and do the job,” says the 38-year-old father of two. “We’re excited about the new car, as well as the changes to GTC in general. All I want to do is go out there and win races.”

Van Rooyen has been around motorsport for the last 18 years, having cut his teeth in karts, before stepping up to Polo Cup in 2005. A stint in Production Cars followed, before Van Rooyen joined the exciting world of GTC in 2016.

“Toyota SA Motors has always supported South African motorsport, and we believe that motorsport is part not only of our marketing strategy, but also our DNA,” says Toyota SA Motors Vice-President: Marketing, Glenn Crompton. “We are very proud of what we achieved on the Dakar Rally this year, but now it is time to focus on the local series, and we have every reason to be excited about the year ahead.”