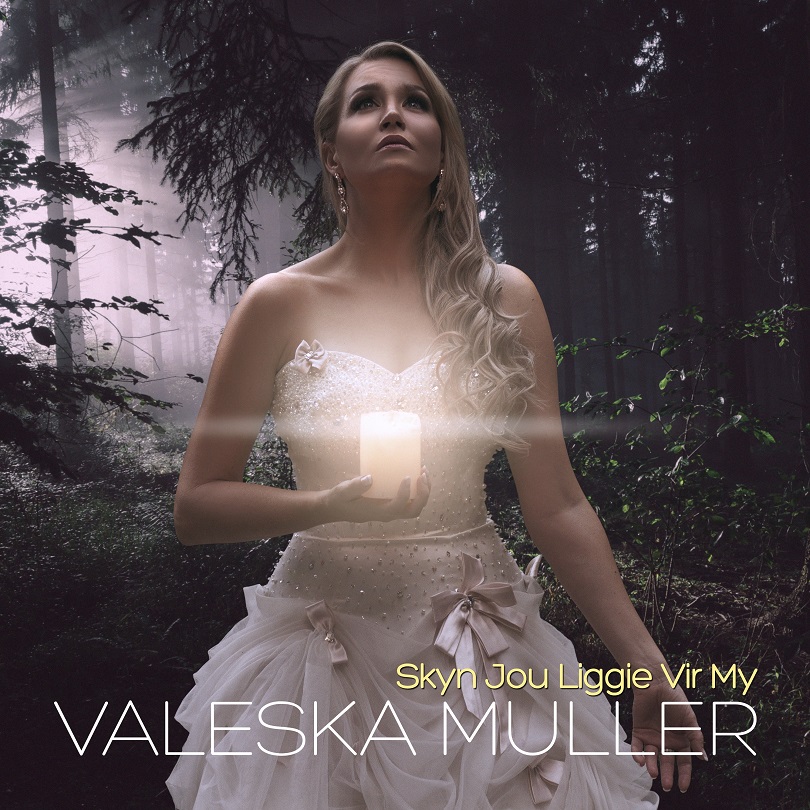 “While I am busy making myself a cup of Five Roses tea, with milk and sugar, the lights go off. We are experiencing load shedding once again.

In the dark, I realize that I only have 20% cell phone battery power left. After a long day of studio recording and vocal training, I finally get time to sit and answer questions about my second single, SKYN JOU LIGGIE VIR MY. Quite ironically so, because I’m sitting in the dark and typing my answers by candlelight,” Valeska Muller shares from behind the scenes of her brand new hit that has just been released.

Although the theme is very relevant in South Africa, where power outages are at the order of the day, the significance behind this electro pop song is much more personal. “I experienced very dark moments in my life. I can’t explain everything in detail, but I can briefly describe it as my present overcoming my past. If I can be okay and can stay positive after everything I’ve survived, anyone can do it if they just believe in themselves. That way, we are no longer victims of our circumstances,” she explains. “You choose who and what you want to be. I want to inspire people to accept their past and get to the source of their unhappiness. That’s the only way you can truly become free.”

Just like a bright light flickering in the dark, SKYN JOU LIGGIE VIR MY, boasts a delightful and upbeat tune the singer is very proud of the song that she and producer BIGG-T created together. “The song reminds me that I can make a difference by letting my light shine for others. Everyone has a darkness in their past. By confronting it, you dispel the darkness and become free from the hurt. Never give up, remember the darker your situation, the brighter your light will shine,” says the musician.

According to Valeska, who is currently working on her debut album, they are already planning a music video for the single. Although she cannot say too much about it at this stage, she reveals: “It is going to be about self-love. It is important to have both light and darkness in your life. One cannot exist without the other. You cannot fight who you and where you came from, so you have to learn to accept your past.”

SKYN JOU LIGGIE VIR MY, the second single off her coming album, follows in the footstep of her previous Afrikaans single, Verdwaal Saam Met Jou, which was very well received. It is a modern pop song about making time to escape from the hustle and bustle of city life to spend time with the love of your life. The music video of this hit will also be released shortly.

Valeska has been working in the music for the past nineteen years and credits being part of the Top 7 contestants on the reality program, Zing, as one of the biggest highlights of her career. A tragic accident during press night of the stage production, Sexy and the City, nearly destroyed her dream, but she never gave up. Since then she has had lead roles in various stage productions and made appearances in various television shows, including Generations, Roer Jou Voete, One Way and Binnelanders. One of her songs were also used as the theme song for the Via TV program, ’n Ster Vir My Bed.

Over the years, she has performed at different functions and at some of the country’s biggest festivals, including a performance for King Swandile at the Royal Swazi Sun, Aardklop, Innibos, The Mulberry Festival, KKNK and more. In 2017 she launched her first three singles, Not Again, Keep Up and Tell Me Why, on many music platforms including iTunes, Apple Music, Amazon, Deezer, Google Play, Spotify and YouTube. When she is not on stage, she manages her own music school, the Valeska Muller Vocal Academy (VMVA), where she coaches her students valuable lessons she learned from being in the entertainment industry.

According to the versatile vocalist, creating material for her album has been very therapeutic for her and taught her a lot about herself. She believes that her latest release will be welcomed with open arms, because audiences of all ages will be able to relate to the message. “When you let your light shine, you unknowingly also give others permission to the same. When we free ourselves of our fears, our presence do the same for others,” she concludes.

SKYN JOU LIGGIE VIR MY is not only proof of her amazing talent as singer and songwriter, but will also be a ray of hope for those who are going through a difficult time.

To celebrate her latest achievement, Valeska wants to create a platform for listeners to share their stories. If you have had a moment in your life where you were an inspiration to others, please share it on her page with the hashtag #SkynJouLiggieVirMy.