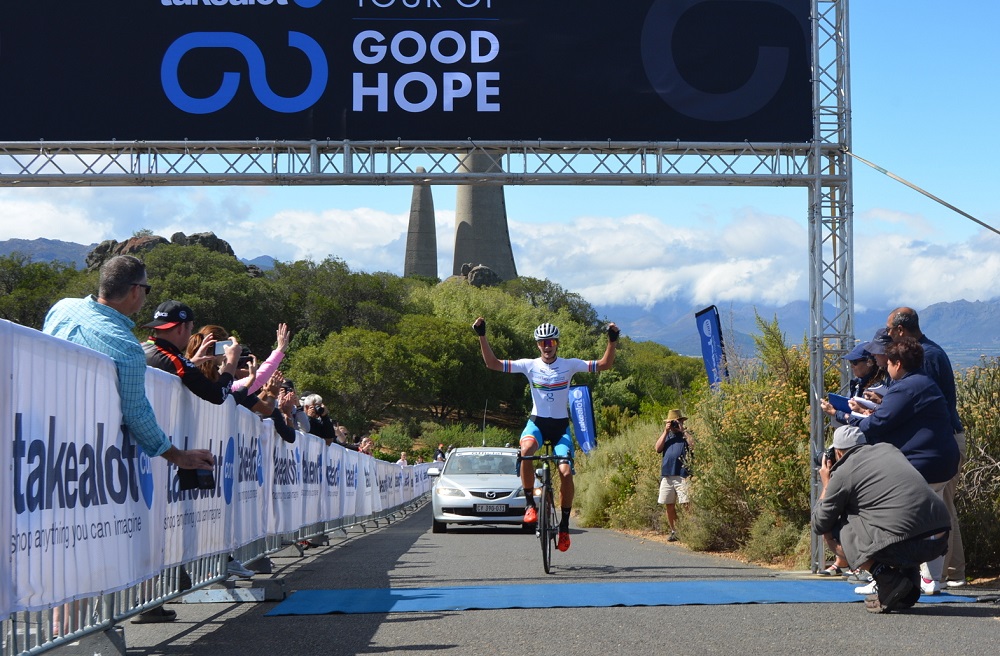 National U23 road champion Marc Pritzen triumphed in a battle of tactics to finish top of the overall podium on the last day of the Takealot Tour of Good Hope in the Cape Winelands today.

The country’s premier road cycle race, presented by the City of Drakenstein, ended in windy conditions as the riders tackled the final stage of 66.7km, finishing with its traditional climb up to the Taal Monument, just outside Paarl.

In a tense struggle to the finish, Pritzen, who won the race for the first time, used his climbing power to finally shake off Jason Oosthuizen (TEG Procycling) and grab the yellow jersey.

The OfficeGuru Racing rider completed the stage in 1:43:08 for an overall time of 9:57:15, 21 seconds ahead of the second-placed Oosthuizen. Frans Claes (Alfa Bodyworks/Giant), who was third on the stage, also finished third overall.

Overnight leader Dylan Girdlestone suffered a puncture on the final stage and finished in eighth place overall, about three minutes behind the winner.

Pritzen said they had planned the day differently, with his initial role being to secure the stage win and allow Girdlestone to retain his overall top position.

“The idea was to control the day because the finish suits me,” said Pritzen.

“So we wanted to keep the race together until the final climb, setting me up for the stage win, and Dylan wouldn’t lose any time on [his closest challenger] Kent [Main].

“But we woke up this morning to find the wind was howling and we knew this day was not going to be easy.”

When Munton sparked a breakaway about 15km into the stage, Pritzen was on his wheel and decided to go with him.

“There was quite a big group that got away and the gap went to 45 seconds,” he said.

“Then 10km later the gap went out to 2:45 and it was a bit risky so I decided I was done working and I sat on the back.

“That caused a lot of problems in the break because everyone was shouting and Jason [Oosthuizen, his main overall rival] didn’t want to roll through and was sitting on my wheel.”

He and Oosthuizen slowed down completely, but there were some attacks from the rest and eventually Pritzen said his team owner and manager Jamie Taylor advised him to work to close the gap.

“Byron was only about a minute behind me on the GC so then I rode across with about 4km to go and rolled through to the bottom of the climb.

“At that stage Byron made the pace nice and hard, but I accelerated and went through, with Jason on my wheel.

“I went again and when I peeked under my arm, he was still there, so I went once more and that was enough to snap the elastic for the win.”

Having set the Tour of Good Hope as one of his goals for the year – the first having been achieved at the national road champs – Pritzen was delighted with the outcome.

“It is very satisfying to win this tour for the first time and all the credit must go to the team, both riders and management, for the roles they played in making it possible,” he said.

“I cannot thank my teammates enough because we are a fairly young outfit and the way they controlled the stages, especially yesterday, was fantastic.

“And to have team management members such as Jamie and Keith Cruickshank providing the motivation and helping in so many ways made a massive difference.”

OfficeGuru will now turn their attention to the Cape Town Cycle Tour on Sunday, although Pritzen acknowledged they did not “have an out-and-out sprinter”.

“Nonetheless, we will have our strategy planned for the race and will go out there and see what happens on the day.”

In the women’s race, Catherine Colyn claimed the final stage honours in 2:20:42, but could not prevent first-time entrant Maja Wloszczowska of Poland from taking the overall honours.

Wloszczowska, who will be riding the Cape Epic later this month with Kross Fit Racing teammate Ariane Luthi, finished three seconds behind Colyn for an overall time of 12:42:37.

The Polish rider was delighted to win the title, describing the event as “five days of fantastic racing”.

“There was good competition, some great climbs and a tough time-trial, so I am very happy with the win,” said Wloszczowska.

“The best for me was winning the queen stage of 145km with some hard climbs and that shows my fitness is pretty good.

“I love racing in South Africa, although I haven’t been here since winning the first round of the [mountain-bike] World Cup in 2012. It is my first road race in the country and to win three of the five stages is very satisfying.

“I am sure the experience I have had here will pay off during the Cape Epic.”

CAPTION: Marc Pritzen crosses the finish line at the Taal Monument near Paarl to win the 66.7km fifth and final stage of the Takealot Tour of Good Hope road cycle race in the Cape Winelands today. The result gave him the overall title as well. Photo: Full Stop Communications