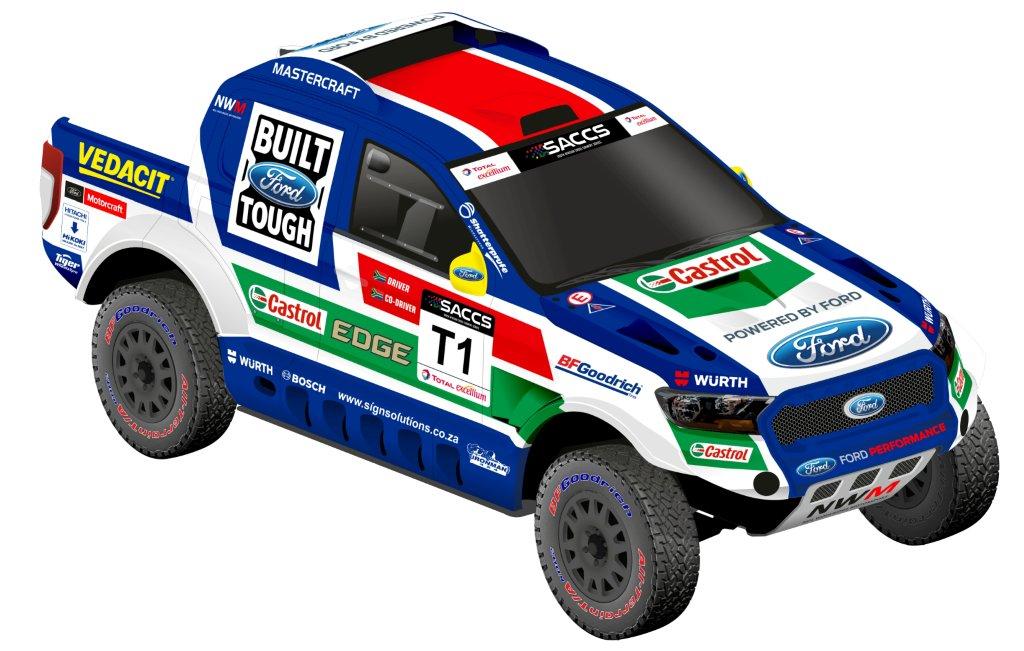 Brian Joss – The Ford Neil Woolridge Motorsport (NWM) team proved its mettle by taking the Class T championship honours last year in the highly competitive South African Cross Country Series (SACCS), and they are as determined as ever to retain the title – now with the backing of Castrol as a co-sponsor for 2019.

Reigning champions Lance Woolridge and Ward Huxtable were the class of the field in 2018 in the NWM Ford Ranger, winning three of the six SACCS races and leading the title chase throughout the season. The newly rebranded Ford Castrol Cross Country Team has one goal, and that’s to hang onto its prized Production Vehicle crown for a second consecutive year.

“Last year was fantastic for the team thanks to our unwavering focus on performing at the highest level, both in terms of the team’s physical fitness and vehicle preparation, which helped us finish first and third in Class T,” says NWM team principal, Neil Woolridge. “It will be no different this season as we set out to claim back-to-back titles.

“We are proud to continue our long association with Ford, as we enter our 19th cross country season together, and appreciate the company’s support and backing over the years,” Woolridge adds.

“For 2019, we’re delighted to welcome Castrol as a valuable co-sponsor and partner to the team,” Woolridge says. “Castrol has supplied us with top-quality oil and lubricants for many years, and has been one of the most famous and successful sponsors in South African motorsport for decades. It’s great to have them on board this year.”

The Ford Castrol squad will feature two NWM-built and run Ford Ranger V8 entries in Class T for the season, led by title holders Lance Woolridge and Ward Huxtable. The 2018 championship win was the first for Woolridge, who made his cross country racing debut in 2008 and is consistently one of the quickest drivers in the field.

Huxtable is now a three-time champion, having also won Class E co-driver’s titles in 2006 and 2010. His vast experience in the navigator’s seat will once again ensure that this dynamic pair will be the team to beat this year.

For the opening race in Dullstroom, the second Ranger will be crewed by Gareth Woolridge and Boyd Dreyer who finished a credible third last year.

The young and talented duo will power their way into the FIA-class of the SACCS around mid-year with a newly developed and built Ranger.

This exciting new entry will conform to the highest Class T1 specification, as campaigned internationally in the FIA World Cup for Cross Country Rallies, the famous Dakar Rally and the FIA class in the SACCS.

Some of the key differences compared to the South African-spec Class T Ranger include a fully independent rear suspension in place of the solid axle, mounting of the engine lower down and further back for optimised weight distribution, as well as upgraded brakes and tyres.

“The new FIA-class vehicle represents the next evolution of our successful Ranger programme, developed in conjunction with Ford Performance,” Neil Woolridge explains. “We’ve built a total of 22 cross country Rangers since we began this project in 2012, and there are 18 of our vehicles competing internationally.

“We’re very excited about our new FIA-class Ranger, which will incorporate a wide range of developments and performance upgrades based on the extensive knowledge and experience we have gained over the past five years with the current model.”

Marcos Baumgart and Kleber Cincea will return to the SACCS from the second race of the season, with the Brazilian cross country champions competing once again in the Class T Ranger.

South Africa’s premier cross country championship comprises six rounds, commencing with the Mpumalanga 400, staged in the scenic town of Dullstroom, from Friday 15 March. The event is based at Village Green Cricket Oval, and competitors will complete a short but intense 45km qualifying loop, starting at 13:30.

The main race gets underway at 08:30 on Saturday 16 March, and comprises two laps of a 180km route through the surrounding picturesque Mpumalanga landscape Fans and spectators can follow the action and track the position of the crews throughout the race using the RallySafe app which can be downloaded free of charge for iOS and Android devices.

After what is sure to be a thrilling season-opener, the SACCS moves on to the Berg 400 in Winterton, KwaZulu-Natal on 17 and 18 May, followed by the tough and challenging Toyota 1000 Botswana Desert Race that will be hosted in a new location, Selebi Phikwe, from 21 to 23 June.

Round four, the Atlas Copco 400, takes place in Bronkhorstpruit, on the eastern border of Gauteng, on 2 and 3 August, with the championship then moving on to the Harrismith 400 in the Free State.