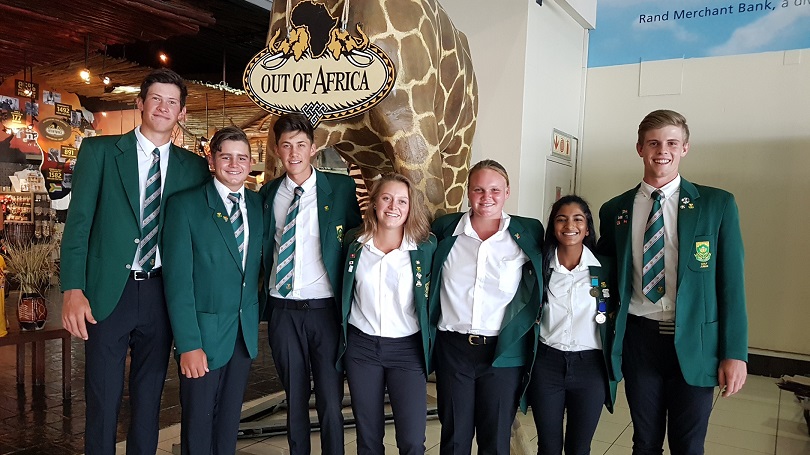 The top ranked GolfRSA Elite Squad trio travelled to Botswana on Sunday and will challenge the other African nations in the Girls Competition in a bid to secure a spot in the Toyota Junior Golf World Cup supported by JAL in Japan later this year.

GolfRSA National Squad members Martin Vorster, Christo Lamprecht and Casey Jarvis, as well as Sam Simpson also made the trip to Botswana, where the quartet will strive to chase down South Africa’s 21st consecutive victory in the event at Phakalane Golf Club from 12-15 March.

“The All-Africa Junior Golf Challenge long served as the Africa Qualifier for Japan for the boys, but the Girls Competition was only introduced two years ago,” explained Womens Golf South Africa President Sally Greasley.

“The chance to compete against the cream of junior golf in Japan is a wonderful opportunity and our previous teams have benefitted hugely from the experience in the past two years.

“Our junior girls have done us proud over the last two years with back-to-back victories. In 2017, Kajal Mistry, Symone Henriques and Kaleigh Telfer represented us for the first time at Royal Harare Golf Club in Zimbabwe.

“Last year, Kajal and Symone returned for duty alongside Caitlyn, who made her national debut at the Royal Dar Es Salam Golf Course in Rabat, Morocco. The teams won comprehensively on both occasions and we are confident that we have selected another strong team this year.

“Both players did well at the Annika Invitational USA early this year, with Kaiyuree losing in a play-off and Caitlyn rallying after a disappointing start with a final round 70 to share the low round honours on the final day.

“Caitlyn has risen to the number one spot in the Open and Junior Rankings this season, with Kaiyuree second in the Junior Rankings and fourth in the Senior standings and they are certainly deserving of their spots on the team.”

Fourteen-year old Floyd, who finished fourth in the Girls B-Division Himbara World Junior Golf Championships, presented by Ciputra, in Indonesia last year, will wear the green and gold for the first time in Botswana.

“Kiera is one of our most exciting young prospects, and we are excited to see how she handles herself in Botswana,” Greasley said. “Since her international debut in Jakarta, Kiera has gone from strength to strength and enjoyed a rapid rise in the rankings.

“She broke into the top five in the Junior Rankings with her Gauteng North Junior Girls Championship win earlier this month and she moved to sixth in the Open Amateur standings following victory in the Mpumalanga Championship late last year and a top five finish in the Eastern Province / Border Stroke Play in January. In addition to their positions in the rankings, Caitlyn also tops our Performance Rankings and Kiera is lying second.

“We are extremely excited at the depth and experience of our three selected players. They have all earned their spots with consistently strong performances and excellent results in the past 12 months and we are confident in their ability to compete at the highest level in Botswana.”