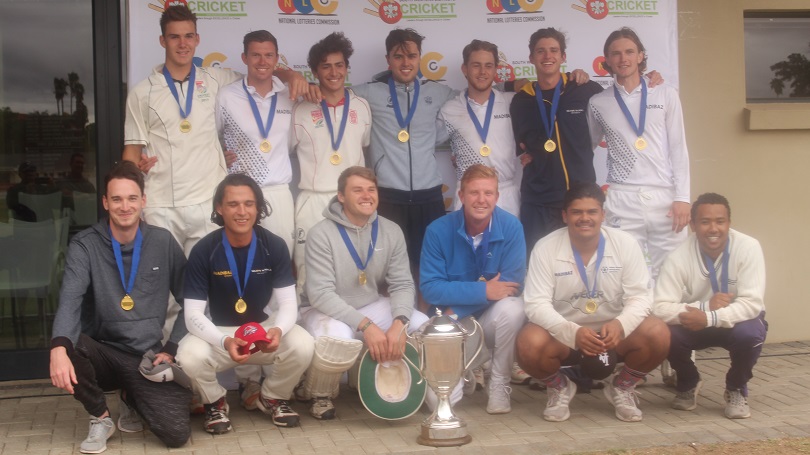 The Nelson Mandela University on Sunday became the South Western Districts premier league champion for the second time when they defeated George by 4 wickets in the final that was played at the Recreation Ground in Oudtshoorn.

The George students secured a place in the final after they defeated the defending champions, Union Stars, by 12 runs in a nail-biting low scoring encounter at the Bridgton Sports Grounds on Saturday.  NMU who posted 104 (all out) restricted Union Stars for 92 thanks to a brilliant spin bowling performance by Joshua Klue (4/9) and Joshua de Ponte (3/15).  It was the first time in a decade that Union Stars, who played in 10 consecutive finals of which they won 9, could not reach the final.

In the final, George posted 148 (all out) with Obus Pienaar (48) who’s run out was a turning point in the innings as the best contributor with the bat.  NMU had an uphill battle in their run chase but a 60 wicket partnership between Todd Walker (44*) and  Joshua Klue (29) for the 6th wicket made them champions for the second time (after 2013/14).  The 17-year old Heath Richards (29) played an impressive innings under huge pressure.

The George students will now, together with the winners of Western Province and Boland play in a round robin series of matches between 29-31 March 2019 to determine the representative from the Western Cape for the Cricket SA Momentum National Champions that will be hosted in Pretoria between 13-17 April 2019.

The summarised scorecards are: