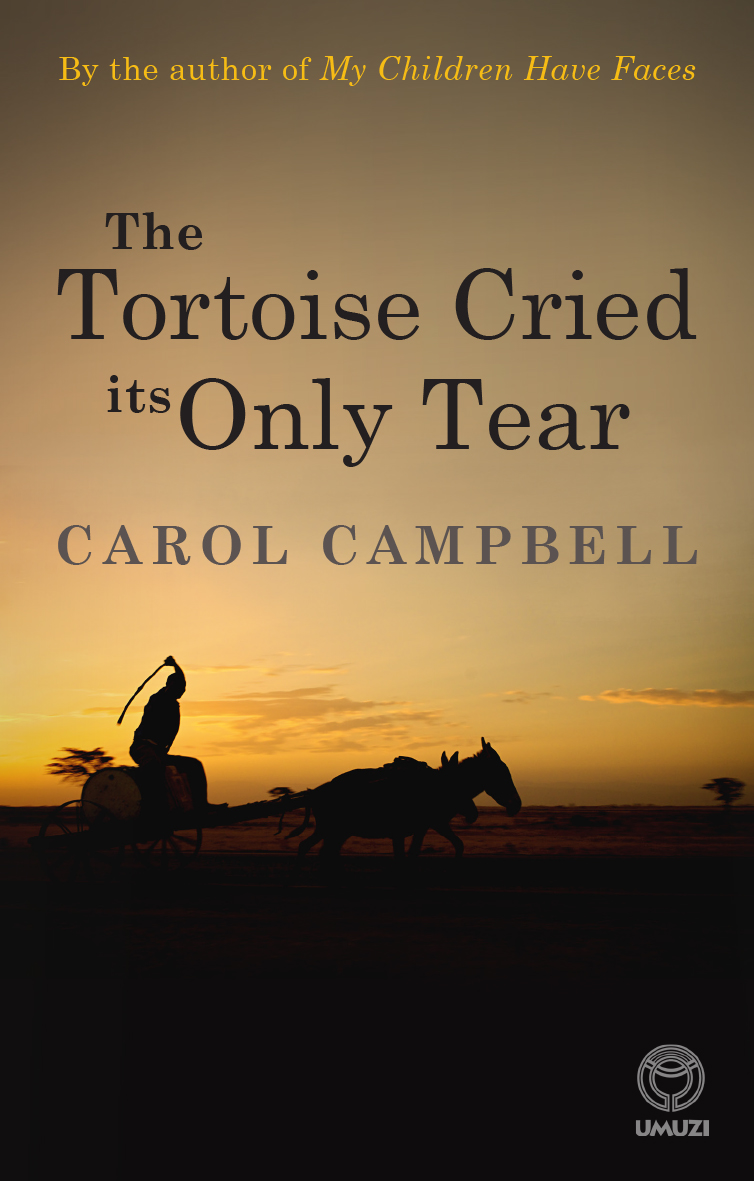 Carol Campbell has gone back to the place she knows so well – the Karoo – for the setting of her third book, The Tortoise Cried Its Only Tear. The other two books are My Children Have Faces and Esther’s House, respectively a novel about the Karretjiemense , an insight into the lives of the “invisible people” and Esther Gelderblom of Oudtshoorn which focused on the corruption in the government housing system.

The protagonist in The Tortoise Cried Its Only Tear is Siena and in the opening pages we find her running helter-skelter, covered in blood, towards her old school, Seakoegat Primary, the only place she has known peace, and where Aunt Esme and Meneer Maans will know what to do. The school is on the tar road to Beaufort West about three days from Prince Albert on the karretjie, but “that was with stops”. Campbell recounts the incidents that sent a desperate Siena to get help.

Siena is one of the karretjiemense and she remembers how, when she was a child, her “Pa” worked as a fencer (a spanner) on many of the farms in the area. It was when Pa was working in the Valley that the mevrou took Siena to Seekoegat Primary and left her there with a packet from Pep with grey pants and a white shirt. She was there to learn to behave, the mevrou said. Siena had been so afraid that she wanted to run back to Ma and Pa. But Aunt Esme, who called her Klimmie, soon put her at her ease. The Valley was also where Siena met Boetie, who was to play a major role in her life. It was also where she witnessed her first killing when the farm owner Baas Jan is murdered by Ou Ana and Majola, the people who took Boetie under their wing. Numerous other characters play a role in Siena’s life: Sex-worker Dolly’s son Kriekie with hands like claws as a result of a beating by a gang and whose warnings about Boetie went unheeded.

There are also the ghost of the past that Siena talks to on her headlong journey.

The book is filled with haunting legends of the Karoo including the mermaids who hide in the waterholes and Outa Dolos, an evil spectre who lives in the river bed. But what haunts Siena most is the tortoise she and Boetie once killed. When they lived on the karretjie Siena begged her father to kill a tortoise so they could eat its meat. It’s easy to cook and there’s plenty of meat. But, no  matter how hungry they were, Pa refused. “A tortoise cries one tear, Sienatjie, and that’s when it dies. I don’t want to be responsible for that tear.” He told her the tortoise is one of the wise men of the Karoo who has seen everything from the beginning of the world. “If you eat a tortoise, everything we know will be forgotten. Never mess with a tortoise.”

At school Siena often thought of Boetie and the old tortoise they had killed. What had they done? She had seen a tortoise’s only tear and afterwards everything had changed.

Campbell has captured the nuances and the flavours of the inhabitants and indeed of the Karoo itself which seamlessly becomes part of the story.

The Tortoise Cried Its Only Tear is a haunting and magical novel that will make you shed more than one tear. But it will leave you uplifted and hopeful.  It is also available in Afrikaans as Die Skilpad se Laaste Troon.