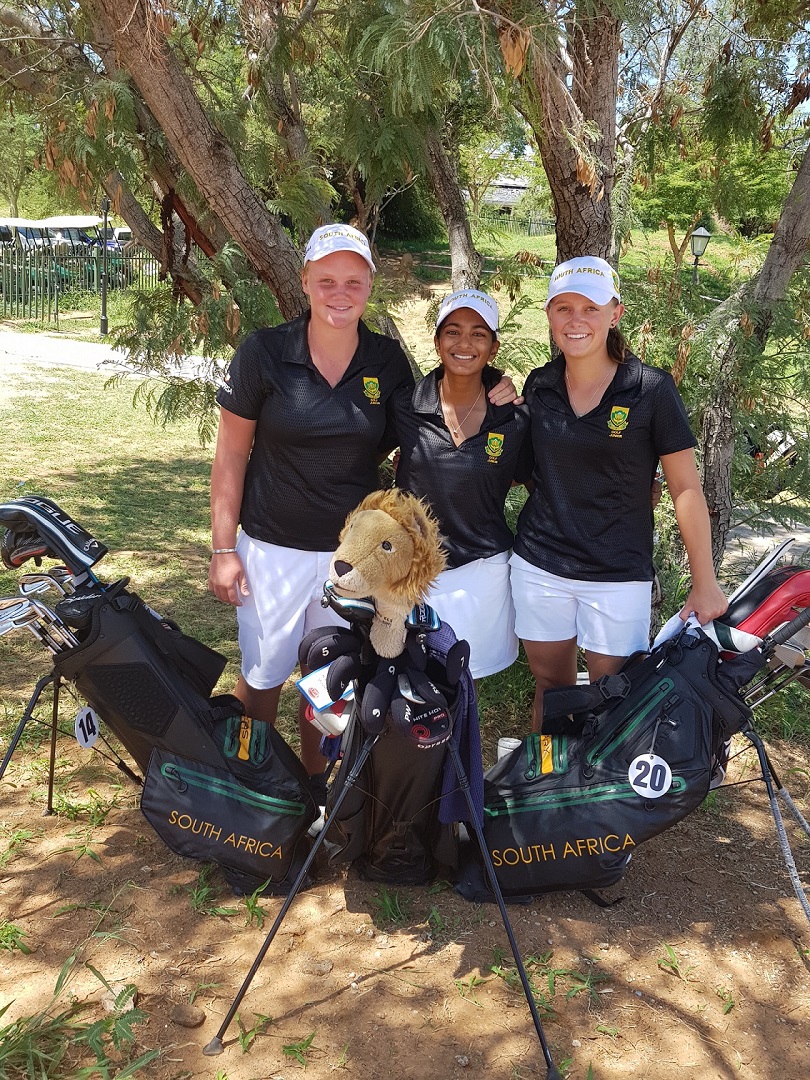 GABARONE, Botswana (12 March 2019) – The GolfRSA teams both got their title defence in the All-Africa Junior Golf Challenge off to a superb start in the opening round in Botswana on Tuesday.

The GolfRSA Boys team combined for a 16-under-par 200 total to lead the Boys Competition while a five-under-par 139 secured pole position for the GolfRSA Girls in the Girls Competition at Phakalane Golf Estate Hotel Resort.

“It was a really good day in the office for both teams,” said GolfRSA Manager: Golf Operations Eden Thompson.

“We had a pretty blustery start to the morning, but with about five holes to do the Africa sun poked its head out and we felt some heat. Casey Jarvis led the team into action and had a very solid round, despite frustration on the greens. He signed for a three-under 69 that set the mood for the team.”

Sam Simpson went out second and started with a bogey but he turned three-under through nine without a birdie on his card.

“After the bumpy start, I holed two 30-foot putts for eagles at the par five four and fifth holes,” said the Western Province junior.

“That came as a big surprise. I made a string of pars and missed an eagle chance at the par five 15th from 15 feet. I made the birdie and had two more before I holed another eagle putt at 18 for 64.

“They have had so little rain in the area and we realised that the course wasn’t in great shape during the practice round. As a team, we adopted a positive mind-set. We decided to forget about how the course plays and to just put up the best scores we can, so I was really happy with my round today.”

Meanwhile Christo Lamprecht was forced to tackle to course with a 3-wood after cracking the head of his driver during the practice round. The Southern Cape golfer also battled to hole putts, but finished with a birdie for a three-under 69.

“Our captain Martin Vorster brought up the rear and never stepped back from the challenge,” said Thompson.

“He put on one of the better ball striking rounds I have seen in ages and, despite three-putting the last for par, he signed for a superb five-under 67 to help the team to a 22 stroke lead over Uganda. Morocco, who finished second last year, placed third on 229.”

“The wind at the start of the round was nice to keep the heat away and I really had a good ball-striking day” said the Serengeti golfer. “I parred my opening hole, but I stuck it to 10 foot at the 11 and sunk the birdie putt.

“I blocked a 4-iron just right of the green at 13, but made a good up-and-down for birdie. At the next par five, I smashed a drive straight into the 3-club wind. I hit a 3-wood to 12 foot and made the eagle putt.

“At the 17th I hit the green, but I hit my first putt way too soft and left the second in the throat for a bogey. I hit the green for two at 18 and two-putted for birdie. I made a bunch of pars after the turn, but at the sixth, I sunk another nice birdie putt and on eight, I drove the green again and had a two-putt birdie. At the ninth, I made another good up-and-down for birdie.

“Our team goal for the second round is six-under and I am positive we can do it. We also had a chance to give back by helping our opponents out with the rules. It was something quite new for us, and we enjoyed the opportunity to teach and guide the other players.”

“We knew Kiera was not up to full strength, but we play as a team and she knew that Caitlyn and I would have her back,” said the Bryanston golfer. “I was one-under after nine holes, but I let shots slip at one, two and three. I struggled a bit with my chipping and the greens are pretty slow and not all of them are rolling pure, so I went to work a bit on my chipping to try to get the ball closer to the pin tomorrow. We are keeping our mind-set simple; hit fairways and greens and try to limit the mistakes.”

Before the start of the tournament, the GolfRSA Girls Team were faced with the possibility that new cap Kiera Floyd might have to miss the first round.

The Ekurhuleni junior went down with a stomach bug during Monday’s practice round, but she rallied and celebrated her debut for South Africa with an opening 78.

“I felt pretty weak over the first nine holes, but I felt stronger over the last nine holes and was really pleased to play the back nine one-under,” said 14-year-old Floyd. “I hit more fairways and greens on the back nine and will definitely try to keep the ball in play on Wednesday to give myself more opportunities to score.”

PHOTO: The GolfRSA Girls team kept their title defence in the All-Africa Junior Golf Challenge on track with rounds of 139 and 138 and lead by 66 shots at Phakalane Golf Estate Hotel Resort in Botswana; credit GolfRSA.