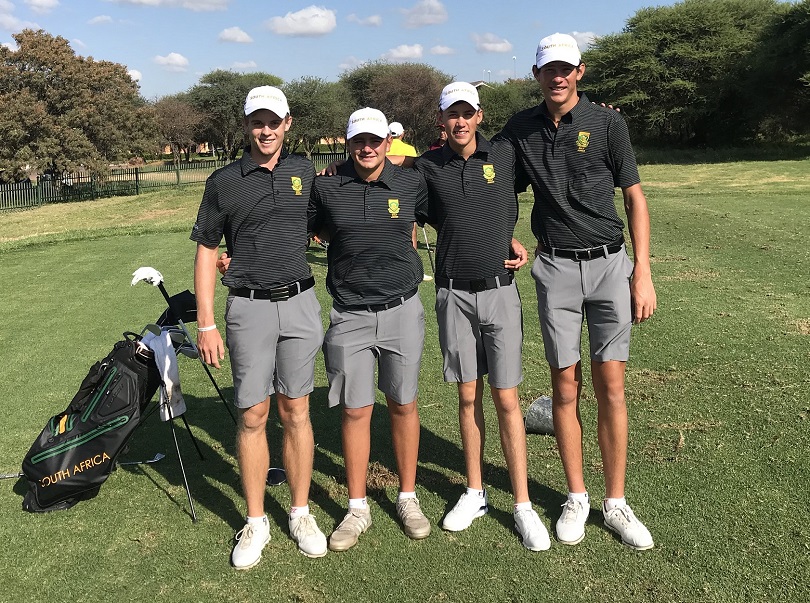 GABORONE, Botswana (13 March 2019) – The GolfRSA Girls and Boys teams strengthened their leading positions with another superb effort in round two of the All-Africa Junior Golf Challenge in Botswana on Wednesday.

The GolfRSA Girls team produced an eight-under par total of eight-under 138 at Phakalane Golf Estate Hotel Resort, while the GolfRSA Boys combined for a second successive 16-under 200 to keep the hunt for a 21st consecutive victory on track.

Gauteng’s Kaiyuree Moodley fired a six-under 67 to lead the GolfRSA Girls, while Ekurhuleni pair Caitlyn Macnab and Kiera Floyd both posted rounds of 71.

“I was very happy with my overall game, but I need to do some work on my putting,” said the Bryanston golfer. “I gave myself lots of chances but I left a few birdie putts out there.”

“Our goal for the second round was a team total of six-under, so I was extremely pleased when the girls combined for 138,” said Womens Golf South Africa President Sally Greasley.

“We started later today, so the team went out in the heat of the day. Without a breath of wind the conditions were tough, but they championed through it.

“The greens are crisping up in the hot weather and were definitely a bit bumpier today, so we left a few lipped putts for birdies out there. The rough right off the fairway is penalising. It’s quite long and you are extremely lucky to find your ball. Loose shots are costly and the short grass next to the greens is equally brutal. It’s very thick and grabs the club, so not a place to be.

“Today is was Kaiyuree’s turn to feel under the weather, but she played beautifully, carding seven birdies against a lone bogey. Kiera was back to full strength and made five birdies and 11 pars, with just a double bogey and a bogey marring an otherwise perfect card.

“Caitlyn, who fired 66 in the first round, had a frustrating day on the greens. Her two-under featured six birdies, but she dropped four shots. It could have been so much better, but her game just wasn’t there today.

“The wonderful thing about this team is that they truly play for each other, and while Caitlyn battled, she knew she could rely on Kaiyuree and Kiera to have her back. The girls once again assisted their opponents with the rules and I was proud to see they knew exactly what the penalties were. It was another great day for South Africa and we look forward to the third round.”

Christo Lamprecht from Southern Cape and Ekurhuleni’s Casey Jarvis led the GolfRSA Boys into battle and the pair respectively posted rounds of seven-under 65 and six-under 66 to set the tone for the day.

The team’s total score after two rounds stands at 32-under and they lead last year’s runners-up Morocco by 47 strokes. Uganda is a further two strokes adrift in third place.