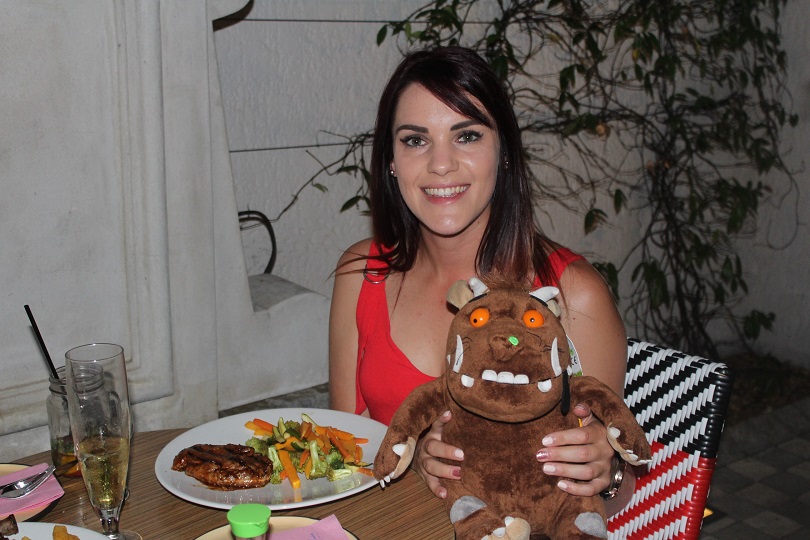 On the 14th of February, a day internationally known as Valentine’s Day, our Nom Nom Eatery guests, in Somerset West were welcomed with a lovely glass of sparkling wine upon entrance as well as a nice warm hug from one of the popular United Kingdom toys the Global Gruffalo. The cute fluffy toy had the crowd up in frenzy with everyone wanting a picture with the Teddy.

Global Gruffalo was launched at Leonardslee Lakes and Gardens in the United Kingdom on January 10th 2019. The international project celebrates the 20th anniversary of the English Gruffalo children’s books and also Horsham District resident and patron of the Horsham District Year of Culture 2019, Julia Donaldson CBE.

Gruffalo toys are currently travelling the globe for one year, switching owners every few days. Each Gruffalo has a backpack with its own story so new owners will know what to do. People are encouraged to have their photo taken with the Gruffalo and upload it to @GlobalGruffalo on Twitter or to the website so that children and others can follow the journeys around the world by visiting  www.globalgruffalo.co.uk

“We are delighted to have hosted the Global Gruffalo at Nom Nom for Valentine’s Day, we could not have picked a better evening. The couples totally adored him and could not keep their hands off of him. We look forward to watching the Gruffalo’s adventures as they all travel around the world.”

All Gruffalos will be returned by December 2019 for an exhibition in UK at the Leonardslee Lakes and Gardens in 2020.

Nom Nom is an everyday eatery, offering a quirky and colourful atmosphere with a delicious traditional menu.

The Perfect Catch & Succulent, Melt-in-the-Mouth Steaks
The perfect ingredients for a long lazy lunch/dinner in Somerset West.  Nom Nom’s fresh local seafood and sushi is expertly prepared and cooked to order. This creates a relaxed vibe of seafood and cocktails that has you feeling like you are on holiday.

Steak is not a dish it’s an institution
Succulent, expertly cooked we can promise you great steaks, great beers and estate wines.

Wines
Benguela Cove wines are served at cellar door prices at Nom Nom.  If you prefer to bring your own wines, then we have a no corkage policy.  So feel free.