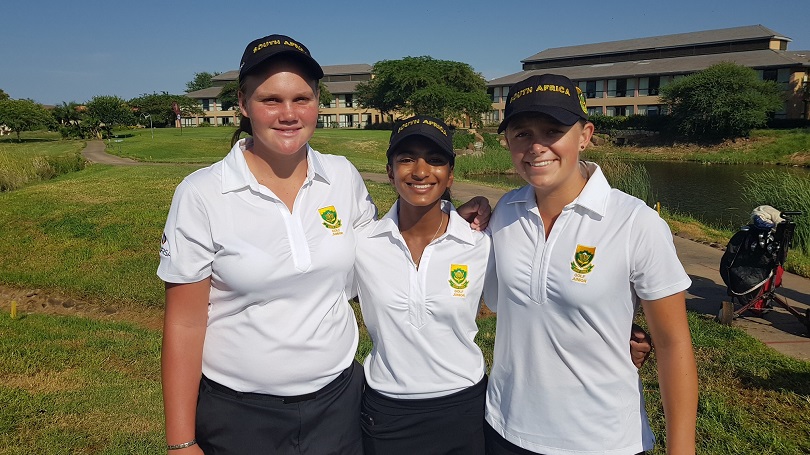 GABORONE, Botswana (14 March 2019) – Both GolfRSA Girls and Boys continued to improve in their title defence campaigns in Thursday’s third round of the All-Africa Junior Golf Challenge in Botswana.

The GolfRSA Boys fired a tournament low 20-under-par 196 at Phakalane Golf Estate Hotel Resort to lead the Boys Competition with a 54-hole total of 52-under-par 596.

Morocco combined for 219 to remain in second on 666, while Uganda retained the third place on the leaderboard on 672 after a third round 223.

The GolfRSA Girls team also posted their low round of the week, a nine-under 139 to top the leaderboard in the Girls Competition on 24-under-par 414. Nigeria posted 183 in the third round to overhaul Zimbabwe for second place.

Wingmen Christo Lamprecht from Southern Cape and Casey Jarvis from Ekurhuleni added respective rounds of 66 and 67 to boost the team tally, while Southern Cape’s Martin Vorster returned a non-counting 71.

“As if two rounds of 16-under weren’t good enough, today the team followed Sam’s lead with pin point irons and lots of patience on the greens to break the 200 barrier.”

Simpson made another good start and birdied at both par fives. He backed that up with further gains at six seven and nine to turn five-under. After a birdie start on the back nine, he racked up more birdies at 13 and 15 to keep the momentum throughout the back nine.

“Sam hit an awesome second on the green at the par five 18th hole and had about seven feet for an eagle, but unfortunately the putt hung out right despite the slope and nap,” said Thompson. “He was very happy with his day, not only with regards the score, but the manner in which he managed his game.

“Martin was first out and fought his putter again on the inconsistent greens. He was very happy with the way he is driving the ball but he had numerous missed putts and had to knuckle down to return a sub-par 71.

“Casey was once again in the zone with a fantastic display of ball striking, but he too had his fair share of frustrations on the greens. Given his score, it seems wrong to say that but numerous putts simply didn’t fall.

“Christo too was “on song” again for the majority of the round. Despite a few wayward shots in the middle of the back nine that made the round look a little scrubby, he scored a solid six under 66. The team is leading by a considerable margin, but we will not back off and will play with pride to the end.”

Ekurhuleni pair Caitlyn Macnab and Kiera Floyd put the counting scores on the board for the GolfRSA Girls team, coming home with respective rounds of 67 and 70. Gauteng’s Kaiyuree Moodley posted a non-counting 75.

Floyd, who had taken ill on the eve of the event, was especially pleased to contribute to the team total.

“I am so happy with the way I struck the ball today,” said the 14-year-old. “I gave myself lots of chances, and I got it five-under, but unfortunately I stuck it in the trees at my last hole and made a double bogey. Still, to go three under today after the way I started is really satisfying and I’m going to try go even lower in the final round.

“We’ve set a team score every day and we’ve beaten it in every round, so for the final round, we’re raised the bar and we’re targeting a 10-under-par total.”