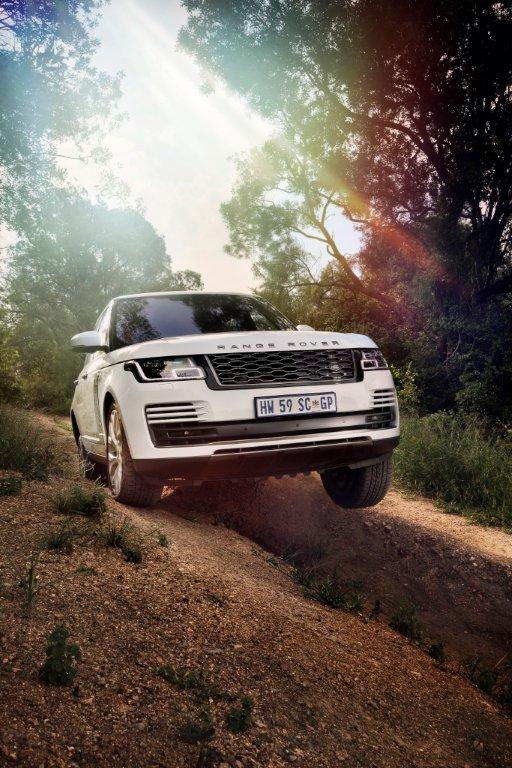 Brian Joss – The new Range Rover and Range Rover Sport have taken major steps toward the future of motoring with the addition of plug-in hybrid (PHEV) drivetrain options, and both variants are now available in South Africa.

Both models are badged P400e in reference to their respective power outputs of 404PS (297kW), and both combine a 221kW 2.0-litre four-cylinder Ingenium petrol engine with an 85kW electric motor. With impressive 640Nm torque figures, the new drivetrains mix dynamic and sustainable performance with traditional Land Rover capability, comfort and refinement.

Each model’s 2.0-litre petrol engine is longitudinally mounted, with an 85kW electric motor housed within the ZF automatic eight-speed transmission at the centre of the vehicle, alongside a 7kW on-board charger. The access point for the charging cable is hidden at the front behind the grille badge of each vehicle. The prismatic cell lithium-ion batteries are mounted at the rear beneath the boot floor.

The powertrain’s precision and control make for serene progress in all conditions and across all terrains. Land Rover’s Terrain Response 2 technology has a unique calibration to intelligently and precisely distribute torque from the electric motor, which has no creep speed and is able to deliver maximum torque from zero rpm, to all four wheels. This gives greater control during low-speed off-road manoeuvres, confirming both Range Rover’s outstanding breadth of effortless capability.

The driver can optimise battery charge or fuel economy by utilising one of two charge management functions: SAVE function – prevents the battery charge dropping below a pre-selected level.

– enables the vehicle to run solely on the electric motor for up to 51km using the energy stored in the battery, the ideal solution for quiet, zero emission journeys.

When rapid charging the 13.1kWh high-voltage lithium-ion batteries, full charges can be achieved in as little as 2 hours 45 minutes at home using an optional 32 amp wall box. The batteries can be fully charged in 7 hours 30 minutes using the 10 amp home charging cable supplied as standard. The Range Rover and Range Rover Sport PHEVs’ batteries are covered by eight-year, 160,000km, 70 per cent state of health warranties.

Thanks to its electrified powertrain, the Range Rover P400e emits only 64g/km on the NEDC combined cycle and can accelerate from 0-100km/h in 6.8 seconds and on to a maximum speed of 220km/h.

The Range Rover P400e is available in both standard and long wheelbase body styles and has been enhanced with added  technologies including a Gesture sunblind which is opened and closed by an advanced gesture control system that senses an occupant’s hand movement. All it takes to open the blind is a rearward swipe in front of the rear-view mirror, and forwards to close,  the Air Cabin Ionisation: uses nano-sized charged water particles to cleanse and purify the air and Pixel-laser LED headlights: advanced technology is brighter and yet intelligently blanks sections of LEDs to avoid dazzling oncoming drivers, are some features.

If you’re working while being driven, up to 17 connection points including domestic plug sockets, USB, and 12-volt are all available; 4G Wi-Fi hotspots for up to eight devices and convenient storage are all designed for the business traveller. The cabin is tailored for relaxation with luxurious seats offering 25 massage programmes thanks to Hot Stone massage technology within the seat backs.

Information can be swiped from one screen to the other, making the layout highly intuitive and engaging to operate, with unrivalled functionality, Jaguar Land Rover said.

The Range Rover Sport PHEV also emits only 64g/km on the NEDC combined cycle and achieves a top speed of 220km/h, but accelerates from 0-100km/h in a slightly quicker 6.7 seconds.

The Range Rover and Range Rover Sport PHEVs are available in South Africa priced from R2 207 300 and R1 639 300 respectively.