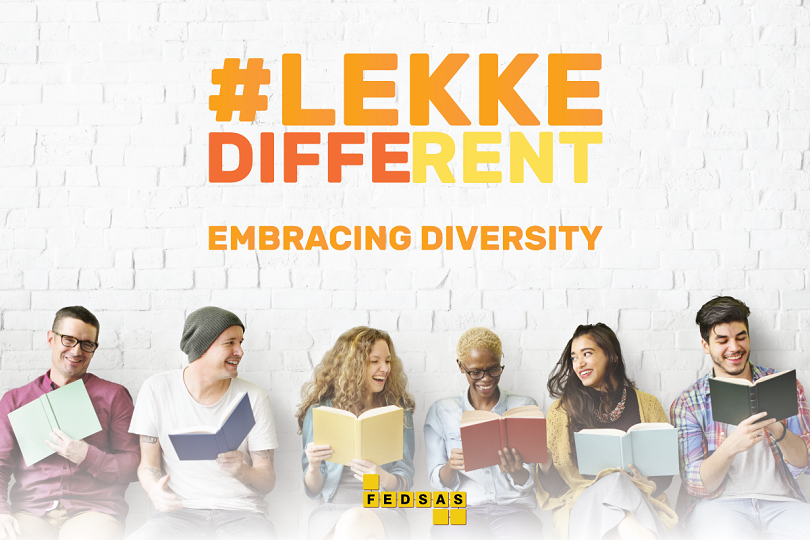 South Africans are #LekkeDifferent, don’t you think? Just imagine how stale life would’ve been if we were all exactly the same.

It’s time to celebrate the things that make us as South Africans unique while at the same time embracing diversity. So what is it that makes you unique? Is it a musical instrument you play or the sports you train so hard for? Are you loud and outspoken or quiet and a good listener?

FEDSAS is the national representative organisation of school governing bodies that informs its members, organises, mobilises and assists them to achieve the highest international approved standards in schools.

Jaco Deacon, deputy CEO at FEDSAS, had a brilliant idea to launch a massive campaign that celebrates uniqueness and embraces diversity. This is how the #LekkeDifferent campaign was born. “Schools are trying to manage racism with policies and rules, and this is clearly unsuccessful. The spotlight shouldn’t fall on racism, but rather on how wonderful diversity is and how much poorer we would be without it,” Deacon explained.

The goal of the campaign is to motivate learners from schools all over the country to celebrate their uniqueness and diversity. FEDSAS aims to get every learner in South Africa to tell their own story about what makes them different from their friends and acquaintances and also how being a diverse group has a positive impact on everyone involved.

“During an election year it can easily happen that people become divided and compared on grounds of language, culture and race, but in a normal South Africa we have to live by our country’s motto by finding joy in diversity and becoming united through diversity,” adds Deacon.

The #LekkeDifferent campaign has officially been up and running since the end of February 2019 and has already gained a great amount of traction in schools across South Africa. Learners are posting photos and videos on social media with their friends, talking about their unique traits and characteristics and how they celebrate being unique while embracing diversity among one another.

If you would like to become a part of the #LekkeDifferent campaign, post a photo or video on your Instagram or Facebook page and tell your story on how unique you are, but that you also have best friends who are different. Remember to use the hashtags #LekkeAnders or #LekkeDifferent and also tag @FEDSAS and @LekkeDifferent in your posts.