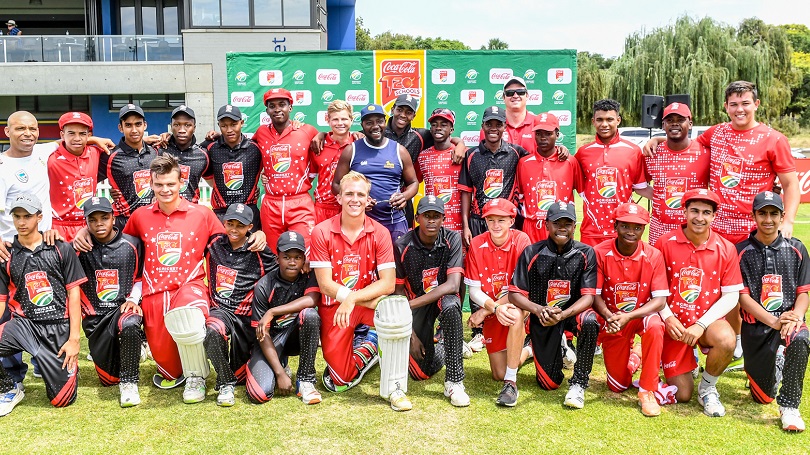 The Coca-Cola® All-Star team completed a ‘dream’ weekend with a hard-fought win against a Cricket South Africa (CSA) Hub team in a curtain raiser to the 2019 Coca-Cola® Schools T20 Challenge National Finals in Pretoria.

SWD’s Jedhli van Briesies from Langenhoven Gymnasium in Oudtshoorn was selected for the Coca Cola All Star team.  Van Briesies also represented the SWD u/18 team during the Coca Cola Khaya Majola week in 2018.   Van Briesies emerges via the Hub development program where he was identified at the D’Almeida hub in Mossel Bay and a cricket bursary was subsequently offered to him by Langenhoven Gymnasium.  “We are proud of his development and progress and we see him as part of our future within in the pipeline”, said Jason Maswanganyi the SWD Academy and U/19 coach.  “We look forward to his continuous progress and development as a cricket player”, concluded Maswanganyi.

The Coca-Cola® All-Star team started their run chase meekly losing Wali Voyoni and Jedhli Van Briesies both to Tshepiso Makau with the score on 4 but they did not panic and continued to chase down the modest total. The big difference between the two teams came when Jannie Claassens came in to bat and smashed 30 off 13 balls including 4 sixes. His peer from Hoer Volkskool Potchefstroom, Timothy Malan marshalled the team to win by 4 wickets.

Paul Harris said, “Coca-Cola® has initiated a good idea by enabling boys that were unfortunate to not make the Coca-Cola® Schools T20 National Finals. The boys played on some of the best fields in the country and trained in the Powerade High Performance Centre which is a top cricket facility where the Proteas themselves train from time to time. I wish the boys a great journey ahead and hope they continue to make their dreams come true on and off the crease.”

PRETORIA, SOUTH AFRICA – MARCH 17: Teams at the end of the match during day 3 of the Coca-Cola T20 Schools National Finals at Tuks Oval on March 17, 2019 in Pretoria, South Africa. (Photo by Sydney Seshibedi/Gallo Images)