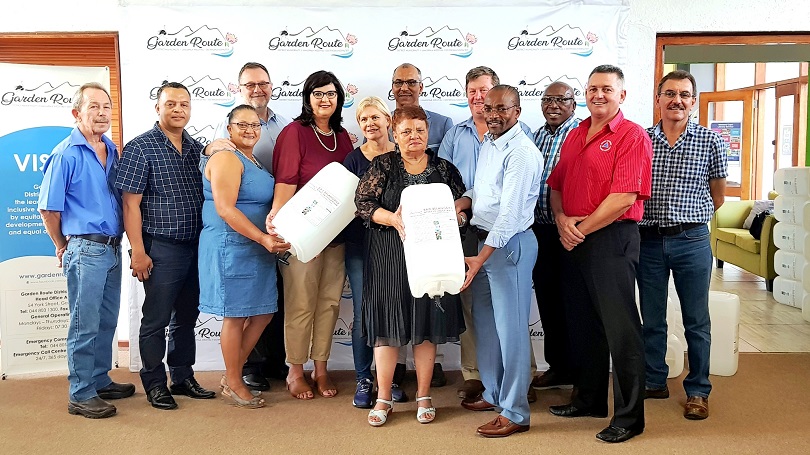 The residents of Zoar in Kannaland will now be able to store their potable water in proper containers, after the Executive Mayor of Garden Route District Municipality (GRDM), Cllr Memory Booysen, handed over 850 x 20 liter water containers to Kannaland on Friday, 15 March 2019 at the Library Hall in Ladismith. Assistance to Kannaland by GRDM was supported by the full Council of GRDM.

The potable containers were handed over to the Executive Mayor of Kannaland, Cllr Magdalene Barry, in the presence of the Western Cape Minister of Environmental Affairs and Development Planning, Mr Anton Bredell, Western Cape Minister of Agriculture, Ms Beverly Shafer, officials from GRDM and Kannaland Municipality, as well as farm owners and community members of the area.

Mr Gerhard Otto, Manager of Disaster Management of Garden Route DM, during the event, also sketched the dire situation of the dams in Kannaland and thereafter a farm owner raised concerns on how the situation resulted in job losses and affected food security. Mr Willem Burger from the Western Cape Department of Agriculture, delivered a summary of how the Department assisted Kannaland through support programmes and projects rolled out in the area during the past years.

During his address at the handover ceremony, Mayor Booysen emphasised and specifically highlighted to all present about negotiations for a district wide developmental project, which the GRDM is currently busy with.  Mayor Booysen said that the project will generate approximately R100 million for the Garden Route district. Although it will mostly affect the coastal areas, he added: “As soon as we receive the accreditation as water service authority, we will then be able to change the focus of the negotiations to address the needs of the Kannaland community, especially the drought and food security, amongst others”.

To the farming representatives and all officials present, Mayor Booysen said:  “We will need your skills and knowledge to assist us in leading the negotiations into a direction required to address these challenges”.

During the event, Minister Bredell, also announced his plans and what his Department has in store for the community of Kannaland. Bredell admitted: “The only solution to address poverty is job creation”. He added:  “With the resealing of the road between Calitzdorp and Oudtshoorn, as well as the building of a new clinic, jobs will be created – these projects amount to R 38 million.” To address the drought in the area, he added: “We plan to drill two boreholes (R3.4 million) and  plan to rehabilitate the waste water treatment plant that will amount to R195 000”. The Zoar waste water treatment works (R745 000) and also the Calitzdorp waste water treatment works (R1.5 million) is also on the priority list. “Through these initiatives, it is important that we prioritise job creation as part of these projects,” Bredell added.

As part of their itinerary, the delegation then visited farms in the area to witness the current situation and affects of drought in the area. Ms Aletta Theron, Speaker of the Kannaland Council, directed the hand-over programme and extended a word of appreciation to the delegation and representatives who attended the ceremony.

Executive Mayor of Garden Route District Municipality, Cllr Memory Booysen (front, right), officially hand over the containers to Executive Mayor of Kannaland, Cllr Magdalene Barry (front, left) in the presence of the rest of the delegation and officials.