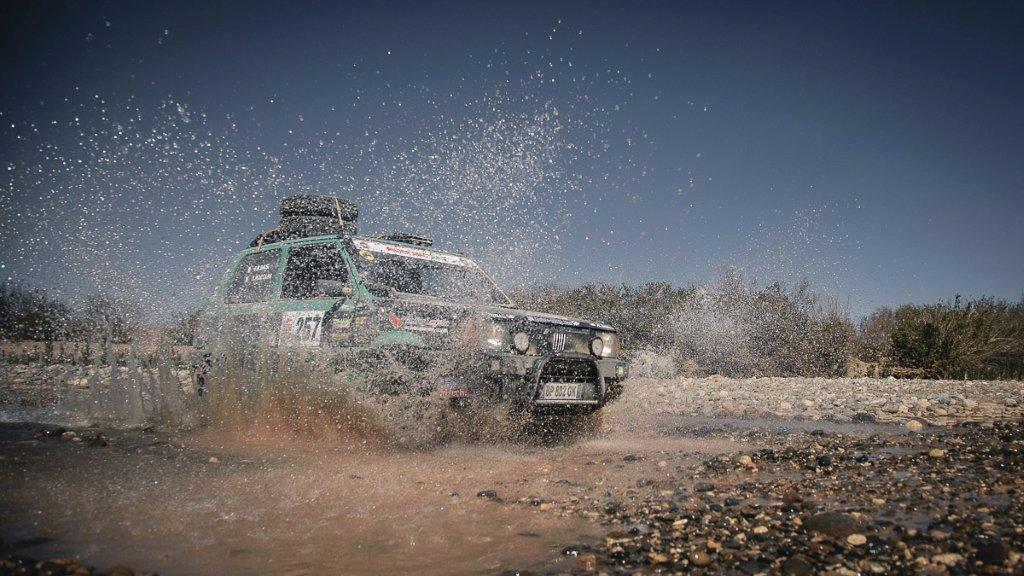 Brian Joss – Now in its 11th edition, the Panda Raid regularity rally reserved for 4×2 and 4×4 Panda cars made before 2003 has become a classic on the Rally Raid calendar, which is the category of the legendary Dakar but retaining its amateur spirit.

This year there were 400 vintage Pandas from all over the world on the start line in Madrid. They set off to travel over 3,000 kilometres, from the Spanish capital to Marrakesh, the pearl of the desert.

The colourful caravan crossed inaccessible places that would have been a tough challenge even for many an expert, larger size off-roader. The course did not put off the unstoppable Fiat, which once again was proven to be perfectly at ease in sun-flooded villages and on sandy trails. The vintage cars were joined by the current Fiat Panda Cross 4×4, with 0.9 TwinAir Turbo engine, that covered the entire course with trademark aplomb, even coming to the rescue of some the veterans engaged on the desert dunes. It was a symbolic handover between past and present for the Fiat that since 1980 has been the manifesto of “freedom on four wheels” chosen by over 7.5 million motorists across Europe.

After setting off from Madrid (on March 8), the picturesque caravan headed towards the coast, more precisely to the port of Motril, from where it was a short ferry ride to the Mohamed V Dam in Morocco. This is where the raid came into its own, taking on desert trails, sandy patches, glimpses of the desert and endless landscapes as far as the eye can see, touching the towns of Bel-Frissate, Maadid, Merzouga, Tazoulait and Tansikht. The final stage was on 15 March, finishing in legendary Marrakesh.

Welcomed enthusiastically by the locals, the champion of the desert was the current Panda Cross 4×4, the natural successor of the legendary Panda 4×4 launched 35 years ago, which combines the traction system typical of a true off-roader with the compact size and agility of a city car. The Panda Cross can overcome any obstacle, courtesy of extra 2.2 centimetres of ground clearance than the 4×2 configuration and its characteristic measurements that allow an approach angle of 24°, a breakover angle of 21° and a departure angle of 34°. This comes with very respectable off-road driving behaviour secured by the permanent all-wheel drive system – which Panda first introduced to the segment – paired with Drive Mode Selector offering three different settings (Auto, Off-Road and Gravity Control). More in detail, in the “Auto” position, the Panda Cross 4×4 behaves like a front wheel drive car and the rear wheels receive more traction only when needed.

In the “Off-Road” position, instead, torque is distributed across all four wheels and motive force is transferred to those with the most grip on the ground by the ELD (Electronic Locking Differential). Finally, with the selector in the “Gravity Control” position, the system acts on the brakes on steeper descents to maintain the optimum control of the car.

The success of the “Panda Raid 2019” complements the many technological and sales records of the model. Not by chance, the Panda has been the best-selling city car in Europe for the past 15 years and the undisputed leader in Italy since 2012. As well as being the first city car with 4WD (1983), the Panda was also the first car in its segment to win the coveted “Car of the Year” title (2004) and in the same year it was also the first city car to climb to an altitude of 5,200 metres to the Everest base camp.

In 2013, it was the first car in its class to introduce autonomous emergency braking. Last year, the Panda Waze, the most social Panda ever, was the star in Pandino (CR) of the largest Panda gathering in the world with 365 different cars from all over Europe.