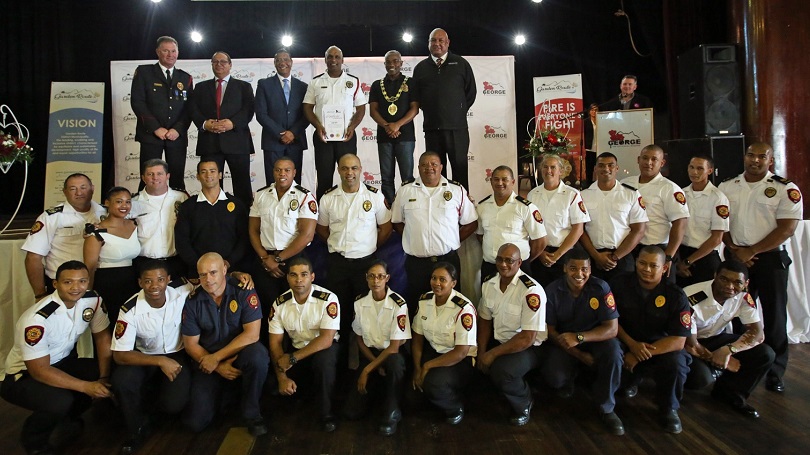 The George Municipality and Garden Route District Municipality today (29 March 2019) honoured the many roleplayers who worked during wildfires that raged in and around George in October and November last year.

The month-long fires were the largest in the province in terms of hectares burnt in recent history and the second largest mobilisation of resources after the Knysna fires in June 2017. Nine people were killed in the extended fires of that period (Farleigh between Knysna and George, and a pilot at Vermaaklikheid) and more than 92 000 hectares burned in twelve fires from 21 October to 21 November 2018 in George, Hessequa, Mossel Bay, Knysna and Bitou.

Speaking at a luncheon in the George Civic Centre, George Executive Mayor Alderman Melvin Naik said the commitment and dedication of everyone who collaborated in the massive operation were to be commended. “People from all races and walks of life stood together in fighting this fire. It tested our people to the limit, but it proved more than anything that tough times will not persist, but tough people will.

“In addition to the people that were directly involved in the many aspects of the fires, private individuals and businesses from around the country and the world made contributions of money, supplies, food and moral support. We also thank the many churches and organisations for their sincere assistance, making their halls and resources available to shelter displaced people. We could never account for all the people who did their part, but hope they will know that they are appreciated.”

Mr Naik also thanked God for protecting the town of George and unveiled a banner in front of the Civic Hall professing George’s reliance on God in all things. Candles were lit and a minute of silence observed in memory of those who had lost their lives during the fires.

Garden Route District Executive Mayor Alderman Memory Booysen said many lessons had been learnt in the fires in Knysna in 2017, which had better equipped and informed roleplayers and politicians for the George fires last year. “As politicians we had learnt to let the skilled people do their work and to stay out of their way – and to be there to support when we are called upon.

“While we are here to honour the specific roles played in the recent fires, we acknowledge that our people in uniform are heroes every day. They are not just called out to fires, but to car accidents and other incidents, all of which they do diligently. We have so much respect for what you have done and will continue to do, and we salute you,” said Alderman Booysen.

The mayors awarded certificates of appreciation to representatives of the many roleplayers including firefighters, municipal officials, government departments and agencies, welfare and community organisations, volunteers and large property owners on which most of the fires occurred including SANParks, CapeNature, PG Bison and Cape Pine.