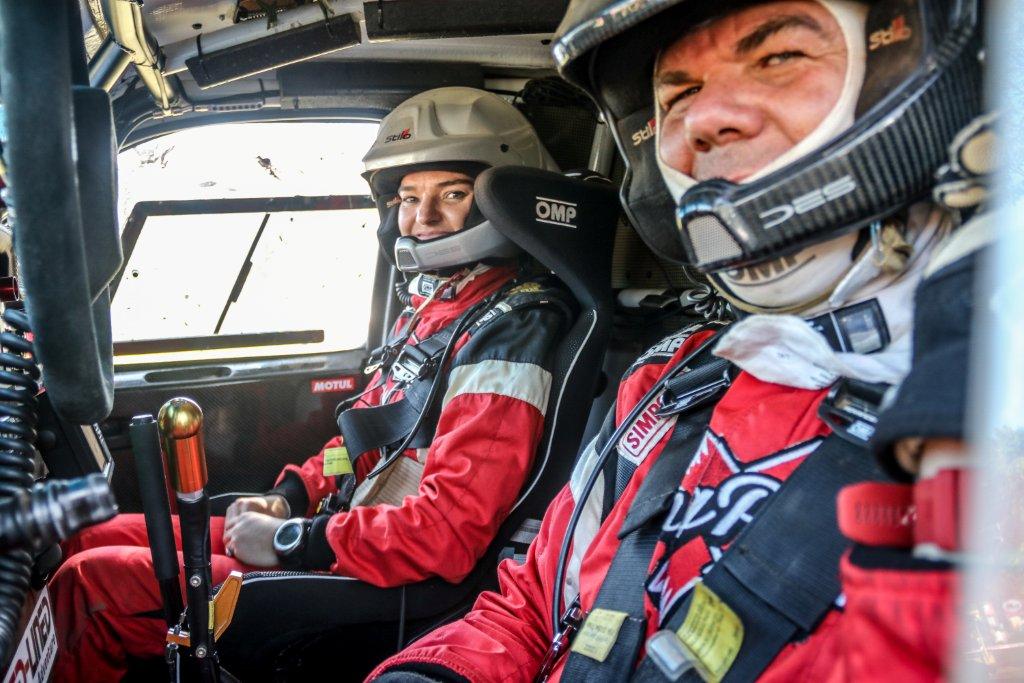 Brian Joss – The common understanding of how to best get from point A to point B is a straight line. Sometimes these lines can meander, and the length of that line can vary and this most certainly is the case here.

For Schalk Burger (Schalk Burger Motorsport) the beginning and end point of the journey are clear but what happens in between is the unknown. The dream of Dakar has now become a realistic goal for Burger as he brings with him years of high-end rally and cross-county driving. True that his first foray into the world of cross-country racing was very nearly his undoing.

Back in 2017 Schalk along with Elvene Vonk, his navigator of choice, lined up to take on the National Cross-Country Championship competing in the wild, open wheeled world of the Special Vehicles that thunder through the bush in the class A category. A very different world from the refinery of rally cars. These V8 powered monsters with huge tyres, needed to keep the traction down where all that power is sent to the rear wheels only. Unlimited suspension travel and the ability to hit eye watering speeds through some of South Africa’s roughest terrain.

The season began with mechanical troubles hampering the pairs progress at the opening rounds and it was clear that Burger and Vonk had hoped for so much more. On the season the often-unknown quantity is the event that brings the championship to the hallway marker, the Botswana Toyota Desert 1000. The event on the local calendar is the one that everyone wants to win, and event that can be the making and breaking of a championship and in some cases can deliver a punishment that far out weighs the crime.

This was the case for Schalk Burger and Elvene Vonk at the halfway point of the 2017 Championship. Whilst running inside the top five at the event an incident with another vehicle sent the King Price Extreme porter into a deep sand turn at too great a speed to be controlled and the beast of a vehicle flipped over leaving both driver and navigator stranded in a precarious position in the desert.

Elvene was able to free herself even if it was still a struggle for her, but for Schalk there were bigger issues. His hand had been crushed as the vehicle rolled over and the 2-metre-tall Burger battled to free himself from the vehicle due to the damage to his hand.

Eventually Burger was freed from the race car and there began more than 12 months of surgery and rehabilitation. There was a dark moment early on where not just the fingers but the entire hand was in jeopardy. Working with the best surgeons available and with extensive physiotherapy the injuries were remedied and towards the end of 2018 the fire was once again in Schalk’s belly, firing him up to prepare for the ultimate comeback.

Dakar has been a dream for many a driver but now with the event running in only one country, Peru, and with a large South African contingent making up part of the bivouac it is an achievable goal.

The Road to Dakar then begins like a jigsaw puzzle, slowly and carefully putting the pieces together to fit perfectly. The navigation piece of the puzzle was an easy decision. Friends, colleagues and able to work well together as a team, Elvene Vonk was once again brought in as navigator of choice. Training would be made up of a mixture of local National and Regional Cross-Country events along with numerous trips up to the sands of Namibia to fine tune in the dunes along with a rigorous physical training regime that will see Schalk arrive at Dakar some 25kg’s lighter to bring down the combined racing weight of the vehicle.

The vehicle is a massive part of the journey and Schalk is working with local race engineers to develop a brand-new vehicle which will see an all new brand take on Dakar. These vehicles should be ready by the halfway marker of the year and turn the first wheel in anger at the Desert 1000 event.

In the mean-time getting on with the job from the Point A was the first task. Dullstroom and the Mpumalanga 400 which made up Round 1 of the SACCS (South African Cross Country Championship). A vehicle was sourced from Red-lined Motorsport in which to get the all-important seat time and for the pair of Burger and Vonk to once again gel together in the car.

With just one regional event in the car and little testing time prior to Dullstroom it was very much an unknown factor as to how the team would perform for the first national outing of the season.

The quagmire that was a feature of the 2018 event was a thing of the past and although there were a few small swamps to deal with, the 400km were mostly dry and dusty with a mixture of open and forest roads mixed in with off-piste. Car set up was a focus for round one as the team worked on getting the suspension set up correct to suit Burgers style of driving.

From four-wheel drive rally, to two-wheel drive off-road special vehicles and now all-wheel drive Rally Raid FIA (International/ Dakar) spec production vehicles is a journey all in itself. Problems on the opening days 67km long prologue had Burger and Vonk in 14th overall and 7th in class FIA.

Overshooting due to lack of traction was the culprit for these early event issues so suspension set up was adjusted going into the race day where more than 330km’s would be tackled over the two racing loops.

Schalk’s approach to race days showed that he was willing to adjust within himself and his driving style to improve on his result. The feedback at the end of lap one was that the course was unforgiving, and no mistakes were tolerated and often punished with punctures and mechanicals if you stepped out of line.

In the end of a tough 400km event the pair had improved on their prologue time to bring home a 12th overall finish and take a 6th place finish in class.

At the finish both Schalk Burger and Elvene Vonk were clearly exhausted, as were all the teams. The Mpumalanga 400 had asked a lot of driver, navigator and vehicle alike at the opening round of the championship and sets the scene for the rest of the season as 2019 unfolds.

For Schalk and Elvene their journey has truly begun and the Road to Dakar lies before them as they leave point A behind them and keep their focus on the horizon. The teams next challenge will be the Berg 400 in Winterton KZN on May 17 and 18 at a new venue where they will continue to develop and prepare and always stay positive moving forwards.