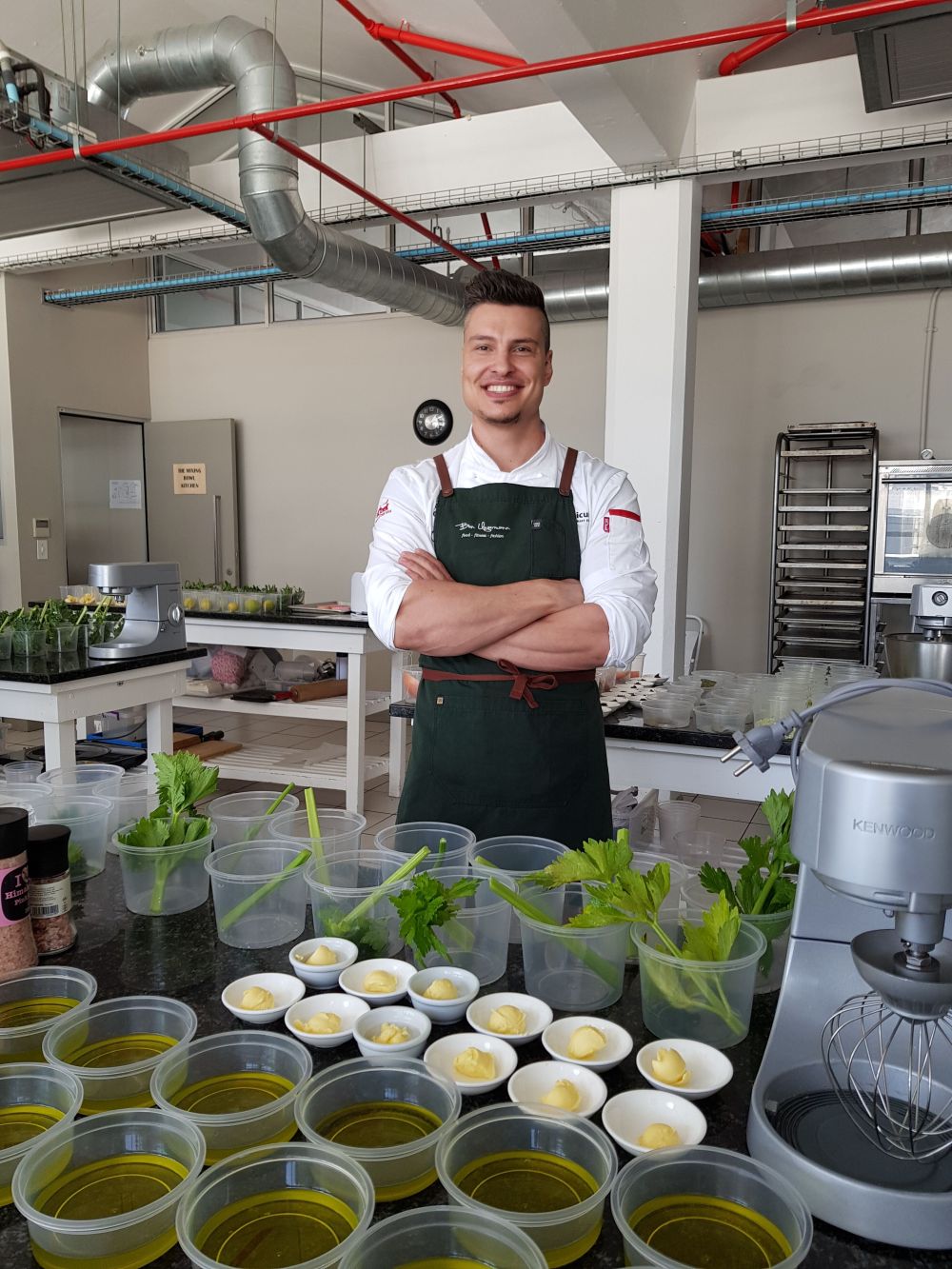 At a Capsicum masterclass series sponsored by S. Pellegrino and Acqua Panna, Chef Ben Ungermann talks about how Australian Masterchef kick-started a culinary career across many countries and the importance of the global gastronomic community to a young chef’s career.

Cape Town, South Africa, April 2019 – Placing high in an international cooking competition is becoming a recognised path for young chefs to gain experience, recognition, career advancement and exposure to the global gastronomic community. While young chefs in professional kitchens can learn a huge amount and make their name in prestigious competitions such as S.Pellegrino Young Chef, for Ben Ungermann, as a previously untrained home cook, it was the 2017 season of Australian Masterchef that brought him celebrity status and a whole new career.

S.Pellegrino and Acqua Panna recently sponsored waters for a series of Masterclasses given by Ben at Capsicum Culinary Studio in Johannesburg, Port-Elizabeth, Pretoria, Durban and Cape Town. He told us about his experiences during the Masterchef competition and since then.

“Shannon Bennett, my mentor on the show, described Masterchef as the single hardest but most rewarding apprenticeship in the world,” says Ben. “That’s what it felt like. The show took about seven months to film, and you’re cooking intensely every single day. You’re in an environment that although it’s very tough, you’re given every opportunity to flourish.”

Coming second in the show made Ben a household name in around 130 countries. It also gave him the opportunity to connect with top chefs, including Heston Blumenthal, and he was later able to stage at Dinner by Heston under Ashley Palmer-Watts. “Heston made an appearance on the show, so I asked the question. Working in his restaurant was a real eye-opener – there was no yelling, screaming, no chatter, everyone knew what they had to do, an incredibly well-oiled machine.” He then worked on pastry with Clare Smyth, who recently earned her second Michelin star at Core, and spent time at several other top restaurants around the world. Since then he’s opened a gourmet artisan ice cream parlour with his brother in Australia.

Ben’s Dutch and Indonesian heritage was highlighted during the show and Indonesia has become a home from home. Now Ben is about to open his first restaurant in Jakarta. “I’ve spent a lot of time in Indonesia doing guest appearances, my reputation has grown a fair bit, I’ve become an ambassador for a chef’s cooking utensil company, and a load of opportunities just opened up for me.”

But Ben is the first to stress that the opportunities presented by the competition are what you make of them. “Had I rested on my laurels and expected things to fall into my lap I’d be back selling shoes. I’ve had to work incredibly hard to get to where I am now. The show doesn’t push, it’s up to you once the show ends. The best thing I ever did was go to a load of different restaurants around the world and just be a sponge. It increased my cooking abilities so far and changed the way I look at food.”

His advice to anyone interested in a career in food. “It is really important for young chefs not to be closed off and think there’s just one way to do something. Really open your eyes, be a sponge and just absorb information, it seriously increases your skill level.”

Capsicum Culinary Studio sees international connections as essential in the industry. Their professional qualification is internationally recognised and accredited, and they have links with SEG hospitality and culinary schools in Switzerland. Lianne Holt, Principal of the Cape Town campus, says “It’s important for young chefs to get global exposure. Although South Africa has a very mixed cultural heritage, along with international trends, it’s important to experience the authenticity of other countries and what they are doing in kitchens around the world, it’s vital.” Underlining this, the prize for the internal Capsicum competition between students at all their campuses is a six months trip around the world to gain experience in the industry.

“Go work in any kitchen anywhere before you settle,” advises Lianne, “get all the experience you can possibly get, whether it’s a bar in London, a five-star hotel in Europe, and steal with your eyes while you’re there.”

S.Pellegrino is calling for entries to S.Pellegrino Young Chef 2019/20. Chefs aged under 30, who have been working in professional kitchens for at least a year, are encouraged to take this opportunity to expand their horizons. Dishes presented will be evaluated on the three Golden Rules – technical skills, creativity and personal belief – and those shortlisted go forward to the Africa and Middle East regional finals, working with a mentor to perfect their signature dish. Winners of the regional finals will compete at the grand finale in 2020. This global talent nurturing programme is a unique opportunity to compete with young chefs from around the world, connect with top names in global fine-dining, and gain a world of experience.