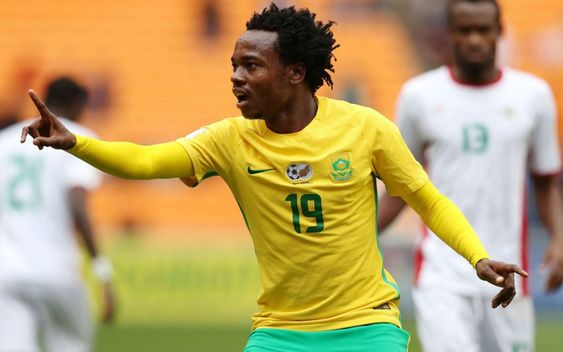 South Africa will be playing in the Africa Cup of Nations knockout stage after scoring a 2-1 away win over Libya just this March. This achievement was made possible by the diminutive yet dynamic Percy Tau, whose brace pushed South Africa into the 24-team tournament to be held in Egypt this coming June.

Tau, incidentally, is beginning to look like the emerging face of South African football. He was called up to Bafana Bafana by Owen da Gama in March 2017 for a pair of friendlies against Guinea-Bissau and Angola. Then just 22 years old, he amply rewarded da Gama’s faith with an immediate goal against Guinea-Bissau. Even da Gama himself, however, seems pleasantly surprised by Tau’s development, punctuated by the aforementioned strike against Libya.

“I have been amazed at how Percy has grown as a player‚ he continues to develop at a rapid rate and just gets better and better‚” da Gama says of the now 24-year-old Bafana Bafana forward. “He scored for me in his first game but even before that I could see this was a boy who has got something special‚ something a little different‚” da Gama adds. “I knew he would get better and better‚ but I must admit he has become a more accomplished player than even I expected.”

Tau has also made a believer of Ian Wright, a legend for Arsenal in the prestigious English Premier League (EPL). According to Wright, Tau is good enough to play for Brighton and Hove Albion, the EPL club that paid some R50 million in transfer fees to secure Tau’s services. “Look at Percy, I’ve seen him. You can’t tell me Percy cannot play at Brighton,” chimed Wright. “He’s good, brilliant . . . a good footballer, man! You have to judge people on their abilities.” Unfortunately, Wright’s endorsement of Tau has been rendered moot for the time being, as the young man failed to acquire a work permit for the UK. The Premier League club was therefore forced to loan him to Belgian club Royale Union Saint-Gilloise in Belgium.

In retrospect, Albion sure could have used Tau’s dynamic skillset given its struggles this EPL season. The team is currently 15th in the EPL standings, and is very close to the bottom three. A bottom three finish would mean relegation to the English Football League, a level down from the EPL. While the club is moderately safe for now, it’s worth keeping an eye on the scores, because a late-season slide could mean relegation for Albion. Having Tau around would not, of course, have guaranteed that the club could avoid this danger zone. But from what Tau has shown elsewhere, it appears he could have helped quite a bit. Maybe — just maybe — Albion would not be where it is now in the standings.

Tau’s talent, ultimately, is undeniable. That he has been unable to secure a work permit to take his talents to the EPL is an obstacle, yes, but not the end of the line. He has his entire career ahead of him, and further success in some of the world’s best leagues would be inspirational for other South African footballers as well (including those of Madibaz FC, whose rise in the ranks has been documented here in The Gremlin!). In the meantime, here’s hoping Tau’s talents can propel the South African national team this summer the way they might have helped Albion under different circumstances.