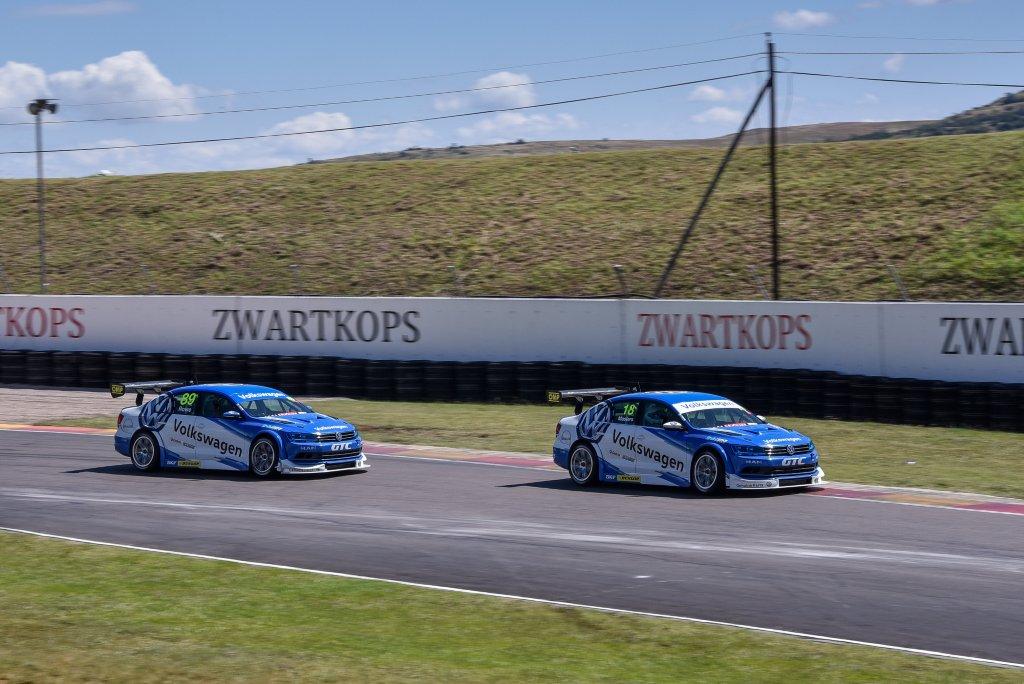 Brian Joss – It was a mixed bag as far as the overall results were concerned for Volkswagen Motorsport’s Global Touring Car outfit after Round 2 of the Extreme Festival held at Pretoria’s Zwartkops Raceway.

regBut even so, the team leaves Pretoria as the overall points leader on the manufacturer’s points table while its two drivers Masters and Rowe are both within striking distance of the top spot on the driver’s table. The team’s domination of the

GTC2 category continued with a clean sweep of victories for Bradley Liebenberg.

For any racing driver, the aim is always to win races, but for the Volkswagen Motorsport squad the ultimate goal for 2019 is to claim both the driver’s as well as the manufacturer’s titles. A fourth and fifth on the grid after the early morning qualifying session for Daniel Rowe and Keagan Masters was not ideal, but the two teammates knew that it was how they would finish in the two races that counted. Rowe made a great start in race one to move into third position before finally crossing the line in second. He was followed by teammate Masters who ended race one in third position.

The first lap of the second race however caused havoc throughout the field.

Daniel Rowe was near the front of the field but contact with another competitor sent him off the track and into the kitty litter. With the other competitor then crashing out of the race a few corners later, the organisers were forced to red flag the race while the cars were recovered from the circuit. Quick thinking by the Volkswagen crew saw them sending Rowe’s Jetta out on track just in time as the race restarted to collect the valuable points that come with a race finish. Meanwhile at the front of the field, it was Masters who closed in on the leaders. But the young man ran out of laps and crossed the finish line to claim his second third placed finish of the day. In the GTC series, the total times for both races are added up to determine the overall winners on the day, and when the calculations were made, Masters missed out on the overall victory by one single second while Rowe’s recovery earned him the points that came with sixth overall. “I had a good and consistent day, exactly what you need as far as the overall championship is concerned,” said Masters after the day’s racing. Rowe on the other hand was somewhat disappointed. “We had a great first race and I had made up a lot of positions on the first lap of race two when I got taken out. Even so, I’m happy that the team managed to get me back on track and I still earned valuable championship points,” said Rowe.

Volkswagen’s dominance in the GTC2 category continued over the weekend with youngster Bradley Liebenberg setting the pace in qualifying and taking two comfortable victories. The Golf GTi driver romped away in race 1 to take the flag a full 7 seconds ahead of his nearest rival, while teammate Adrian Wood in the Kyocera-backed car finished a close third. The grid for the second GTC race is always reversed in an effort to make it more exciting for the fans as the fastest drivers usually have to fight their way through the field and this is exactly what Liebenberg did. His winning margin was once again 7 seconds, this time with teammate Wood taking second place. “I felt a little bit of pressure last night as I really wanted to convert my early pace into race wins, but then we got pole this morning and I then managed to dominate both races. So far we have four out of four victories this season so I’m very grateful,” said Liebenberg.

“We came here with a very clear objective this weekend,” said Mike Rowe, head of Volkswagen Motorsport. “Although it would have been great to win the event overall, Volkswagen leaves round two as the points leaders on the manufacturer’s points table and Keagan and Daniel are second and third in the championship respectively and well within striking distance,” he concluded.

The team will now focus on preparing the cars for the next round which takes place on Cape Town’s Killarney circuit on the weekend of 10 and 11 May.