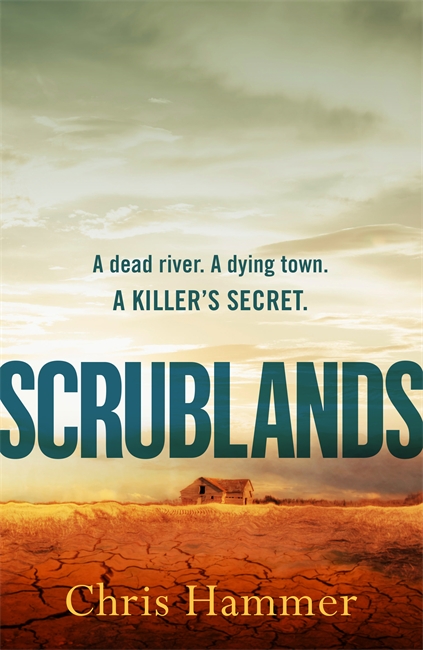 Sydney journalist Martin Scarsden lost his mojo while he was on assignment covering the Gaza conflict when his driver locked him in the boot of his car in a bid to avoid a road block. The Israelis finally freed him after he spent three traumatic days in the back of the vehicle, where all he could hear was the sound of gunfire and explosions.

To help him regain his confidence, Scarsden’s editor and mentor, Max Fuller,  sends him in to the Australian Outback  – to Riversend in the Scrublands – a town that’s in the grip of a severe drought to write a colour piece, a year after the much-loved priest guns down in cold blood five members of his congregation. And the town’s policeman Robbie Haus-Jones kills the priest before he can shoot any more people.  Scarsden’s brief is to find out how the people are coping after the tragedy that unfolded on the steps of the St James church one blazing hot Sunday. The residents are still asking why? But the answer is not clear cut.  Scarsden also has to deal with a lot of animosity as a result of the story his colleague, D’ Arcy Defoe wrote, which many townspeople believe was inaccurate.

There are lots of rumours circulating in the dry, dusty, smothering heat about the priest, Byron Swift, among them that he is a paedophile and the men he killed were coming to beat him up because he abused one of their sons.

One his arrival at Riversend the first person Scarsden meets is a beautiful young woman, Mandalay “Mandy” Blonde, who owns the Oasis, the bookstore and coffee shop she inherited from her mother Katherine.  Mandy, the mother of a toddler, tells Scarsden that Byron was like “a saint or something”. He saved her life and treated her and her mother kindly. Although Mandy doesn’t want to be part of the story she pleads with Scarsden to find out why he did it.

Scarsden’s investigation opens a can of worms and nothing is as it seems. Haus-Jones who was also traumatised by the tragedy lets slip that before he died the priest told him, “Harley Snouch knows everything.” There’s much more to the death of the five men than meets the eye. The plot centres on four different crimes that take place in and around Riversend, all interlinked and driven by greed, violence, hate  – and hope.

Martin Scarsden’s dogged determination to find the truth has unintended consequences.  Scarsden breaks journalism rule 101 when he becomes part of the story and he has to re-examine his own role as a newspaper reporter. After a question from Mandy he asks himself: “Am I really going to sacrifice everything on the altar of journalism?”.

Scrublands is a crackerjack story, a classic whodunnit, that’s much more than a crime thriller. There’s a brilliant cast of characters from the eccentric Codger Harris to the slimy Harley Snouch; the troubled Haus-Jones; the overweight cop Herb Walker, one of Scarsden’s sources who apparently commits suicide; undercover agent Jack Goffing, who soon becomes an ally. Riversend itself is a living and integral part of the story as is the life-sized statue of a World War I soldier. Scrublands has it all: sex, murder, religion, betrayal and drugs. Excellent atmospheric writing. You can’t ask for more than that.