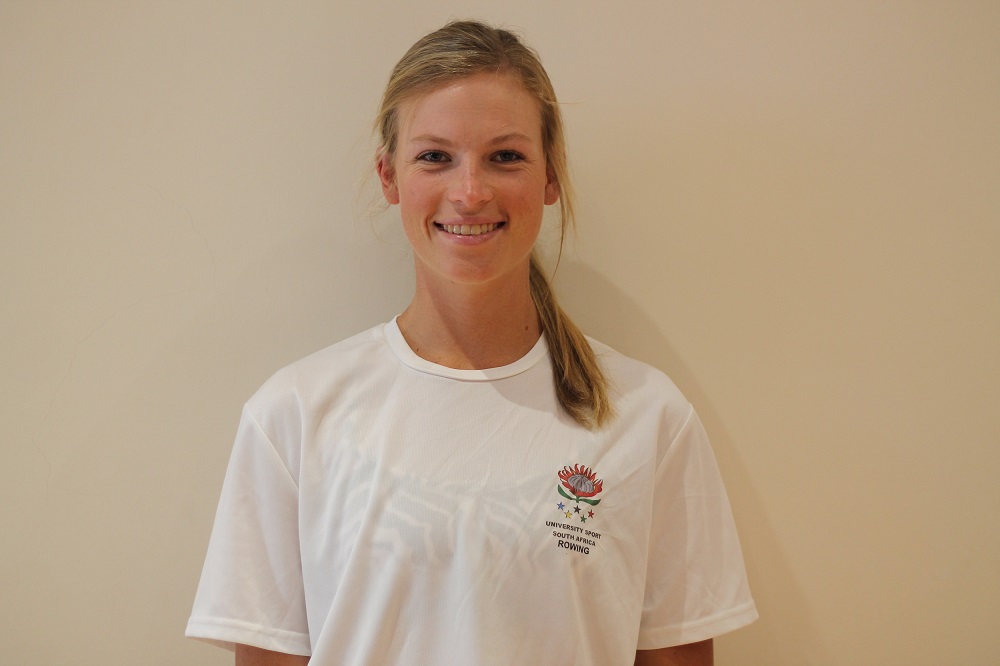 The Madibaz Rowing Club returned from the University Sport South Africa sprints regatta with its reputation firmly enhanced following some notable performances during the competition.

Leading the way was Alex Ennis, who became the first female Nelson Mandela University rower to be awarded Grudge (half) colours at a USSA event.

The event was held at the Misverstand Dam on the Berg River, near Porterville in the Western Cape, from April 5 to 7.

Having only started rowing last year, the 22-year-old Ennis said she had worked hard to move to the next level.

“I look back on 2018 as a total beginner’s year,” said the biokinetics student.

“This year I wanted to compete in the A division and work towards a goal of attending the World University Rowing Championships in 2020 or 2022, or both.”

She explained the concept of being awarded USSA rowing colours, known as Blues and Grudge.

“Blues and Grudge is the selection and racing of the top university athletes in South Africa and is extremely prestigious within varsity rowing.

“Both sweep and sculling boats are selected, with the top athletes being chosen to race in the Blues crew and the next best competing in the Grudge crew. Both crews then race each other over the sprints course.

“Blues and Grudge racing takes place after the last races on Saturday at the USSA sprints regatta.

“Selection for Blues and Grudge starts early with athletes having completed 1km and 2km ergo trials in the beginning of the year, aiming to meet predetermined cut-off times. Finally their overall performance at USSA sprints is considered by the selectors.”

Ennis added that her expectations going into the USSA tournament were unknown, having only previously competed in the novice section.

“I had never raced these experienced individuals before, so the goal was to go out and try my hardest with all the hard work I had put in beforehand and I am really glad it paid off.”

She said the team members, consisting of nine women and 11 men, were generally happy with their efforts, competing in seven finals (men) and eight finals (women).

“As the ladies’ captain I was extremely proud of my girls and their performances, especially as 70% of them are completely new to rowing.

“I have to say a big congratulations to the ladies side of the club as it was the first time since 2016 that they had nine members competing.

“This is a significant deal as the eights event is a vital race in rowing. For us to compete in it this year is a huge accomplishment for the club.”

Ennis, who lives in Providentia in Port Elizabeth, paid tribute to a strong support system for her development as a rower.

“Besides my parents who have always backed me, the biggest influence has been my coach, Mteteleli Biko,” she said.

“He has given up a lot of his own time to be out at the river each weekend to coach and has really been amazing in developing a very solid foundation for me.

“Always extremely supportive, he believes that I have the ability to go all the way. I am who I am today because of his support, hard work and dedication to me.”