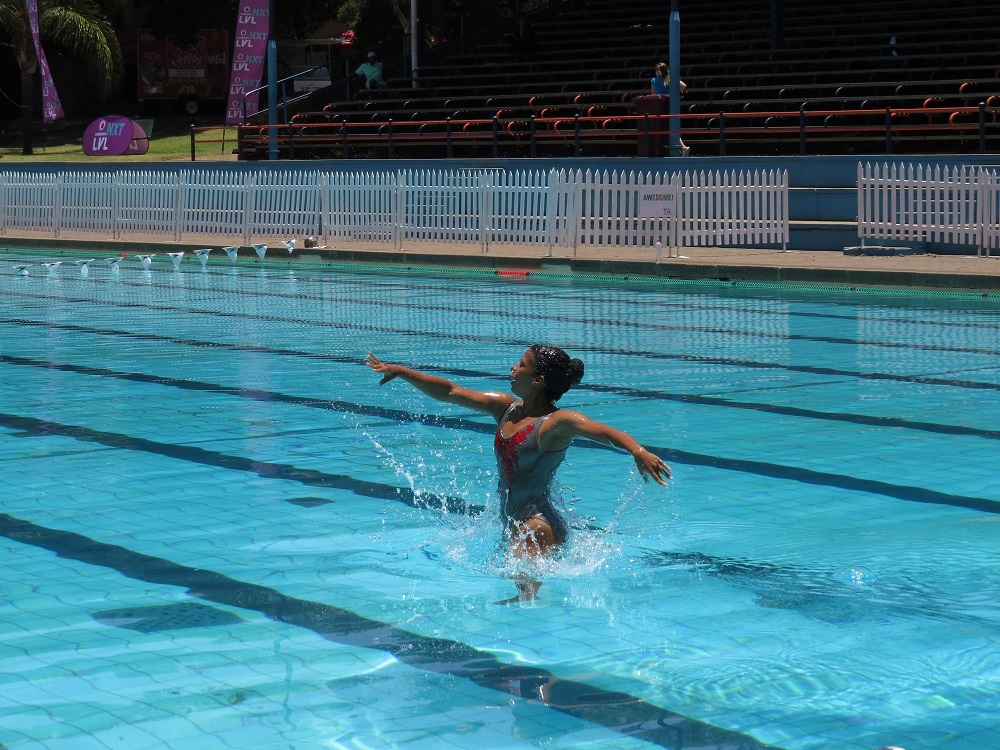 Madibaz artistic swimmer Courtney Musson continues to impress in the national arena. She returned from the national championships in Durban last week with a haul of six medals – one gold and five silvers.

The 24-year-old Nelson Mandela University student was part of the Eastern Cape artistic swimming (formerly known as synchronised swimming) team which competed in the event.

She was delighted with her results and is now waiting on tenterhooks to find out if she will be included in the South African team to compete in the World Championships to be held in South Korea in July.

“I was extremely happy with how I performed in my events, especially in my individual events,” said the human movement science masters student.

“I did, however, narrowly miss out on a gold in my technical duet event with my partner Nina Smith (from Port Elizabeth), but we were still satisfied with our silver as we have only been swimming together in this category for less than a year.”

Musson, who went to school at Erica Primary and Collegiate High, admitted to a degree of nervousness going into the championships.

“I specialise in the individual events, also known as a solo, which includes a technical solo category and free solo category,” she explained.

“The technical routines are the most difficult category for the soloist as they incorporate movements that all the athletes have to perform within their routine. We are judged on how well these movements are executed.

“The technical solo was one of my toughest routines that I had to perform at competition and previously, in December at our national club competition, I did not meet one of the criteria in the routine.

“This drove me to improve on this aspect for the national competition.”

Adding to the pressure was the possibility of making the team for the World Championships.

“The SA nationals also served as a platform for final selection for the world event,” added Musson.

“This was the second round of trials we were performing as we had our first trials in December, where I was selected as part of the SA artistic swimming squad.”

Her immediate goal is to make the national team for South Korea, which would mean a third appearance in the World Championships.

“If that happens it would be my first world competition in which I compete in the team events. At the previous champs we only performed in the individual and duet events.”

Musson acknowledged a number of people who had influenced her career since she began the sport at the age of nine.

“My biggest role model is my coach Moira Norden,” she said. “She is an amazing mentor and was one of the first people to introduce me to the sport.

“Another who played a big role in my career is my mom, Jenny. She has been through every moment with me, from the lows to the highs, as a supporter as well as a manager of my national and international teams.

“She is a brilliant support system and she has helped me strive for the higher goals in my career, even when I felt I couldn’t do it.”

Musson also recalled the impact former teammate Kerry-Beth Norden, who is working in the United Kingdom, had on her career.

“She taught me so much throughout my years of training and helped me to cope with the stress of my individual events and how to perform at an international level with confidence.

“We competed together at the World Championships in 2013 in Barcelona and in 2015 in Kazan and through these two competitions she was able to mentor me and help me improve in my sport.”

Musson’s results at the nationals were:

Solo (free and technical): second in both events

Duet (free and technical): Musson and Smith second in both events

CAPTION: Courtney Musson goes through her paces during a solo routine. The Madibaz artistic swimmer returned with a haul of six medals – five silvers and one gold – from the South African championships in Durban last week. Photo: Supplied