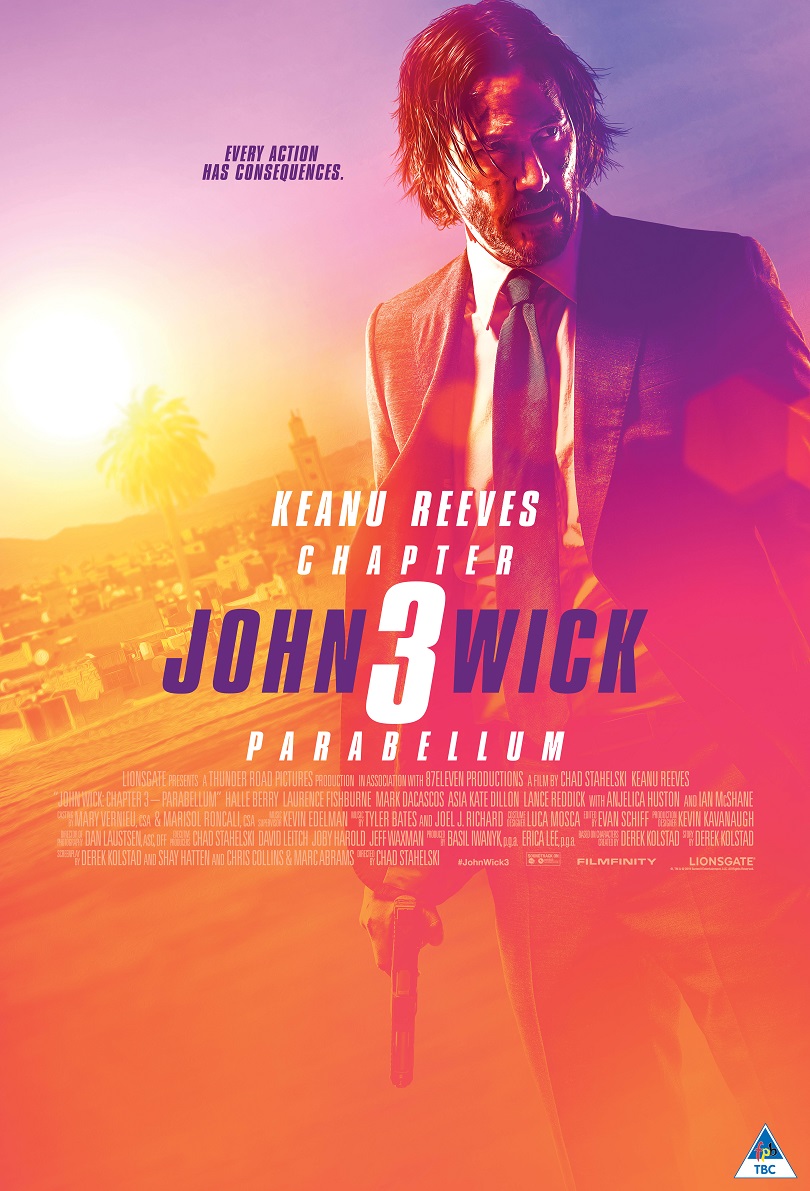 In cinema – all over the world and throughout the history of movies – we’ve come across plenty of men with guns seeking revenge or running for their lives. But we’ve never encountered anyone quite like John Wick.

The third John Wick movie, by director Chad Stahelski, is everything but a sedate stroll in the park. Even the full title, JOHN WICK: CHAPTER 3 – PARABELLUM, hints at the carnage in store. The subtitle derives from the Latin phrase Si vis pacem, para bellum, meaning, “If you want peace, prepare for war.” And, apparently, it’s war we shall have.

In this third instalment of the adrenaline-fueled franchise, Keanu Reeves returns as the eternally embattled super-assassin John Wick. At the end of John Wick: Chapter 2, he wasn’t in the best shape. “The third chapter is literally connected to second and starts with John Wick on the run,” says Reeves, who has enveloped himself in intense training to make his portrayal as realistic as possible. “It goes crazy from there.”

And he is not wrong. In JOHN WICK: CHAPTER 3 – PARABELLUM, John Wick is on the run for one seminal reason: he broke a cardinal rule by taking a life on Continental Hotel grounds and, for that, there is a $14 million open contract on his life. The victim was a member of The High Table who had ordered the open contract on Wick. He should have already been executed, but the Continental’s manager, Winston, has given him a one-hour grace period before he is “excommunicado”. With his membership revoked, banned from all services and cut off from other members, Wick must fight and kill his way out of New York City – a seemingly impossible feat with the world’s most ruthless hitmen on his tail.

The slick action flick pulls out all the stops, and Stahelski has hinted that for all the bloodshed seen in the first two instalments, we really haven’t seen anything yet. “This film ‘goes slightly north’ of the previous one with regards to body count,” he says.

“I enjoy making these movies because there’s no limit. We create our own mythology, and we have a studio that both stays out of our way and supports us on the wacky decisions. I could live here for the rest of my career. But, you know, we’re in the entertainment business. We’ll let the audience figure that out,” adds the stuntman-turned-director.

According to Stahelski, the movie will feature horses, dogs, cats, a raven, a flock of pigeons, shotguns and ninjas. Basically, just another day at the office for Wick.

Besides this strange assortment of animals – John Wick may be cinema’s most notorious dog lover and protector – Reeves won’t be alone in the threequel. Laurence Fishburne, Ian McShane, Lance Reddick and John Leguizamo are all back as The Bowery King, Continental Hotel owner Winston, Continental concierge Charon, and chop shop owner Aurelio, respectively.

There also won’t be a shortage of new assassins after Wick, with Mark Dacascos playing Zero and Jason Mantzoukas appearing as the Tick Tock Man.

In addition, Anjelica Huston has joined the cast as The Director, who will presumably work closely with The Adjudicator, played by Asia Kate Dillon. The two are members of The High Table, who are displeased that Wick killed one of their own in Chapter 2.

The most exciting new cast member, however, is Halle Berry in the role of Sofia, a fellow assassin and friend of Wick’s who risks everything to help him on his mission to escape New York City.

John Wick is the rare action franchise that is as critically praised as it is commercially viable. In an action-movie landscape where superhero movies and sci-fi epics have dominated, the success of the franchise should be commended.

With Reeves’ complex portrayal as a hurt man who just wants to live in peace with his dog, riveting action sequences and efficient world building, John Wick has become the modern mid-budget action answer to the lamentation that we no longer have decent action heroes.

The first film, a straight-up revenge flick, seemingly came out of nowhere in 2014, and prior to release was often lumped in with the “aging action star comeback” subgenre. But John Wick proved to be something more when it was released to rave reviews and made $88,8 million globally on a budget of less than $30 million. Thanks to the film’s jaw-dropping set pieces and impressive action sequences, audiences wanted to see more, and Stahelski was happy to oblige.

The 2017 sequel fleshed out the mysterious world of professional killers considerably, revealing the existence of an all-powerful council of assassins and crime lords known as The High Table. It enjoyed even bigger box office success, going on to make $171,5 million on a $40 million budget.

The franchise has garnered a passionate fan base over the last few years, and many people are excited to see Reeves return to one of his signature roles. Add screenwriter Derek Kolstad’s ability to create mounting tension, Stahelski’s kinetic action sequences, and cinematographer Dan Laustsen’s gorgeous cinematography, and JOHN WICK: CHAPTER 3 – PARABELLUM promises to be the franchise’s most successful entry yet.

JOHN WICK: CHAPTER 3 – PARABELLUM is distributed by Filmfinity (Pty) Ltd. and will be released in South African cinemas on 17 May 2019.

For more information on JOHN WICK: CHAPTER 3 – PARABELLUM, including official trailers, please visit https://www.facebook.com/nutsaboutmovies or follow us on Twitter at @NutsAboutMovies, using #JohnWick3_SA.