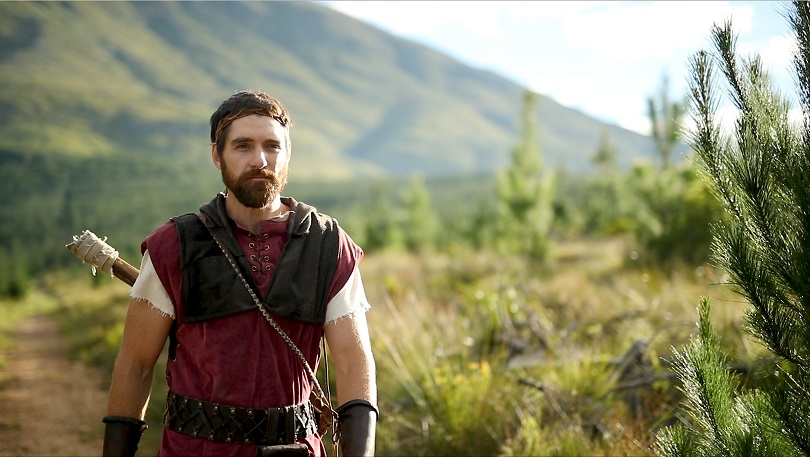 The music video of Huisgenoot Tempo- and Ghoema-acclaimed song duo, Kaleidoskoop’s, fourth single – FAKKELS – has just been released and is spreading like wildfire on social media.

It takes the audience on an epic medieval adventure that, like a fascinating short film, makes the viewer part of the message that there is light and hope in a world that often seems very dark.

“The content of the video is very much related to the song’s lyrics that is mainly about fears; especially the literal and figurative fear of the dark. We tried to portray that fear is a reality and that it has the ability to paralyze and keep us from becoming potential light bearers, but it is also something that can be overcome with the Light we choose to hold onto. The light of the lamp and torch symbolize Jesus’ light in us as humans. We can give the Light to each other and overcome the dark, but we must always be ready,” shares Anique Jordaan, the female member of the duo, about the idea behind this exceptional project which was created in association with Ubuntu Visual’s Paul Hugo and director Jannes De Villiers (with the help of his assistant, Carien de Villiers).

The video, filmed in Swellendam, is set in medieval times and the theme was inspired by movies like Robin Hood and The Village. This theme was chosen because fire and light played a major role in survival during that time. “Early in the story, three characters are introduced to the audience. Fear (Eben Groenewald) as a person from the dark and two light-bearers – one with a torch (Jouba) helping people along the way and the other (Anique) The Guardian of a lamp and the symbol of light of hope, security and the truth. Fear moves into the forest and terrorises the villagers to gain control over them, but he is purposefully heading towards The Guardian of the lamp. The Light-Bearer with the torch also moves amongst the people, but brings hope and assistance to everyone he meets – he also gives a man (played by Jouba’s father Tienie Jordaan) his flint when he helps him cross a river. Then the Light-Bearer becomes aware of Fear’s presence and realizes where he is heading. Fear tries to intimidate The Guardian of the lamp but she knows the light she has is stronger than he could ever be. The Light-Bearer arrives at the scene and remembers that he no longer has a flint to light his torch. The Guardian of the lamp throws her lamp over to him, with which he lights his torch and finally destroys Fear,” the group explains.

According to the group, the nicest part of the filming process was that friends and family could be a part of the production and that they had the opportunity to dress up in medieval costumes. Of course, filming was not without unforeseen problems, such as inclement weather and some nervous role players, but everything worked out well and the duo is grateful for everyone’s help. “Swellendam is Jouba’s hometown and there were plenty of friends and family to serve as extras. Anique’s grade seven maths teacher built her lamp, Jouba made his torch himself and his mother made many of the extras’ clothes as well as his outfit,” they share. Thanks to this amazing team effort, the end result turned out to be perfect. This video will make fans fall in love with the group all over again.

Just like the beautiful colours and shapes of a kaleidoscope manages to captivate its audience, this talented acoustic pair – with the same name – has succeeded in conquering the hearts of music lovers, across the country, over the past twelve years. The group is also part of the MUSIEK SOOS GROND movement which promises magnificent music shows and will showcase some of the most gripping music and talent ever seen in South Africa!

They will be sharing the stage with their friends Joshua na die Reën, Len Muller, Leon Gropp, Lizandra Winter and Liani Reynolds at the planned concerts. The musicians will be sharing some of their own material and will also be doing some remarkable collaborations.

Doors will open at 17h00 and close at 22h00. Guests are welcome to bring along their picnic blankets, camping chairs or pillows to sit on while enjoying this spectacular event.

Tickets will be available from www.musieksoosgrond.co.za and prices will range between R200 and R250 per person.

FAKKELS also features on the studio album, Gunsteling Seisoen, which was released in March 2017 and won a Ghoema Music Award for Best Album By A Group / Duo in 2018. This album is a celebration of the group’s successful decade in the music industry and has produced several radio hits across the country.