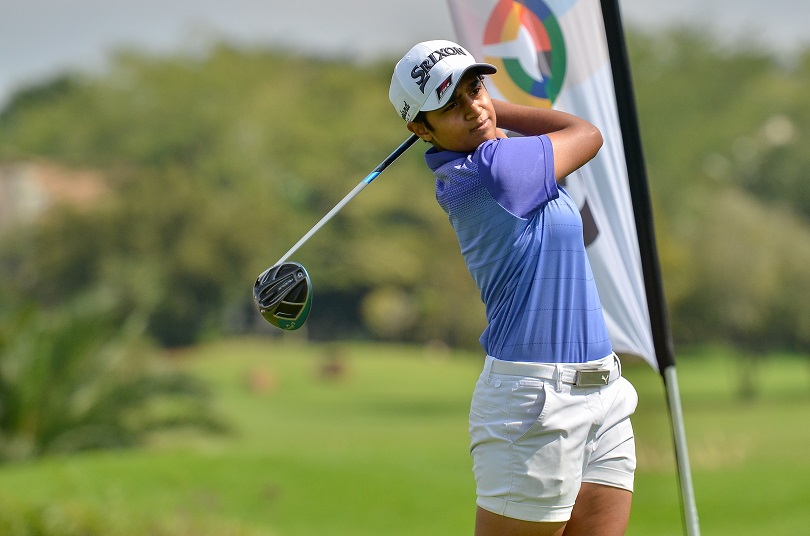 The pair capitalised in the score-able conditions with rounds of two-under 70 set the first round target at the Woodhill Residential Estate and Country Club.

Macnab hit the front first with a birdie at the par three second.

“I hit 9-iron to eight feet at the second, but after the first birdie, the putts stayed out,” said the 17-year-old Serengeti junior.

Her next birdie putt dropped at the ninth and she made a great up-and-down for birdie at 11 to move to three-under.

“I was bogey-free until the 16th where I made a silly double,” Macnab said. “I chunked it in the water with a pitching wedge. I rescued myself with a great chip, but I missed the putt. It was a soft double, really. I went for the green in two at the 17 and bounced back with a good birdie.

“I hit a 5-iron off the tee and left myself 189 metres to the pin. The ball didn’t turn over enough, though and I came up just short of the green, but I chipped it close and made the putt.

“Overall, the putting was really good, but I was just slow off the mark. I missed a few setters on the front nine – a few two to three metre putts – but I made the putts that counted to keep the round going. Looking forward to a great tussle with Kajal tomorrow.”

Mistry was on the back foot after a bogey at the short second, but the GolfRSA Elite Squad member took advantage of the second par five (fifth) to get back to even-par.

She got within a shot of the lead with back-to-back birdies at eight and nine, but gave another shot back to the field at the par five 11th hole.

“I hit sand-wedge into the eighth and holed a five metre putt,” said the 18-year-old Ernie Els and Fancourt Foundation member. “At the ninth, I had 62 metres to the pin and I hit a lob-wedge to six feet. The 11th hole was bizarre.

“My drive went a bit right and I tried to punch out of the rough with a 3-iron. I only managed to move the ball three metres. I gave my third shot everything I had and again, the ball only moved 10 metres. I still had 196 metres to the green, so I hit 4-iron and two-putted for bogey.

“The 15th is a drivable par four, but I decided to lay up with a 5-iron and left myself exactly 80 metres to the pin. I hit it pin-high right and boxed a short putt for birdie to get back to two-under. I had a really great ball-striking day. I only missed three greens and one was by an inch.

“The course is in stunning condition, but we did have to adjust to some pretty windy conditions in the morning. Overall it was a fun day, though. The greens here are quite fast, but we all struggled a little to get the lines right. That will improve, though, as the tournament goes on.

“Cat and I have played a lot of golf against each other and we often play social golf, so I’m looking forward to the second round.”

Macnab and Mistry lead by one shot from Womens Golf South Africa’s Most Improved Junior for 2018/2019, Megan Streicher from Swellendam.

Reigning South African Women’s Mid-Amateur champion Liezl Smit served up one of the early surprises when she grabbed a share of the eight-way tie on four-over.

The rest of the players rounding out the top 10 include Stephanie Barbaglia; Marine Legentil; Danielle Bekker and Zane Naude.

Meanwhile Kayla Paulsen from Western Province carded an 87 to take the lead in the B-Division.

First Round Scores – A Division

First Round Scores – B Division

PHOTO: Caitlyn Macnab from Serengeti Estates and Randpark’s Kajal Mistry opened up a one-shot lead in the first round of the South African Women’s Amateur Stroke Play at the Woodhill Residential Estate and Country Club; credit Ernest Blignault.