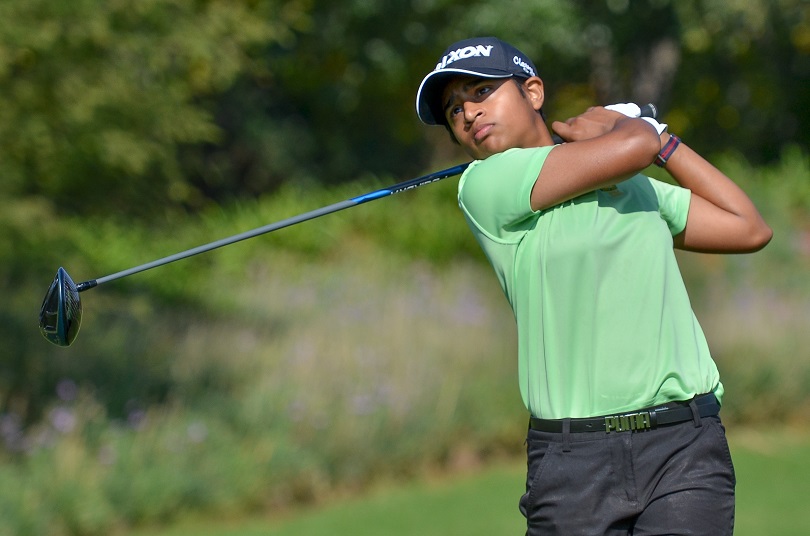 PRETORIA, 29 April 2019 – Kajal Mistry has given herself chance to claim a second victory in the South African Women’s Amateur Stroke Play Championship when she snatched pole position on moving day.

A bogey-free five-under 67 was a real statement of intent from the Ernie Els and Fancourt Foundation member and, as the dust settled at Woodhill Residential Estate and Country Club on Monday, the former champion finished well ahead of the chasing pack.

Mistry leads the field on seven-under 137 and just as she did in 2017 at The Wanderers Golf Club, she has opened up a yawning gap on the chasing pack.

Fellow GolfRSA National Squad member Symone Henriques reeled in a pair of birdies at 12 and 13 and had another brace of gains at 16 and 17. A great approach into the closing hole to set up a final birdie saw her match Mistry’s low round of the day, but she will start the final round four shots off the pace.

“It feels like someone has hit the repeat button,” said Henriques.

“Two years ago, Kajal took a five shot lead into the final round, but Woo-Jo (Son) and I chased hard and we almost caught her. It’s a big ask at this tough course, but I’m going to be positive and give it my best shot. Again.

“My ball striking today was on song and I putted really well, so hopefully I can keep the momentum going to make it an interesting final round.”

Joint overnight leader Caitlyn Macnab battled a balky putter and carded 74. The country’s number one ranked amateur will start the last round on level par in joint third with Boland rising star Megan Streicher, who birdied the final hole for a round of 73.

Mistry burst from the blocks with back-to-back birdies at the 10th and 11th holes and notched further gains at 14 and 17 to turn four under.

“The tee shot on the first hole was straight into the sun, so I couldn’t see where I hit it, but my Reece (Hackney), my caddie, assured me we were fine,” said Mistry. “It ended up being just on the right side of the fairway.

“I had 82 metres to the flag and I hit a nice, knock-down sand-wedge to give. The par five didn’t treat me too well in the first round, but today it went a bit better. I hit a 3-iron in, but finished just short of the green and I hit a really bad chip…almost duffed it, but at least it ran up a bit and I sunk a three metre putt for the birdie.

“After the turn, it was all about staying patient on the back nine. You want to protect your score after doing all the hard work, so I just hit fairways and greens and made some pars to keep the round going. At the fifth, my tee shot went a little bit left.

“The fairway is so narrow, though, it didn’t matter too much. It ran through the rough and I had a really good lie. I hit 5-iron to the green and I hit it close. I had about four metres for eagle. I got a good read off Caitlyn’s eagle putt, but I just took too much break. It was nice to tap in for birdie, though.”

Two years ago, Mistry had to clamp down on the nerves over the closing stretch at the Wanderers to beat Henriques and Son for the biggest win of her career.

During her recent stint on the Sunshine Ladies Tour, the former number one amateur showed big match temperament beyond her years. Not only did she enjoy two runner-up finishes and two top 10s, but she finished the season fourth overall on the Investec Property Fund Order of Merit.

“I definitely learned a lot from playing against the pros, and especially how to keep strong mentally and to stay in the moment,” she said.

“I think it’s going to be a great final round. Symone and I are best friends and we know each other really well. We know how to play for each other and we know when to put the friendship aside. You can’t control what the other players do, so my strategy will be very simple. I’ll only be thinking about the next shot until the last putt drops.”

Overnight leader Kayla Paulsen also held on to pole position in the B-Division.

The Western Province golfer will start the final round on 28 over after rounds of 87 and 85, with a seven stroke lead over Kamaya Moodliar from KwaZulu-Natal and Gauteng North’s Jutta Tecklenburg.

Second Round Scores – A Division

Second Round Scores – B Division

PHOTO: Former champion Kajal Mistry from Randpark will take a four-shot lead into the final round of the South African Women’s Amateur Stroke Play at the Woodhill Residential Estate and Country Club; credit Ernest Blignault.