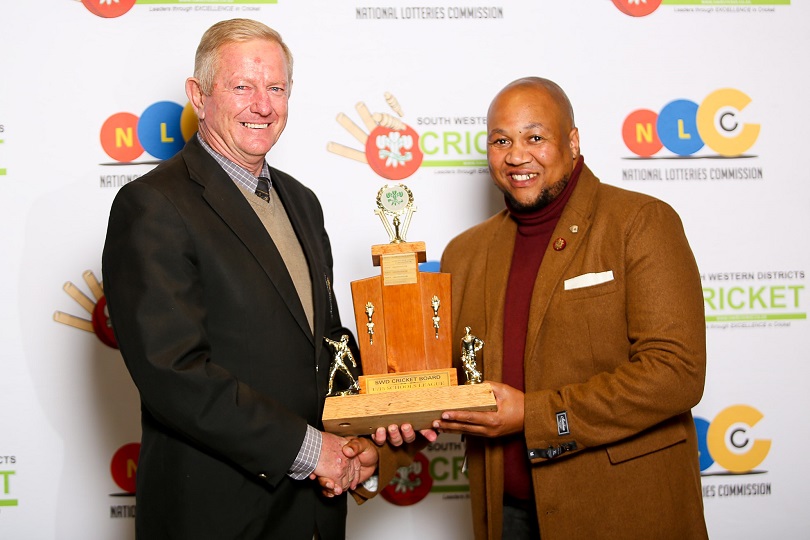 Outeniqua High School from George confirmed their dominance at school’s cricket in the province when they won the U-19- and U-15 Super League titles.

They won the U-15 title for the second consecutive year.  Langenhoven Gymnasium from Oudtshoorn won the U/19 Coca Cola Twenty 20 title but they failed to qualify for the national competition.  Oakdale U-19B was victorious in the U-19 Promotion league while Outeniqua U-15B  confirmed their dominance as they also wrap-up the U15-Promotion League.

Langenhoven Gymnasium defeated the Bridgton Regional Performance Centre (RPC) in the T20 final. In a low-scoring match the RPC posted 62 with Julian Jacobs (2/12) Langenhoven’s most successful bowler.  Gymnasium surpassed the target (63/5) in the 19th over for a 5 wicket victory.  Thirty-eight schools participated in this popular competition.  Although runners-up the Bridgton RPC made history to become the first RPC in the country to reach the finals.

Jhedli van Briesies, from Langenhoven Gymnasium, who scored a total of 276 runs with a highest score of 78* was the top batsman in the T20 competition whilst Basil George from Sao Bras Secondary School who took 12 wickets with the best figures of 5/10 was the top bowler in this competition.

Chris Fourie (198 runs), from Outeniqua, was the top batsman in the U-15 Super League and Basil George (D’Almeida Hub) who claimed the most wickets in the league – 17 wickets – with a best bowling analysis of 5/38 the top bowler in the league.

In the U-19 Super League, van Briesies, was again the outstanding batsman and scored a total of 323 runs with a highest score of 143. His team mate from Langenhoven Gymnasium, Eaj Carew, claimed the accolade as bowler of the season when he took 21 wickets with the best figures of 5/9.

At the national cricket tournaments of CSA the SWD representative schools teams produced satisfactory performances thanks to an inspiring performance by the U-17 provincial team.  A good individual performance by van Briesies in the Coca Cola T20 franchise qualifiers was rewarded with an inclusion in the Coca Cola All Stars team.  It was however the SWD U/16 Regional Performance team that excelled when they recorded three out of four victories at the Standard Bank U/16 CSA National Cricket Week that took place in Potchefstroom during April 2018.  The only defeat was against Western Province (in the final).  Geon Burns (as captain) and Chumani Mangqwengqwe was selected for SA U/16 RPC team.

The SWD Regional Performance Centre and Hubs team excelled at the Standard Bank National U/16 week that was held in Potchefstroom. The team that was selected from players from the Bridgton Regional Performance Centre and Rosemoore-, D’ Almeida- and Thembalethu Hubs won three out of their four matches – including an impressive victory against Gauteng.  On the last day they narrowly lost against Western Province in the final.

Geon Burns from D’Almeida Hub (as captain) and Chumani Mangqwengqwe from Thembalethu Hub was also included in the National RPC team that was selected upon completion of the competition.

Van Briesies was the SWD High Schools player of the season, Zander Nel (Outeniqua Primary) who excelled with outstanding versatile performances at the CSA U-13 National Week, the Primary School’s cricketer of the year and Annerie Dercksen (Sentraal High School) who was selected for the SA Schools Girl’s U/19 was the Girl’s Schools cricketer of the season after she received the same award since 2015.

The headmaster, Mr. Christo Vorster, receives the trophy as Super League winners from Mr. Andrew Jantjies (Non-Independent Director) at the SWD Cricket Annual Awards function that was held on Friday.