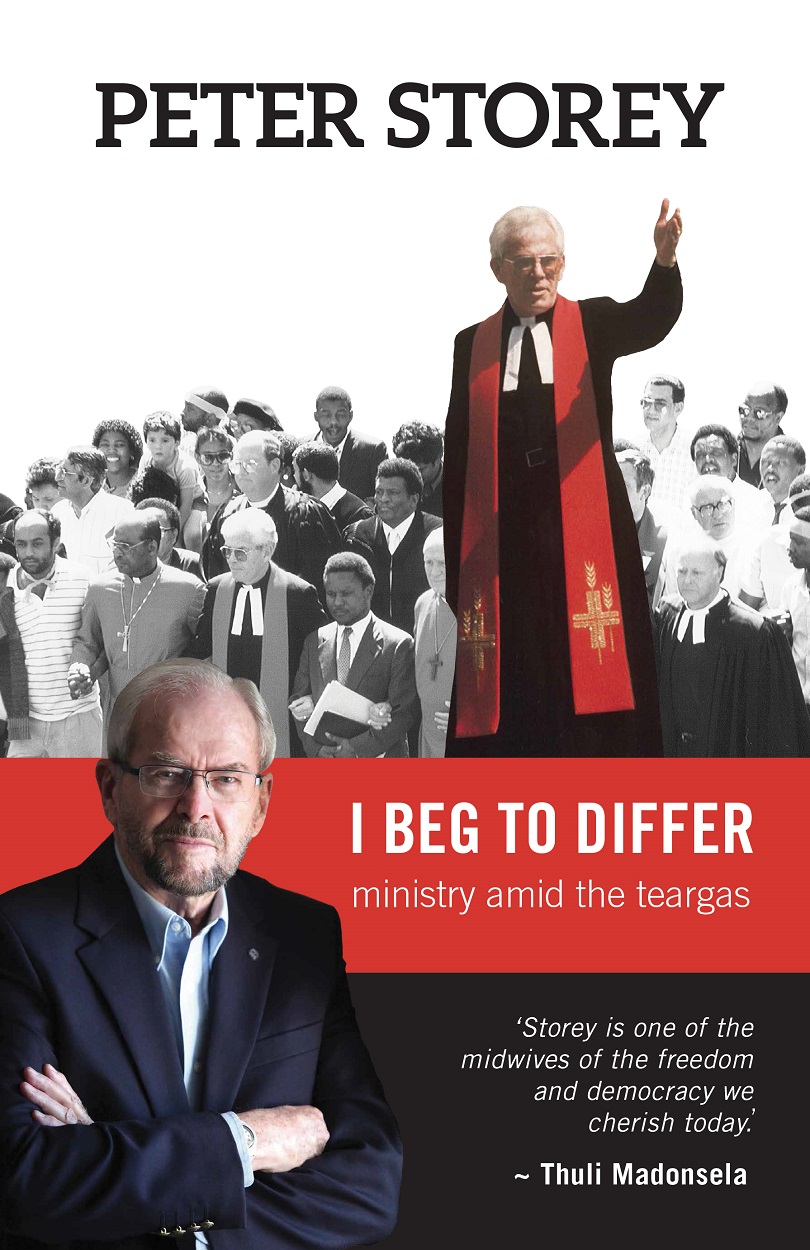 Ministry Amid  The Teargas

The Reverend Peter Storey has always been a man on a mission and a man with a mission. In March last year he made his feelings known when he put up a banner on the steeple of the Central Methodist Mission in Cape Town stating that, “Jesus was the first to decriminalise sex work. John 8:7”, the day after activists and members of the church lobbied in Parliament against the decriminalisation of sex work.

Never one to shy away from controversy, Storey, the former bishop of the South African Methodist Church and the leader of the South African Council of Churches, was in the thick of things during the Struggle. Storey was also involved in the Winnie Mandela United  Football Club, where the “Mother of the Nation” was implicated in the death of Stompie Seipie. The members didn’t play much football, writes Storey; they were Winnie’s enforcers, did her every bidding and aped the security branch  in their brutality. Later it emerged that a security branch informant, Jerry Richardson, was responsible for the death of the 14-year-old activist who was known as “The General” in Soweto. Storey was the Reverend Paul Verryn’s superior who was a central figure in the Club. Storey also helped to rescue three boys who were held hostage and seriously assaulted at Winnie Madikezela’s home in Orlando. The Truth and Reconciliation Commission (TRC) gave her a two year suspended sentence for her part in the “football club”. She never forgave the TRC for suspecting her of Seipei’s murder. There was a curtain of silence around the “football club” and although Storey moved in and out of Soweto regularly he was unaware of its activities. In July 1988 when the house in Vilakazi Street burned down he went to offer Winnie his sympathy. There was no-one at the charred ruin  “but over the road an old man was watching me, I said, this is so evil. The system never stops persecuting her. Bishop, he said, this was not the system, it was the boys from the school who did this to punish the Football Team for raping a schoolgirl from there”. That’s another strand to the narrative of the Winnie Mandela United Football Club, but there’s more which you can read in I Beg To Differ, which sheds a lot more light on Winnie and the company she kept.

I Beg To Differ is also a microcosm of South Africa’s history.

Storey’s awakening to the injustices of the apartheid system came when he was a nine-year-old schoolboy when his father was the “Governor” of the Kilnerton Institute, where hundreds of Africans came to be taught by good and wise men. However, one day his whole world changed; his father explained that change had come to the land, there would be a new government consisting of Afrikaners who had no love for English speakers, and a different way of treating Africans. There had been an election and the Nationalists had won. It was May 1948 and the young Storey knew that the world he knew was no more.

Even today Kilnerton is not well known to the average South African but many people speak of it with the same reverence that they do Healdtown, Clarkebury in the Eastern Cape, Moroka at Thaba’Nchu and Indaleni, all Methodist institutions. Among the famous Kilnertonians were Struggle stalwart Lillian Ngoyi, one of the leaders of the women’s march against the hated dompas, singer Miriam Makeba and Dikgang Moseneke who became the Deputy Chief Justice of the new South Africa in 1994.

Storey recalls his schooling in Cape Town at Rondebosch Boys and how he met Elizabeth who was to become his wife for 54 years. His analysis of that time is brutally honest, and he gives Elizabeth the credit for bearing the burden of parenting. Times were tough in the Storey family as he earned a stipend and not a salary and when Elizabeth went back to work the extra income came in handy.

But times were not normal and as the “political struggles ramped up I was frequently an absentee husband and father”. Instead of watching his sons play rugby Storey would be at mass funeral “in a township somewhere”.

Storey’s story covers the whole gamut of the South African experience from his time in the Navy when Afrikaans speakers were made “blitzoffisiere” – lightning officers and promoted above seasoned veterans in a bid to dilute the Englishness of the organisation. As the first Methodist chaplain assigned to Robben Island, he ministered to among others, Robert Sobukwe; Nelson Mandela (who had two stints there); Walter Sisulu, and interestingly, Stanley Mogoba, a young PAC activist who had studied and taught at the Kilnerton Institute, and was president of the PAC from 1996 to 2003; Govan Mbeki and Ahmed Kathrada, to name a few.

District Six also features prominently in I Beg To Differ and some of his anecdotes are heart-breaking , especially about his lay preacher who couldn’t find his “new” matchbox house on the Cape Flats to where he had been forcibly removed. “It was the destruction of community solidarity that broke hearts,” writes Storey.

Another interesting anecdote, and there are many, was when Dr Fazel Randera, a TRC commissioner, asked whether the Central Methodist Mission (CMM) would host the hearing in Johannesburg. Storey protested that the hall wouldn’t be big enough. But the TRC wanted the church and it was for Storey,  “affirmation that the church exists, not for itself, but for the world”. Other incidents that are highlighted in the book include the Khotso House bombing; the Chris Hani murder and Storey ponders what South Africa would have been like today if Hani had lived.

Encounters in the Public Square records Storey’s first meeting, along with other church leaders, with former Prime Minister, PW Botha.  It wasn’t a fruitful encounter but more genuine conversations had taken place that day than in the past 30 years, Storey writes.

The Security Branch also became part of the Storey family’s lives.  One of their sons couldn’t understand why letters from his girlfriend seemed to arrive once a week. The mailman told him they had to wait for Special Branch to read the letters before they could be delivered and this was only done on a Wednesday. On another occasion Storey was having a long conversation with Presiding Bishop Khoza Mgojo when a voice broke in, saying, “Ag, julle twee praat kak!”. But there were also anonymous calls and death threats.

Storey was the founder of Life Line SA and Gun Free South Africa and a founder member of the National Peace Accord that helped the first democratic elections run smoothly. He also had a stint as “an amateur journo” when he worked with activist Hugh Lewin, who died a few months ago, on the Rhodes student newspaper, Rhodeo, and he edited Christian Impact with the help of well-respected journalist Tony Weaver. Storey also edited Dimension and one of the stories resulted in the Methodist Church of South Africa being declared an undesirable organisation in the Transkei Bantustan.

After a two-year stint with his wife and family preaching in Australia in 1964 they decided to return to South Africa when Mandela had been jailed for life.

In his Epilogue Storey makes the point that the struggle continues, whether for the hearts and minds of men and women, or in national and religious institutions. Always it is about bringing our individual or corporate consciences into conformity of God’s dream of a world of compassion and justice.

Images include one of Storey holding a plaque, known as The Plaque of Conscience, the first memorial anywhere in South Africa to the shame of apartheid. You can see it at the District Six museum which used to be the Buitenkant Street Methodist Church.

I Beg To Differ is a gripping read about the turbulent times in South Africa and a welcome addition to the annals of the Struggle.