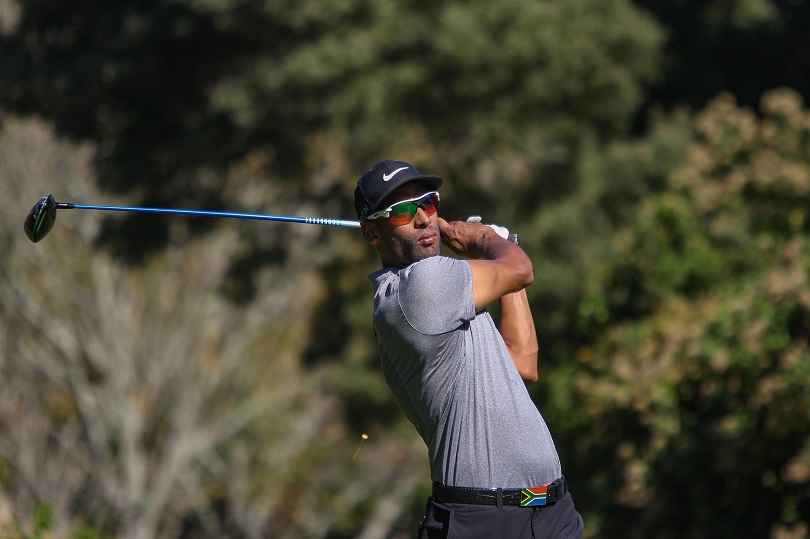 BENONI, 30 April 2019 – Western Province golfer Shaun le Roux seized the initiative on day one of the South African Mid-Amateur Championship, posting a level par 72 to edge into the lead on a tough scoring day at Ebotse Golf and Country Estate.

The Westlake golfer has a slender one shot advantage over in-form past champions Derek Scullard from KwaZulu-Natal and Gerlou Roux from Western Province.

Le Roux’s playing partner Neil Homann from Gauteng birdied the 18th hole to grab a share of second and Alex van Heerden from Gauteng North made it a four-way tie on one-over when he also pencilled a four on his card at the par five closing hole.

Gauteng’s Shaun Stapleton – another former champion – finished in the bus at two-over alongside 10 other players, including Ekurhuleni trio Morne Nel, Jayson O’Reilly and Rowan du Preez.

Le Roux was the only player to post a flawless loop on the Links layout in the windy conditions.

He fired nine straight pars before holing his first birdie putt at the par four 10th, but gave it straight back at the next hole. He lost two more shots to the field with a double bogey at the par four 13th, but a brace of birdies at 14 and 18 saw him set the clubhouse target on level par.

Roux, the only player with back-to-back victories in the flagship event, arrived in Ekurhuleni buoyed by his third victory of the season in the Free State Mid-Amateur Open on Sunday.

The Bellville golfer had a stumbling start with a double bogey at the second, but steadied the ship with a birdie at the fourth. He took advantage of the par five 12th to draw level with Le Roux, but a late bogey at 17 dropped him back to joint second.

Scullard, who won the 2018 edition with a six shot margin at Plettenberg Bay Country Club, also showed some good form at Maccauvlei on the weekend and coming off a tie for third, the Mount Edgecombe golfer offset bogeys at two, five and 14 with a brace of gains at 15 and 18 to keep his title hopes alive.

Homann from Bryanston Country Club birdied three of the par fives – five, 12 and 18 – and Wingate Park’s Van Heerden mixed three bogeys with birdies at eight and 18.

Although the bulk of the field battled to put red numbers on their cards, at least four players had something to smile about on a tough day at the office.

Ernest Botha from Benoni Country Club sandwiched an eagle at the par five seventh between a pair of birdies and the four shots helped him to sign for a four-over 76, while Stapleton from Wanderers, Chris Zietsman from Ermelo Golf Club and Kyalami’s Robert Westray all made threes at the par five 12th.

The 93-player field will be cut to 65 and ties for the final two rounds and the cut currently sits around the plus-9 mark.