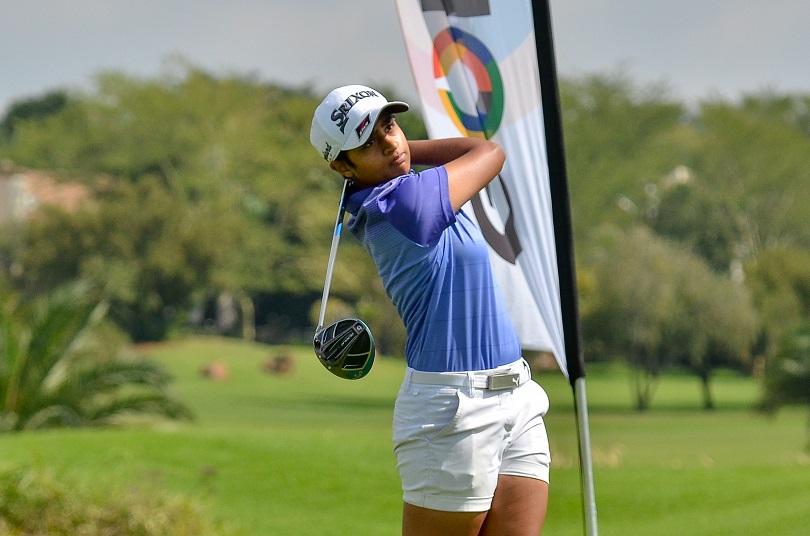 PRETORIA, 2 May 2019 – Kajal Mistry has her eyes on the prize after reaching the final in the South African Women’s Amateur Championship final on Thursday.

The Randpark golfer has tried to win both premier women’s amateur events since she triumphed in the SA Women’s Stroke Play Championship in 2017.

Both her previous attempts were thwarted, but after lifting the Stroke Play title for a second time at Woodhill Residential Estate and Country Club on Tuesday, the 18-year-old raised her game.

The opportunity to realise a life-long goal and make women’s amateur golf history is within her grasp.

Mistry will attempt to become only the eighth amateur to achieve the calendar double – and the first to do so since Kim Williams in 2010 – when she faces fellow GolfRSA Elite Squad member Kaylah Williams in Friday’s final round.

She cruised to the quarterfinals, and beat fellow Ernie Els and Fancourt Foundation member Larissa du Preez 4 & 3 to reach the top four.

Mistry faced Kiera Floyd from Ekurhuleni in the semi-final and immediately piled on the pressure with a birdie-birdie start. She was 3-up after five, but lost the sixth with a bogey. The GolfRSA Elite Squad pair halved the eighth in birdies, but Mistry went 5-up after 15-year-old Floyd bogeyed 11 and 12 and dropped two shots at the par four 13th.

The Ebotse junior had a chance to fight back when Mistry bogeyed 14 and doubled the 15, but she dropped a shot at 15 and lost the match with final bogey at the par three 16th.

“Winning the double is the ultimate goal, but I’m putting it right at the back of my mind,” said Bryanston resident. “You should always expect a tough match, because there is no such thing as an easy match. I’ve never gone head-to-head with Kaylah and she also had four good wins. She will be just as hungry to win as I am.”

The Western Province junior faced Boland junior Megan Streicher in the final four. Streicher knocked out defending champion Jordan Rothman to advance to the quarterfinal, where she took down South Africa’s number one ranked Caitlyn Macnab 1-up.

“I will try to start strong to put pressure on Kaylah, but she will be want to do the same, so I think it will come down to whose putter runs hot,” said Mistry. “Match Play is so tricky, because you don’t get do-overs. The key tomorrow will be to take it shot-for-shot and hole-for-hole.”

Williams from Durbanville Golf Club made a fast start against Streicher and reeled in three birdies in her first four holes to go 3-up.

“I started exactly the way I hoped to and put some pressure on Megan, but when I missed a one metre putt for birdie at the par five fifth it really rattled me,” said reigning Nomads SA Girls Rose Bowl champion.

“She won the fifth and sunk a birdie putt from nowhere at the eight to cut the lead to one shot, but then she dropped the ninth and I turned 1-up. I hit a 4-iron at 11 from 200 metres out and it landed pin high. Megan lagged her first putt close, and I holed the eagle putt to go 3-up.

“Then I three-putted at 12 and 13 from eight feet, and it shook me again. I just buckled down and told myself to focus and to commit to the putts. I took an extra second every time and made four solid pars to win the match 1-up.

“I am not expecting an easy final against Kajal, because she is playing great golf at the moment. The beauty of match play is that it can go either way, so I will try to stay in my own zone and play my own game and hopefully put some pressure on her early on.”

The Flight Division title fight is also promising to be a tense affair.

GolfRSA Talent Identification Squad member Pheletso Mota mowed down Eva Magala from Uganda 7 & 5 in their semi-final before she beat defending champion Lizzie Currie 5 & 4 in the semi-final.