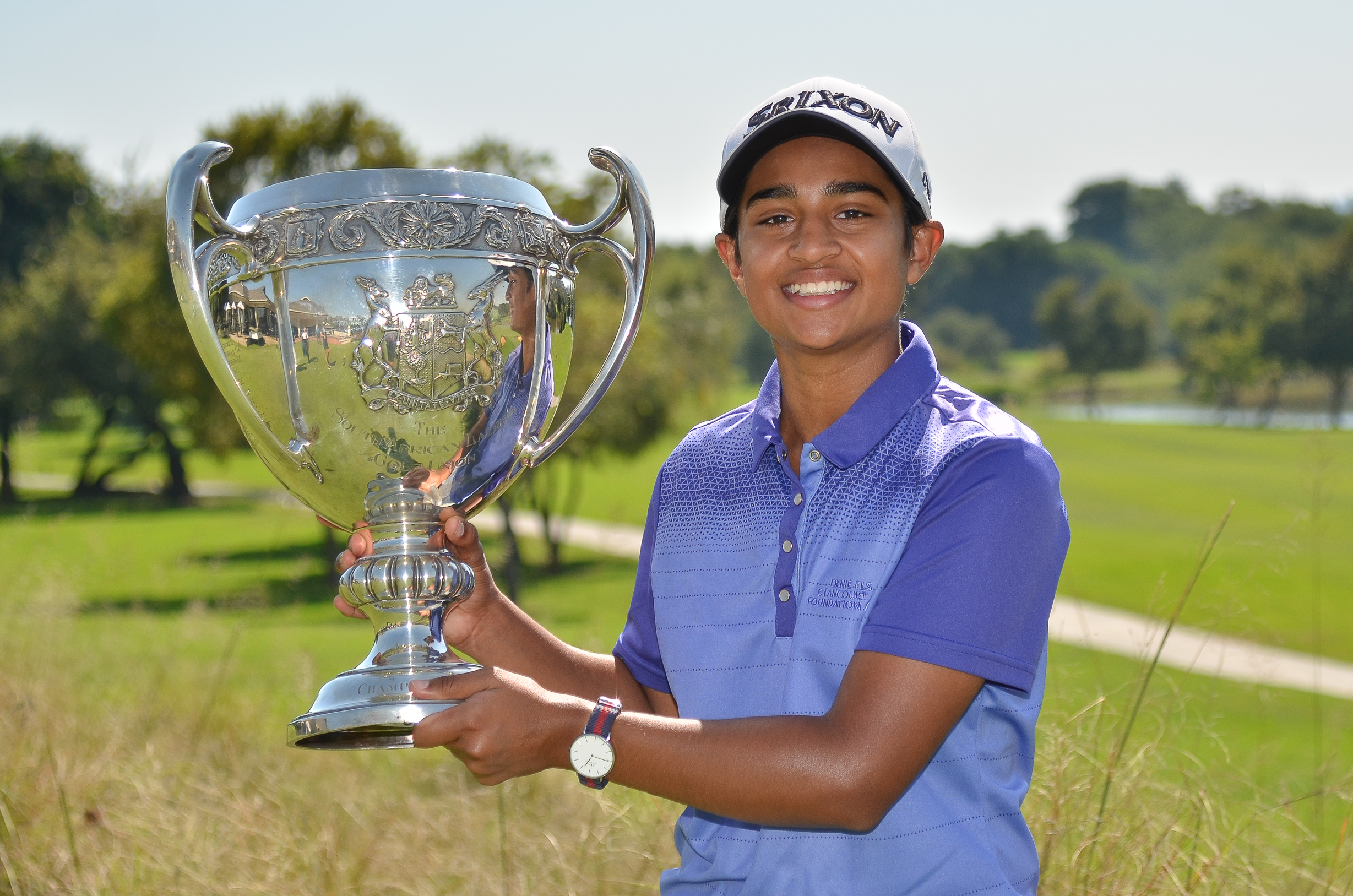 PRETORIA, 3 May 2019 – Kajal Mistry produced the prize-winning shots when it mattered most to claim a historic South African amateur women’s ‘double crown’ at Woodhill Residential Estate and Country Club on Friday.

It took a bit more work than she anticipated, but a mere three days after she won the SA Women’s Stroke Play Championship for a second time, the 18-year-old GolfRSA Elite Squad member defeated Kaylah Williams at the 20th hole to lift the SA Women’s Amateur Championship title.

Mistry’s incredible achievement put her on a short and very exclusive list of women who have claimed the calendar double in the two premier events.

In the 50 years since the SA Women’s Stroke Play Championship was introduced, just seven women have accomplished this rare feat.

Hugging the SA Women’s Amateur trophy – which dates back to 1906 – Mistry could barely contain her delight.

“It’s been such an amazing week. I was trying to do my best to win both tournaments and scoop the double, but far and away, holding this trophy right now is the best feeling ever.”

Seeded first in the 32-player field that lined up in the match play event, she sailed through the first two rounds on Wednesday, routing Bobbi Brown from Western Province 6 & 5 in the morning and eliminating Emily Jones from Zimbabwe by the same margin in the afternoon session.

She kept her title hopes alive with two decisive victories on Thursday when she knocked out Larissa du Preez from Gauteng North 4 & 3 in the quarter-finals and beat Ekurhuleni junior Kiera Floyd 4 & 2 in the semi-finals.

She defeated fellow Western Province golfer Vicky Traut 6 & 5 in round one, and reached the top eighth with a 5 & 3 result against Eleonora Galletti from Gauteng. The Durbanville golfer beat Symone Henriques from Gauteng 4 & 3 in the quarterfinals and birdied the 18th hole to win her semi-final match against Boland junior Megan Streicher 1-up.

“I hit 5-iron just over the green, hit a not-so-great chip to three metres and drained the putt,” said Mistry. “We halved the next two holes in pars, and I won the eighth after I hit a lob-wedge out of the rough right on the green and two-putted for birdie.

“Kaylah was on the green in two at 11 and birdied the hole to level the match and she went 1-up on 13 with a par. I hit a good bunker shot, but it ran out and I couldn’t save par.”

Williams piled on the pressure with a chip-in birdie at the par four 15th, but when she dropped at the next hole, Mistry saw her chance to pounce.

“I stayed patient and I felt composed throughout the round. When I saw that Kaylah was getting nervous after the bogey, I knew I could win if I piled on some pressure as we got closer to the 18th. I won 16 with a par after she left herself with an impossible chip.

“I knew I would birdie the par five, but things didn’t exactly go to plan. I hit my drive left and couldn’t go for the green, so I laid up with a 7-iron. I had 56 metres to the flag and I hit a lob-wedge that ran five metres past. I had to make the putt to square and I drained it.”

The pair halved the 18th hole in pars and Mistry felt confident going into extra holes while Williams’ inexperience started to show.

“We halved the 19th hole in birdies,” Mistry said. “On the second, I hit a grip-down 8-iron straight at the flag. Kaylah also hit a good shot. We both finished pin high right, but I eight feet from the flag and she had a three metre putt.

“She actually hit a really good putt, but just too hard. As I was standing over the putt, I had such a strange experience. I could hear my sister Ruja’s voice in my head, telling me to ‘put it in’. I felt so confident over that putt and I boxed it.

“That’s never happened before, but it felt so good watching that putt drop.”

Mistry dominated the Open and Junior Amateur rankings in 2016 and 2017, but golf had to take a back seat as she completed matric last year. She accepted a golf scholarship at the University of Arkansas, but before heading to the United States in August, the Bryanston resident set herself a couple of goals.

Break back into the top 10 in the Womens Golf South Africa Open Amateur rankings. Finish in the top five on the Sunshine Ladies Tour’s Investec Property Fund Order of Merit. Win the SA Women’s Amateur double.

“I can’t believe I’ve ticked all the boxes,” Mistry said.

“I’ve worked really hard with my coach Darren Witter on fine-tuning my game and he deserves credit for helping me achieve the goals we set.

“I still can’t believe that I’ve done it. I’m so incredibly proud. I can’t wait to see my name go on the trophy. This week has given me a huge confidence boost and I am incredibly grateful for all the support from GolfRSA, Womens Golf South Africa, Gauteng Ladies Golf and the Ernie Els and Fancourt Foundation, who have been amazing.

“I want to dedicate this week to my family and thank them for their unconditional love and support. To them, I’m always a winner and they never allow me to doubt myself, whether my game is at a high or a low. They are my heroes.”

PHOTO – GolfRSA Elite Squad member Kajal Mistry from Bryanston achieved the rare calendar double when she beat Kaylah Williams on the 20th hole to lift the SA Women’s Amateur Championship title on the back of her wire-to-wire five stroke victory in the SA Women’s Stroke Championship at Woodhill Residential Estate and Country Club; credit Ernest Blignault.