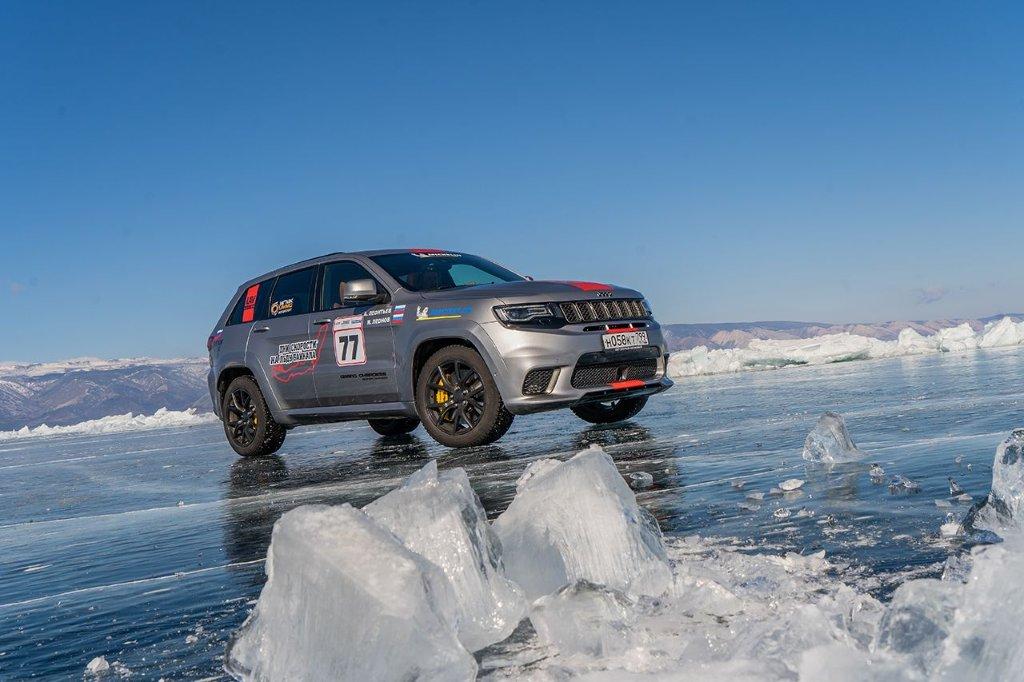 The Jeep Grand Cherokee Trackhawk backs up its claim as the most powerful mass-produced SUV in the world. Under the bonnet is a 710hp 6.2-litre V8 engine. Despite its impressive dimensions, the Trackhawk reaches 100 km/h in just 3.7 seconds, with a maximum speed of 290 km/h.

Participation in this event means a serious load on the braking system due to the specifics of the Baikal ice. In sunlight, the surface of the lake is covered in a film of water, which reduces grip on the surface. However, even in such conditions, the Grand Cherokee Trackhawk demonstrated excellent results when braking thanks to its Brembo brake system, which uses large front brakes.

Traction was granted by the Jeep Quadra-Trac on-demand four-wheel-drive system, which includes an electronic limited-slip rear differential and a single-speed active transfer case, and the Selec-Track system with five dynamic modes – Auto, Sport, Track, Snow and Tow –  which allows for the driver to choose a vehicle setting that ideally meets any requirement and ambient conditions including ice driving.

Before the race, unnecessary items were removed from the Grand Cherokee Trackhawk and it was checked that the fuel level was sufficient.

All the runs were conducted in line with the regulations of the Russian Fédération Internationale de l’Automobile (FIA). The maximum average speed was counted over a distance of 1 km with a rolling start; the drivers had to cover 1 km in the middle of the track at the maximum possible speed and 1 km from a standing start. The rules also dictated that the timing gates needed to be passed in both directions, with the judges calculating the average result. To allow for the required acceleration and braking, the total length of the course was 12 km.

Additionally, the absolute maximum speed achieved in each run was included in the official Book of Records of Russia.

The Speed Days on the Baikal Ice festival were first held in 2011. Over eight years, more than 20 speed records have been set on the Baikal ice in different categories of vehicles. All runs are traditionally conducted on natural bare ice and preparation of the route is limited to the removal of obstacles (packed snow, hummocks) affecting safety for drivers and judges.

CAPTION; The SUV achieved a speed of 280km/h. Picture: Quickpic