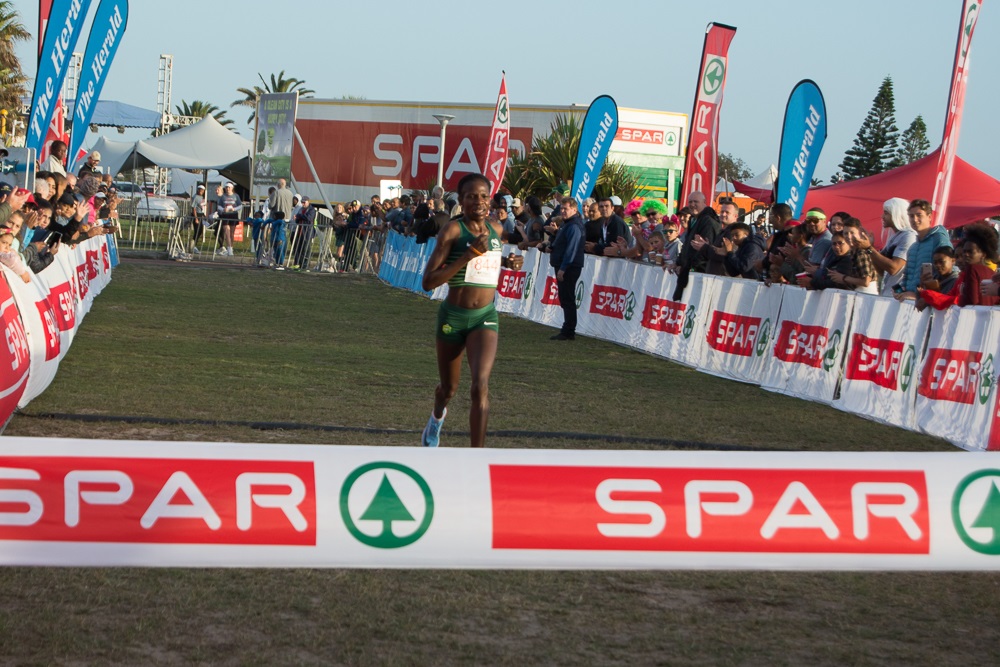 Thousands of women converged on the Summerstrand beachfront for the annual road-running extravaganza which saw Nedbank’s Johannes set one of the fastest routes in the country alight with a time of 31 minutes 50 seconds.

She was followed home by the talented 17-year-old Ethiopian Tadu Teshome Nare, also Nedbank, in 32:38, with two-time defending champion Kesa Molotsane, of Murray & Roberts, third in 33:09.

Breaking away at the 7km mark, the 38-year-old Johannes piled on the pressure in the final kilometres as she realised she was on course to better her personal best of 32:28.

The victory, she said at the post-race media conference, came as a surprise considering the strong competition in the race.

“The weather was perfect and I enjoyed the race, but I was not expecting to win in this fashion,” said Johannes, whose time was also the new Namibian record for the distance.

“There was very good competition and everyone is fit, but I just went out there and ran my best, so I am happy with the outcome.”

Despite losing her crown and finishing only third on the podium, Molotsane, from Bloemfontein, said she welcomed the strong competition provided by several international runners.

“I really want to welcome them to our beautiful country and we are very happy to have them running against us and helping us to raise the standard of the competition,” she said.

“It is good to have this challenge and for us to try to keep improving our running across the board.”

Johannes, who won the Two Oceans half-marathon last month, has now taken the first step towards the Grand Prix title, which continues with the next event in Cape Town on May 26.

While the elite runners thrilled the big crowd at the beachfront, there was boundless enthusiasm among the 7 000 women – and some men in drag – who enjoyed the 10km and 5km events.

Veeroni Naidoo, from Broadwood in Port Elizabeth, said she initially had no intention of running the 10km, but was “forced to do so by a colleague”.

Now, she added, she would definitely be back for more next year.

“Ironically, my colleague fell ill and was unable to run, but I ended up loving the 10km race, having done the 5km previously,” said Naidoo.

“It was not as bad or gruelling as I thought it would be and I ended up doing my best time for a 10km event. It felt like such an accomplishment and I will definitely be back next year.”

Some travelled from further afield, such as Nolubabalo Ngxesha, who came all the way from Whittlesea, near Queenstown, to join in the fun.

“I am just a fun-runner and struggling with my weight, so that is my motivation for running,” she said.

“This was my first time in PE and I really did enjoy the spirit and the vibe.

“The fact that I can finish 10km is a real achievement and I also like to support the charity that SPAR has for the race.”

This year the sponsors have the Sanitary Sistas as the beneficiary, assisting the Businesswomen’s Association of South Africa in their initiative to provide sanitary products to teenage girls.

Lizaan Pieterse, from Mount Croix, said it was a chance to have “loads of fun” with her friends.

“It’s such fun to do a race like this because everyone is cheering you on and there is an amazing spirit,” she said.

“It was great weather and this is my second SPAR race. I improved my time from last year and will definitely be back next year.”

“What a race it was, and to have such an array of top-class talent was really good for Port Elizabeth,” he said. “I think it brought out the best in all the athletes, with a great time and a great spirit among all the runners.”

He did not forget the rest of the entrants.

“To have thousands of runners out here celebrating the beauty, the power and the joy of being a woman is fantastic. The camaraderie you see just makes this such a wonderful event.”

With Zisa the STOP Plastic campaign mascot entertaining the crowds at the start, Stapleton said they wanted to remind people of this initiative.

“It all kicked off last year and we really want to encourage people to think about their use of plastic and to make sure they recycle to combat this threat to our environment.”