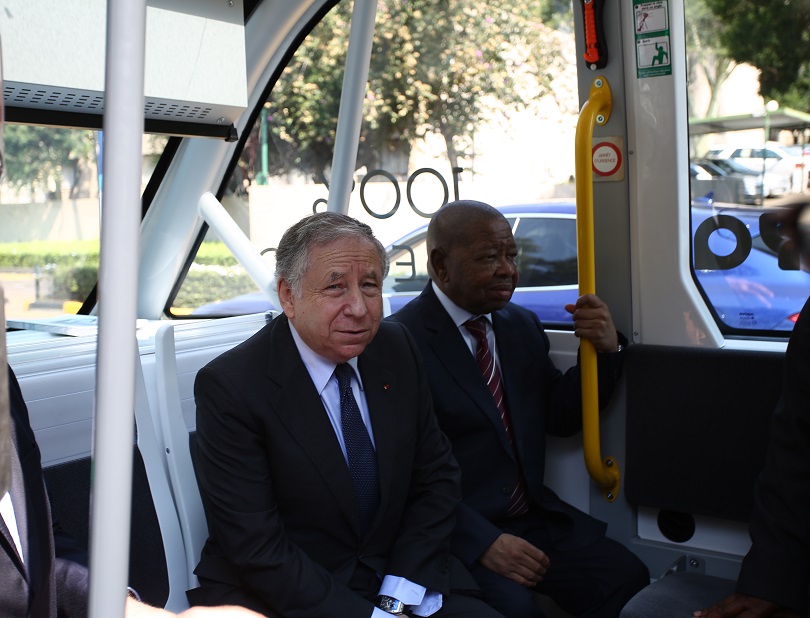 Brian Joss – “I am excited by the gradual shift to electronic modes of transport. We need to look to the future to obtain solutions for the present. With some foresight, we might be able to save government billions in the long run, as well as conserving our future.”

With these words, Transport Minister Blade Nzimande opened the 2019 Fédération Internationale de l’Automobile (FIA) Conference on Monday, 29 April. The Conference is being held in South Africa for the first time at the invitation of the Automobile Association of South Africa (AASA), with the support of Motorsport South Africa (MSA).

The joint Mobility and Sport Conferences – which brings together close to 500 delegates from 117 different countries – is held under theme “Stronger Together”, and signifies the unity between mobility and sport within the FIA and member countries. The event takes place in conjunction with the FIA Region 1 Spring Meeting and FIA Sport Regional Congress, and is being held in Africa for the time in the FIA’s history.

During his visit to the conference at Sun City in the North West province, Minister Nzimande and the President of the FIA, Mr Jean Todt, took the opportunity to travel on the Navya Autonomous Electric Shuttle, the first autonomous, driverless, fully electric, commercially available vehicle to be demonstrated in South Africa.

Autonomous transport technologies have the potential to change the act of driving and the perception of mobility. The FIA has long acknowledged the benefits these could bring to revolutionise transport systems, making them cleaner, safer, and more accessible, especially in urban areas.

By proposing the Navya Electric Autonomous Shuttle service to the attendees of the FIA Conference 2019, the Federation asserts its commitment to accompany its Member Clubs, and all road users, in the journey towards the adoption of driverless vehicles. The launch event was the occasion to highlight the opportunities and challenges of these innovations, the necessity to develop and monitor independent trials in real conditions to build user confidence, and the regulatory changes required for these new vehicles to safely transition to the road.

This demonstration in South Africa is one of the first trials on the African continent where the road mortality rate is almost 50 percent higher than the world average, and 85 to 95 percent of the fleet is made of used vehicles.

FIA President Jean Todt welcomed the initiative and encouraged authorities to adopt strategies for automation to address these mobility challenges.

“Autonomous transport can have an important impact in tackling some of the pressing issues that local and regional authorities are facing, particularly in the areas of road safety, congestion and air quality. While there is much potential behind this new technology, understanding the effect it will have, and how it can be best deployed, is an important step to ensure informed and appropriate decisions are taken. I am pleased to see that the FIA Conference offers an interesting opportunity for South African authorities to test automated transport technologies and identify potential use cases for their cities, in line with sustainable urban mobility objectives”, he said.

With neither a steering wheel nor pedals, the Navya Autonomous Electric Shuttle uses effective guidance and detection systems that combine various types of advanced technology. Data from sensors, cameras, GPS and odometry is merged and interpreted by deep learning programmes on-board the vehicle. Through this technology, the Navya Autonomous Electric Shuttle moves about efficiently, and makes proficient decisions without any driver.

“There are huge challenges in terms of mobility in our country and, certainly, this demonstration shows us what is out there right now. It may not necessarily be technology which will be implemented throughout South Africa tomorrow, but it is shining a light on where we think we need to be going. Given the problems on our roads and the lack of reliable, affordable public transport, we need to be looking at innovative developments such as those offered by the Navya Autonomous Electric Shuttle, which can provide answers,” said Mr Sikkie Kajee, chairman of the AASA.

A short video of the Navya Autonomous Electric Shuttle at Sun City is available at https://protect-za.mimecast.com/s/gRgMCQ1LzwFPXzotxgJZ0

CAPTION: FIA President, Mr Jean Todt (left), and South African Minister of Transport, Dr Blade Nzimande, during the inaugural trip on the autonomous, fully electric Navya Shuttle, demonstrated for the first time at Sun City on Monday, 29 April. The Navya Autonomous Electric Shuttle will allow delegates to commute between the different venues for the duration of the Conference, which ends on Friday.