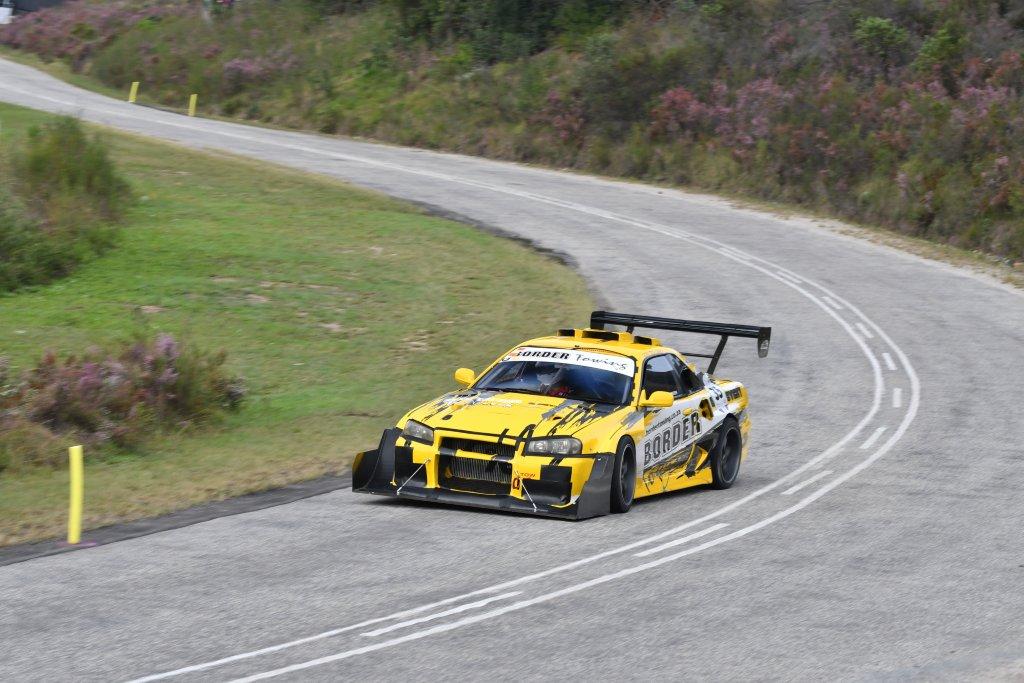 Brian Joss – The 10th edition of the Jaguar Simola Hillclimb crowned a new King of the Hill champion and saw the reign of two others extended with a thrilling finale at South Africa’s premier motorsport lifestyle event.

The biggest news of the day was Franco Scribante taking his first King of the Hill title in the extremely competitive Modified Saloon Car category, powering his radical 2016 Nissan GT-R to a new Class B record time of 39.274 seconds. He ousted 2018 winner Wilhelm Baard who had to settle for second place in the final Top 10 Shootout.

“It was an interesting King of the Hill as it was getting dark for the Top 10 finale and we had a misfire that developed in the final run, but it all came together and the entire team is so happy to take this victory after working extremely hard to get the car ready for the Hillclimb,” Scribante stated.

In the Single Seater and Sportscar category, Andre Bezuidenhout fought off a strong challenge from Robert Wolk (2009 A1 GP Ferrari) to secure his third win a row. He powered the specialist Gould GR55 Hillclimb car to a winning time of 36.764 seconds – with his outright record of 35.528 seconds remaining unbeaten due to much cooler conditions this year.

It was a similar story for Reghard Roets who made it a hat-trick of victories in the Road Car and Supercar category, after slashing his 2018 time by 0.8 seconds to set a new Class A record of 44.094 seconds in his Nissan GT-R.

Over 17 000 spectators attended the 2019 Jaguar Simola Hillclimb over the three exhilarating days of Hillclimb action. The event was also livestreamed to viewers around the world via the www.jaguarsimolahillclimb.com and www.Motorsport.TV websites, with more than 225 000 views over the weekend.

Scribante’s outlandish Nissan GT-R was purpose-built for this year’s Hillclimb, and it was one of the major attractions due to its radical World Time Attack-derived aerodynamics and around 1 200 kW of power reportedly on tap.

And his performance was as memorable as the car itself, obliterating the opposition with a best qualifying time of 38.551 seconds. Second fastest was Martin van Zummeren in his wild 2002 Nissan Skyline GT-R on 40.732 seconds, followed by Franco di Matteo 0.191 seconds adrift in his 2000 Jaguar V8 Supercar.

The challenge from reigning champion Wilhelm Baard never really materialised as his extensively reworked GT-R suffered a series of technical issues and he was ultimately well off the pace on 43.941 seconds, thus not making it through to the Class Finals. Scribante took the Class B5 victory with a time of 39.274 seconds – a new Hillclimb class record 0.189 seconds quicker than Baard’s 2018 time.

In the do-or-die Top 10 Shootout which was concluded as the last glimmers of sunlight disappeared, Scribante was simply in a class of his own and comfortably took an extremely popular King of the Hill victory with a peerless run of 39.342 seconds – recording an average speed of 173.86 km/h from a standing start.

Baard gave it his all but had to settle for the runner-up spot in the final reckoning, just over a second slower after literally lighting up the 1.9 km Simola Hill with sparks flying from under his car’s ground-hugging aerodynamics as the Nissan blasted up the course.

Di Matteo continued his impressive form and was rewarded with third place after crossing the line in 40.828 seconds – just three hundredths ahead of Mitchell.

The combination of experienced gentleman racer Andre Bezuidenhout and the specialised Gould GR55 proved unbeatable yet again in Class C for Single Seaters and Sportscars.

It was clear from the outset that Robert Wolk was doing everything he could to close the significant gap to Bezuidenhout from last year, but the Ferrari-powered 2009 A1 GP car just wasn’t quite up to the task. After qualifying runs, Bezuidenhout had stopped the clocks on 35.778 seconds with a margin of 0.77 seconds over his young rival.

The gap increased to 1.03 seconds in the Class Finals, with Bezuidenhout taking the Class C2 victory with a time of 36.537 seconds over the A1 GP car, while Chris Knez ended third in the roaring 1968 McLaren M10B Formula 5000 car (47.093 seconds) which provided a stark and fascinating contrast to its contemporary challengers.

With the track and ambient temperatures having dropped significantly for the final Top 10 Shootout, Bezuidenhout wasn’t able to close in on his 2018 record time of 35.528 seconds, ending up 1.2 seconds slower – but it was still enough to secure his third consecutive Class C King of the Hill title, achieving an average speed of 186.052 km/h.

“That was very tough as it was getting dark towards the end, and it was very tight between Robert and I in the end,” Bezuidenhout said. “I had hoped to break my record today, but the drop in temperatures made it impossible and our focus was on taking the win. The event was fantastic as always, and already I am looking forward to next year.”

Although he had to contend with some gear selection problems during several of his runs, Wolk had no issues in the Top 10 Shootout, and came to within 0.156 seconds of the winning time – a truly impressive effort that gave him second overall. Garth de Villiers produced a sterling performance to conclude his weekend in third place, crossing the line in 41.743 seconds in his 2002 Formula VW car.

Reghard Roets joined the exclusive club of three-time Jaguar Simola Hillclimb winners after not only dominating the event’s time sheets in Class A throughout the two days, but wrapping up the King of the Hill Top 10 Shootout with a new record time of 44.094 seconds in his bright yellow Nissan GT-R.

“I thought that I overcooked it at the end as the car got very out of shape, but I held it to the finish and I’m very happy,” an elated Roets said. “The Jaguar Simola Hillclimb is the best weekend motorsport spectacle without a doubt, and every year it gets bigger and better. I’ll be on a high the whole year and can’t wait for the 2020 event!”

The completely standard, showroom-specification Jaguar F-TYPE SVR Coupés of the Cronje brothers kept the fans enthralled over the two days of King of the Hill, with Mark holding a 0.4-second advantage over his younger sibling following the qualifying sessions. However, Gavin pipped him to the number one spot by 0.3 seconds in the Class Finals to take the A7 win with a time of 49.096 seconds.

The younger Cronje also earned the runner-up position in the Top 10 Shootout, finishing 0.9 seconds ahead of Gennaro Bonafede (2019 BMW M2 Competition). Mark Cronje landed up 10th in the final run after posting a time of 46.940 and incurring a further 2-second penalty for clipping a track marker.

The other intriguing tussle was between three local racing legends in a trio of brand new Jaguar I-PACE EV400 electric vehicles. Mike Briggs earned the bragging rights after powering his way to a very competitive time of 50.124 seconds, finishing 0.485 seconds ahead of Deon Joubert in the Class Finals, with Shaun Watson-Smith ending a whisker off the two front-runners.

For the 2019 King of the Hill, the award went to Martin van Zummeren, who completed his fifth Jaguar Simola Hillclimb this year. He led a trio of wild ear-piercing Nissan Skyline GT-Rs that were crowd favourites throughout the event, with the other two cars driven by sons Wade and Jody.

Follow all the highlights of the 2019 Jaguar Simola Hillclimb on social media using the hashtag: #JaguarSHC