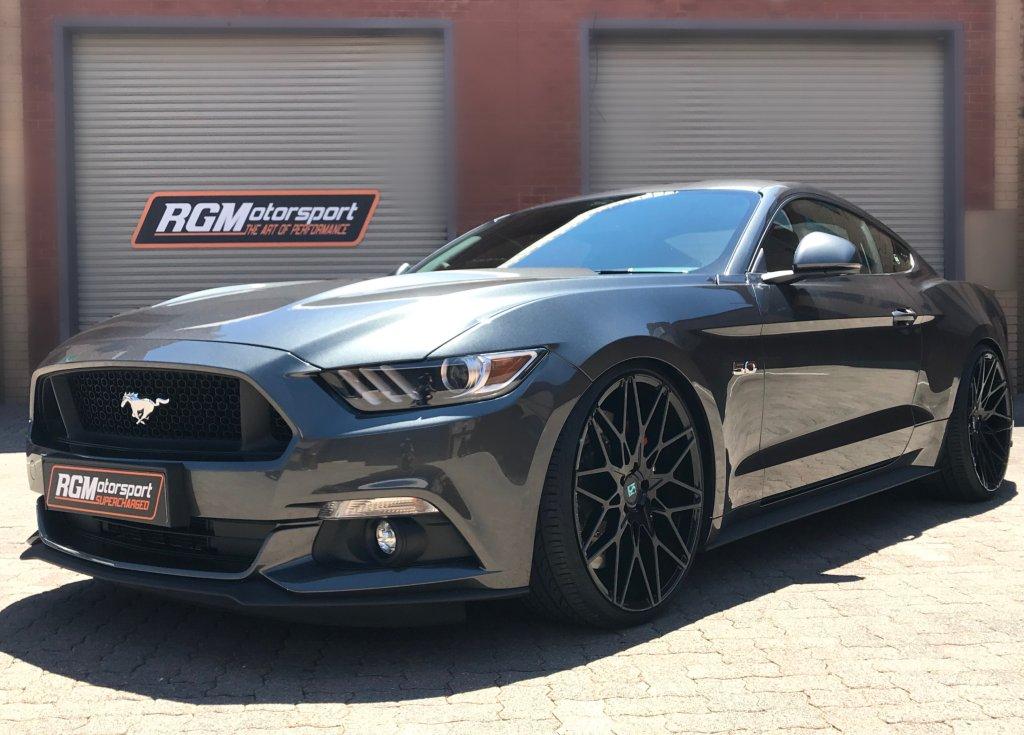 One lucky customer collected the supercharged, 5.4-litre V8 ,  one of the most powerful street-legal cars yet  built by RGM. The numbers gleaned from the RGM dyno were achieved with a 7 500 revs/min limit imposed until the engine is run in fully, after which 8 200 revs/min will be at the driver’s disposal. Phase Two will see the nitrous oxide injection activated!

The brief from the owner was – at face value – straightforward: build a street-legal car that can get into the nine-second bracket over a quarter-mile and if necessary be driven home afterwards. That’s quite an ask – but one which the RGMotorsport team met with their usual enthusiasm.

With the customer wanting the best of everything, RGM tapped into a global network to ensure his wishes were met.

Starting from the bottom and working upwards, the engine room crew opted for a Boundary Racing oil pump, stroker crankshaft with an ATI damper pulley on the end of it, Eagle con rods, Cometic head gaskets, PAC valve springs, Ferrea valves and Comp Cams camshafts. ARP fasteners are used throughout and the re-sleeved block is topped by gas-flowed heads and finished off with custom valve covers.

Perched above it all is a Whipple positive displacement blower with Stage 3 Competition Kit, driven from the crankshaft by a heavy-duty 10-ribbed belt.

The blower itself is rated at 2,9 litres (which means for each revolution it can cram just under 3000cc into the engine), forcing compressed air through an integrated intercooler. Maximum boost is currently 1.25 Bar, which along with a static compression ratio of 9.8:1, means that there are eight rather large explosions for every two crankshaft revolutions.

When it comes to the management of the “bangs”, the stock engine management system is overwritten by a Lund Racing map, created specifically for this car and optimised by RGM. In fact, there are two maps: one for normal pump fuel and another for when the dragstrip beckons. Then the tank is drained via a quick release system and a 95 percent ethanol – E95 – mix substituted.

A sophisticated, three-stage Fore fuel system with triple pumps takes it from the tank to the engine, and Injector Dynamics 1700cc injectors feed it in.

There’s also water-methanol injection and – once again with quick quarter-mile times in mind -nitrous injection, which can be precisely controlled and is the secret to getting an extra few hundred horses unleashed at exactly the right moment. Finally, a 76mm Techniflow (RGMotorsport’s propriety exhaust brand), dual-tone outlet system with ceramic-coated manifolds releases the gases.

No doubt there may be some raised eyebrows as to how all this finds its way along the drivetrain and to the rear tyres.

Well, the buying spree didn’t stop at the back of the crankshaft and while the six-speed auto is stock, it benefits from the substitution of various key items. A Circle D 245mm torque convertor takes the place of the standard one and an uprated input shaft has been added.

At the back of the trannie a QA1 carbon fibre prop shaft (rated to 2 000 horses) takes over, handing over to a new differential with a Torsen limited slip mechanism and a shorter – 3.7:1 versus 3.5:1 – Ford Performance crownwheel and pinion. All good so far! Exiting the diff, all those horses becomes the responsibility of Driveshaft Shop half-shafts, which like the prop shaft are also good for 2 000 horsepower, or roughly 1 500kW.

For road use the car wears a set of 22-inch wheels shod with a 285/25 and 245/30 rear/front combo. For drag use it’ll wear 17-inch slicks and safety upgrades will extend to a parachute and a six-point rollcage will be added.

There’s more. Keeping it all pointing in the right direction at launch and down the strip will be important. RGMotorsport has opted for Steeda accessories to uprate the handling: there’s Stop The Hop hardware on the rear axle, a roll centre/bumpsteer correction kit on the front and adjustable anti-roll bars at both ends. Dampers have been uprated with a KW Variant 3 coilover kit.

With 10-piston Vari calipers and matched discs replacing the stock front items (rears are unchanged due to the necessity to run 17-inch rear wheels on occasion) stopping should pose no problem, though on the strip the parachute will be a necessity rather than a luxury.

Many other details have contributed to the complexity of the project. For example, fuel and gearbox coolers have been added, and the engine oil cooling system uprated to cope.  Rear seating has been completely removed and the front pair replaced with proper race seats and harnesses – essential hardware for a car with 1 267 horsepower at the flywheel.

For the owner of this rather special car, every day is going to be a celebration of International Mustang Day.

CAPTION: Big build Mustang: a herd of horses under the hood. Picture: Motorpress