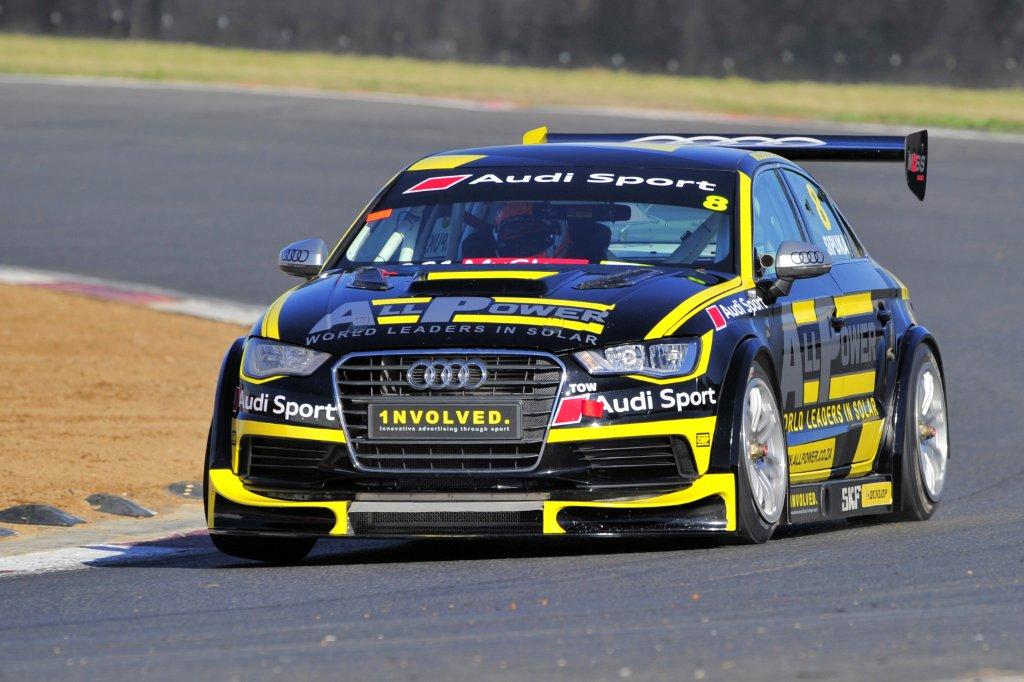 Brian Joss – Deep rooted respect within the All Power Audi team saved the weekend for championship leader Simon Moss, in Cape Town at the third round of the 2019 Global Touring Car Championship (GTC).

It all seemed business as usual for the All Power Audi team when the first practice session was completed at Killarney International Raceway on Friday,

10 May. Simon Moss clocked the fastest time with Tschops Sipuka in fifth. It would be the last session before the Audi team were put to the test. In practice two, it was Moss who had a gearing issue with his race vehicle which prevented him from a solid run. Things got worse when Sipuka’s engine failed in the same session. His day then came to an  instant halt as the team needed to replace the engine on his Audi race vehicle.

After a long Friday evening, the team returned to the 3.2 kilometre Killarney Raceway on Saturday morning with high hopes of a great race day.

With a fresh engine in Sipuka’s vehicle, the team were ready for an early qualifying – only to find out that Moss’s vehicle refused to fire up. With the race vehicle fully working before a short nights rest, the team were caught by surprise and it was only Sipuka who managed to go out in time for qualifying.

The All Power Audi team engineers worked on the double to figure out the technical issues with Moss’s vehicle, but to no gain. With the increasing likelihood of him missing the opening race, Sipuka stepped up to the plate with a gracious solution to team principle, Terry Moss. Sipuka offered his Audi race vehicle to Moss to ensure his championship hopes had an opportunity of being fulfilled. After much consideration and discussion, Moss humbly accepted the keys to the number 8 Audi race vehicle.

With no qualifying time behind his name, Moss lined up last on the grid for the opening 12 lap race. When the lights turned green, it was clear that he felt comfortable in his borrowed drive and executed a very mature performance. Gradually and without any unnecessary risks, Moss worked his way up the ranks and finished the first race in third position and scored 14 points.

In between the two races, Moss’s number 38 Audi race vehicle still didn’t show any sign of life and he returned for the second heat in Sipuka’s Audi.

Starting from fourth on the grid, Moss showed why he is the major title contender in 2019 by winning the second race of the day. His second heat was flawlessly executed with solid, well planned and safe overtakes.

With his win, Simon Moss extended his 2019 GTC lead by 12 points and Tschops Sipuka was most probably the proudest person within the team, content that his offering paid off massively in the end.

“I have to take my hat off to Tschops” Terry Moss, Team Principal explained after the race in Cape Town. “He’s been in the game for a long time and he is a true sportsman for giving his car to Simon to save the championship for him. It takes a real man to do that and I sincerely appreciate what he’s done for the team. It also shows how high the team spirit is and how positive the relationships are within the Audi team. It’s an old solid marriage, and we can be very proud and happy with how the weekend had turned out.”

The fourth round of the 2019 GTC championship will take place at the home track of the All Power Audi team at Aldo Scribante in Port Elizabeth on 14 and 15 June.