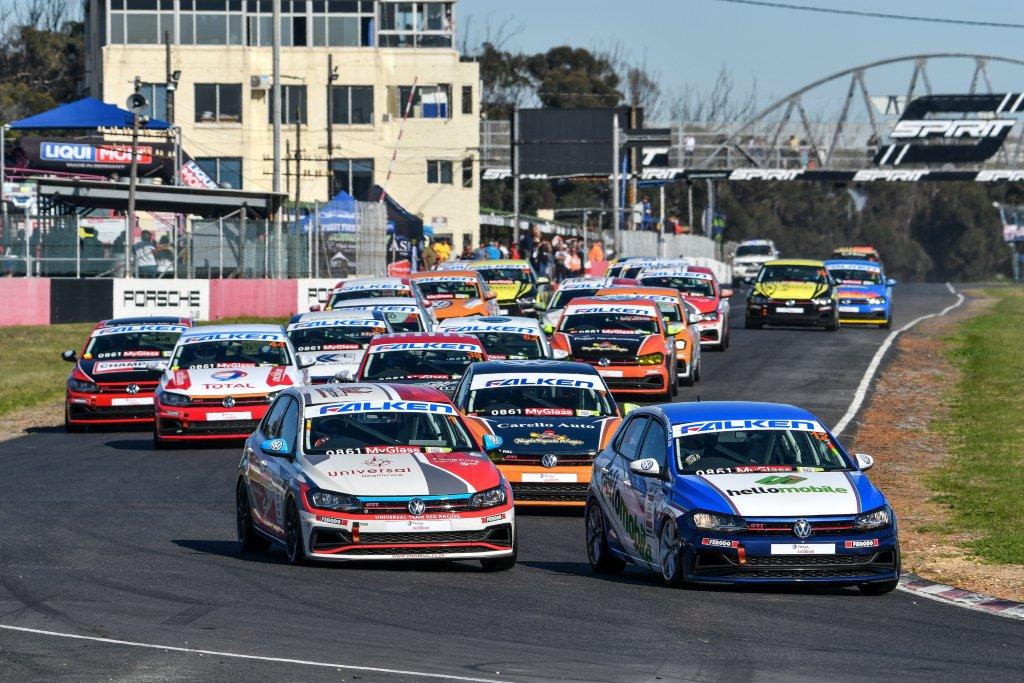 Brian Joss – The country’s most hotly-contested racing series, the Falken Polo Cup most certainly lived up to and exceeded expectations during an action-packed Round Three of the Extreme Festival at Cape Town’s famed Killarney Raceway where passionate racefans were once again treated to some spectacular battles throughout the field of 25 identical Volkswagen Polos.

It was clear throughout the practice sessions that the fast nature of Cape Town’s Killarney circuit would dish up the kind of drama that it did and after Saturday’s qualifying session no less than 17 drivers all found themselves within the very same second. Local driver Jurie Swart initially topped the timesheets ahead of Bradley Liebenberg and another local man in the form of Dario Busi with championship leader Jeffrey Kruger in an uncharacteristic fifth place, albeit only three tenths of a second off the pace. Part of the Falken Polo Cup spectacle is the superpole qualifying session in which the top six from regular qualifying gets one flying lap each to determine their final starting positions. This time it was Matt Shorter who set the fastest time, but his car was found to be a mere 2 kilograms underweight that led to a penalty that dropped him down the order.

This handed pole position to Bradley Liebenberg while Jeffrey Kruger managed to improve to second place, ahead of Jurie Swart and Jason Campos with Capetonian Dario Busi rounding out the top 5.

In a series as competitive as the Falken Polo Cup, qualifying is extremely important, but not as important as how you exit the first corner of the first race. Unfortunately for Bradley Liebenberg who started from pole position there was contact between him and another competitor in turn 1 which removed him from the fight for the rest of the race. This left Jeffrey Kruger with the provisional lead. At this point, everyone thought that the defending champion would run away with it, but local man Jurie Swart had other plans. The Capetonian put his local knowledge to good use as he muscled his way past Kruger an into the lead which he kept until the chequered flag. It was a popular victory for Swart with Kruger happy to claim the points that came with a second place finish. Local driver Dario Busi claimed the final podium position, ahead of Clinton Bezuidenhout and Keegan Campos.

If race one was anything to go by, race two had all the makings to be even better, and it didn’t disappoint. It started with one of the Oates twins Justin making a run for it over the first few laps with Bradley Liebenberg in hot pursuit. The chasing pack was never far away with several identical Volkswagen Polos all trying to occupy the same pieces of Killarney tarmac around every corner. The race was red flagged after contact between Nathan Hammond and Simon Need that left their two Polos stranded at the end of the pit straight. After the restart, it was Bradley Liebenberg who moved to the front ahead of Oates, and that’s how they crossed the finish line with Chris Shorter taking third ahead of Jeffrey Kruger and Clinton Bezuidenhout.

The overall results of Falken Polo Cup racing are only determined when race times for the two races are combined and after the calculations were made, it was Kruger who cemented his place at the top of the points standings with yet another overall victory. Unfortunately for Justin Oates, his name dropped down the order following a penalty for an incident in race one. This meant that a consistent Clinton Bezuidenhout claimed second ahead of Capetonian Dario Busi. Volkswagen Motorsport’s Jonathan Mogotsi returned to form with a very consistent day behind the wheel that earned him the points that came with fourth overall, just ahead of Keegan Campos.

“It was a great day of very competitive racing in Cape Town with a number of drivers all fighting very hard for victories. In the end and although for once he didn’t win a race on the day, Jeffrey Kruger showed why he is both the defending champion as well as the current points leader,” concluded Rowe.

The next round fo the Falken Polo Cup is scheduled to take place at the Aldo Scribante circuit in Port Elizabeth on June 15.