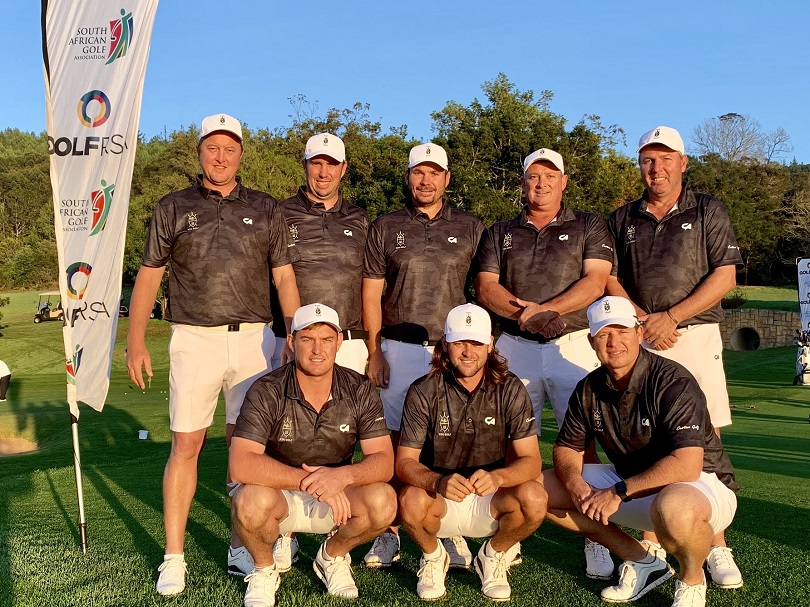 PLETTENBERG BAY, 13 May 2019 – KwaZulu-Natal and North West made a winning start at Plettenberg Bay Country Club on Monday, while Mpumalanga and Boland deadlocked on 2 points each in the battle for promotion on day one of the SA Country Districts.

Looking to repeat their winning performance at San Lameer Country Club in 2017, KwaZulu-Natal laid down a marker with a rousing 9.5 – 2.5 victory over Free State, while the defending champions defeated Limpopo 8 – 4.

KwaZulu-Natal made an early statement, dominating the foursomes, and took a 3-1 lead into the afternoon session.

Heindrich Erasmus clawed a point back for Free State when he beat Thomas Lovett 4 & 2, but Corne van Deventer kept KwaZulu-Natal on a winning course with a 4 & 3 win. Sean Baker, Koenie Erasmus, Phillip Barnes, Jens Hillerman and Jason Gilliver continued the pounding and took their tally to 9 points.

Ryno Crous halved against Jacques Schutte to ensure a crushing victory and KwaZulu-Natal will look to continue their rampage when they face Limpopo in round two.

North West hoped to pick up where they left off in Potchefstroom last year, but the 2018 champions had some work to do after Limpopo squared the foursomes 2-all.

The defending champions will go up against last year’s B-Section winners Northern Cape on Tuesday, while Free State has a bye.

Mpumalanga signalled their intent to get back in the A-Section with a blistering start in Plettenberg Bay, while Boland scored a decisive 8 – 4 victory against Eastern Province.

Taking a 3-1 lead into the foursomes, Anton Steenkamp set the tone for Mpumalanga when he mowed down Denzel Erasmus 5 & 4.

Drikus Joubert at number one halved his match against Oswin Schlenkrich, guaranteeing a 9.5 – 2.5 start for Mpumalanga in the promotion battle.

Boland had the early edge after winning three games in the morning session, but Eastern Province put up a fight in the singles.

Boland number eight Clement de Bruin downed Manie Daniels 6 & 4, but Gregory Manuel hit back for Boland and defeated Jaco Pieters 5 & 3. Malan Potgieter shrunk the deficit to 1 point when he knocked out Ryk van Schoor 4 & 3, but number one Daniel Cronje put Boland back on course with a 3 & 1 win against Rhalf Manuel.

The host union had a first round bye and will face Mpumalanga on day two, while Border and Boland go head-to-head and Eastern Province enjoys their rest day.

PHOTO – KwaZulu-Natal made a blistering start in the A-Section battle for glory at the 2019 SA Country Districts at Plettenberg Bay Country Club; credit GolfRSA.